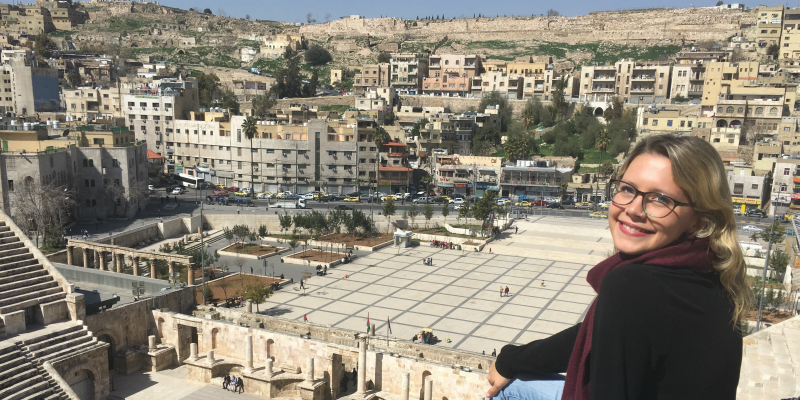 Charis Jones '18 overlooking the city of Amman, Jordan. She is the first UVM student to study in the United Arab Emirates.

Charis Jones grew up in Manhattan so she is no stranger to life in a culturally diverse environment. But she’s never experienced such a rich melting pot as the United Arab Emirates, where she is studying this semester at the American University of Sharjah.

“I’m sure a lot of it has to do with proximity to Dubai, which is this huge modern city with businesspeople from all over the world,” she said. “Only about 15% of the UAE population are Emerati. At the university, I’m making friends with people from Europe, the Middle East and Africa.”

When she considered a semester abroad, she embraced the notion of getting out of her comfort zone.

“I wanted to lose myself in a totally unfamiliar culture,” she said. “I also liked the idea of being around people who were dramatically different from me. For the first time in my life I know what it feels like to be a minority. I think it’s important to experience that.”

Jones is the first UVM student to study in the UAE, a monarchy made up of seven small sheikdoms on the Persian Gulf that were English protectorates until 1971 when the country gained independence. She admits the environment is a startling contrast to the northeast where she’s spent most of her life.

“The heat can be really shocking and it’s still spring here,” she says. “You can get temperatures in 120-degree Fahrenheit range during the summer months.”

But she also overwhelmed with the dryad beauty of the desert and the friendliness of the local population.

Jones is studying Islamic culture and learning how to speak Arabic. It’s a beautiful and rhythmic language, she says, but for English speakers shaping the proper sounds involve unfamiliar oral gymnastics.

“It’s so different from English, you have to let go of everything you think you know about language,” she says. “I’m using parts of my throat I’ve never used before.”

Kevin C. Coburn
“I liked the idea of being around people who were dramatically different from me. For the first time in my life I know what it feels like to be a minority. I think it’s important to experience that.” - Charis Jones '18 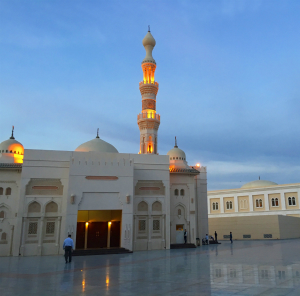 A night view of the campus mosque on the grounds of American University of Sharjah.