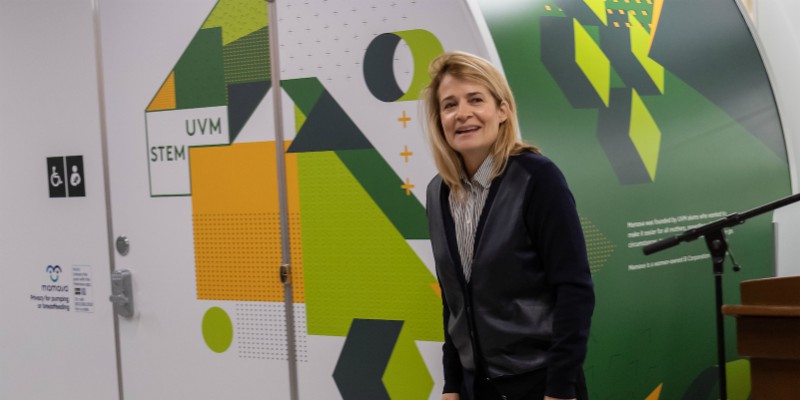 Sascha Mayer ‘93 after speaking at an unveiling of a Mamava pod inside UVM’s Discovery Hall last fall. UVM’s staff council raised funds for installation of two pods on the UVM campus—one in Discovery and one on UVM’s athletic campus.

Mamava headquarters at 180 Battery Street in Burlington exudes the energy and bustle you’d expect of a startup enterprise. Early on a recent Monday morning, Sascha Mayer ‘93 settles into a quiet corner of a large, open workspace with a stunning view of Lake Champlain. The smell of fresh paint wafts down a nearby hallway—new quarters are being prepared to accommodate a workforce that now numbers over 40 people.

There are no spacious corner suites even for the company founders. Mayer, company CEO, and her longtime business partner Christine Dodson, COO, sit opposite each other at a shared desk just large enough to park laptops and coffee mugs. A nameplate on Mayer’s desk reads “Mom Boss”

Mayer is a mom herself—she and her husband Aron Merrill ‘90 have two children, and there’s a symmetry between her personal and professional lives. Mamava designs, builds and services lactation pods for nursing mothers. Because the pods are portable and easy to assemble, they can be installed wherever there’s a 26-square-foot space in a mall, an office, an arena, or a university building. Their innovation is informed by their personal experience of working and raising a family, a balance that can be easily thrown into chaos for women committed to breastfeeding.

Production of breast milk is a “use it or lose it” proposition—women need to pump throughout the day at roughly the same rate at which a baby feeds in order to maintain their milk supply. Mayer and Dodson, a mother of three, say they have pumped at trade shows, airports, corporate retreats and baseball games, even in the back seat of a car owned by one of their business clients.

“Aside from the social discomfort many mothers have about pumping in public, the process is logistically hard,” Mayer says. “You need to plug the pump in, assemble it, attach the apparatus, store the milk safely. God love you if you can do it all gracefully.”

Mayer refers to the Mamava pod as a new “product category” (it’s not just a better mousetrap, it’s the only mousetrap on the market), and the market is responding. Mamava was founded in 2013 and didn’t hire its first paid employee until 2015. But by the spring of 2020, the company had sold 1300 units in 48 states.

Mayer grew up in Athens, Ohio, and went to high school in suburban Albany, N.Y., and her high school years were defined by a strong social justice ethos and playing on the field hockey team. During her college search, a drive up Route 22A through the lower Champlain Valley was her first real introduction to Vermont and UVM.

“I can remember almost giggling about how perfectly the landscape reflected what I thought Vermont should look like,” she recalls. “A lot of places you visit don’t measure up to the mystique—Vermont really delivered.”

UVM proved to be a perfect fit for her academic, social and athletic interests. Mayer played Division I field hockey while majoring in sociology and minoring in women’s studies. She also formed lasting friendships with progressive-minded peers who shared a passion for equality and social justice.

“Another motivating factor was that I knew Vermont had one of the first female governors,” Mayer recalls. “Being from New York I heard a lot about what Madeline Kunin (now a Distinguished Visiting Professor at UVM) was doing. I felt like Vermont would be the right place for me.”

During her senior year at UVM she interned for Burlington’s incumbent Democratic mayor Peter Clavelle—until he lost his bid for re-election in mid-semester. She ended up answering phones for Republican Peter Brownell instead. The job led to introductions to members of Bernie Sanders’ office staff at a time when Sanders was running for a second term as Vermont’s Congressional representative.

“That’s how I got recruited to be a receptionist for Bernie Sanders. The day after I graduated, I started working for his Burlington office.”

Deciding she was more suited to the private sector than politics, Mayer migrated to the Burlington firm JDK Design. A daughter of two artists, the design business came naturally to her. Mayer’s focus evolved from account management to brand strategy, an emerging role in design firms that emphasized deep market research.

“That’s where the sociology background came in,” she says. “Many brand strategists seem to have a sociology or anthropology degree. One of my clients was Seventh Generation which was developing a line of diapers. So I’d go into homes and talk with people about how they kept house, what was important to them, what their challenges were.”

The spark for Mamava came on Labor Day, 2006, when Mayer read a New York Times feature outlining the challenges mothers faced trying to breastfeed after returning to work. The piece struck a nerve for Mayer who at the time was nursing her second child. It also opened her eyes to a class system that had emerged in the United States around breastfeeding.

“If you had autonomy in your position and an office door you could close, maybe you could meet your breastfeeding goals,” Mayer said. “But so many women work for an hourly wage, or they don’t have support or privacy at work. That realization got me back to my activist, progressive roots. It just didn’t sit right and I decided I was going to do something about it.”

She and Dodson, a colleague at JDK, went to work designing something that could make breastfeeding a sustainable activity for working mothers. There were false starts and many distractions—“we were raising those babies and there was also a recession in there”—but they doggedly moved ahead with research and prototyping.

Initially they worked with a company that had been building kiosks for malls that understood the importance of modularity. One of the first prototypes looked disappointingly like a port-o-potty.

“We wanted the product to telegraph something that was really new,” Mayer explained. “That’s why the shape was so important. We were looking for a different design gesture that people hadn’t seen before.”

Through their association with top corporate clients at JDK, they had already received a crash course in organizational development. They worked with national companies like Merrill Footwear (Wolverine Worldwide), Levi's, Lululemon, Nike, and Burlington-based Burton Snowboards.

“We got to visit the campuses of these organizations and saw what worked and what didn’t work. It all informed how we built Mamava.”

The finished Mamava product has a clean, curvy design reminiscent of an airstream camper. The unit rests on castors, so it can be wheeled from location to location. The interior is customized for mom's comfort with adjustable heat controls and ventilation, easy-to-clean Corian surfaces, and USB outlets to recharge electronic devices. There are four models in the company’s online catalog including an ADA version wide enough to accommodate a wheelchair, a Mamava Solo (more compact and suited for work spaces) and a "Mamava-mini" designed for installation in an existing lactation or wellness room.

The company has a mobile app where customers can find pod locations and 5,000 other lactation rooms across the country. Mamava pods are built by Springfield, Vt. plant Konrad Prefab, so the units are a true Vermont enterprise from design to fabrication.

Mayer sees the company as not just filling a product niche, but advocating for choice and freedom for women in the workplace—the company motto is “nursing should be a right, not a privilege.” Their aims received a legislative boost when Congress passed the Fair Labor Act in 2010 which includes provisions for breastfeeding.

“One of the challenges was this tough conversation around women’s bodies, and health and wellness,” Mayer explained. “We wanted it to be about choice, not about judgement—if you don’t breastfeed, that’s fine. If you, do that’s fine, too. But if you do, let’s make sure there is the infrastructure and support out there.”

Mayer and Dodson worried initially that the Mamava concept might be misinterpreted as a way of hiding pumping and breastfeeding from public view.

“What happened was actually the opposite,” Mayer said. “Because of the disruptive nature of the design, I think the pods represent this form of choice architecture that elevates the conversation around breastfeeding and brings it front and center.”

On February 4, Mayer and several of her associates (at least seven UVM alumni work at the company) attended a small opening ceremony that celebrated the Mamava pod installed near a highly-trafficked area in the new STEM complex on central campus. It is open for use for UVM employees who are nursing, and other area moms. UVM installed another pod in the athletics center.

“It struck me that if this beautiful new building had been installed with a lactation room, it might have been hidden away in a corner somewhere,” said Mayer. “The pod’s location encourages discussion. And how apropos for a life science building, right? I mean we’re talking about this super important biological function that supports life.”

Note: This story was written just before the onset of COVID-19, which required many businesses, including Mamava, to shift to a work-from-home model. Although the virus has forced the company to put austerity measures in place, Mayer says “I am proud to report that we’ve kept all 40 employees on the payroll.”

Kevin Coburn
“One of the challenges was this tough conversation around women’s bodies, and health and wellness. We wanted it to be about choice, not about judgement—if you don’t breast feed, that’s fine . . . but if you do, let’s make sure there is the infrastructure and support out there.” -- Sascha Mayer '93 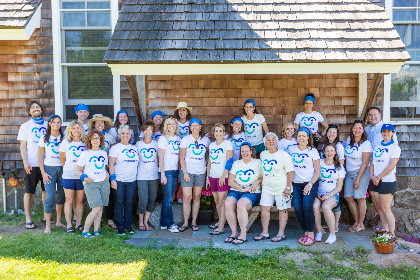 The Mamava staff at an event last summer. The Burlington-based company has since grown to 40 employees—along with Mayer, seven of them have UVM connections. 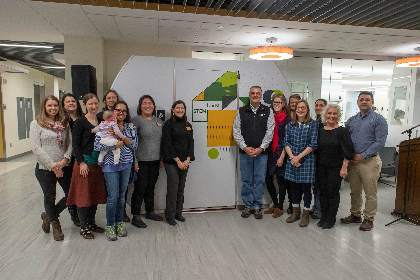 Members of the UVM Staff Council who created a proposal to acquire two Mamava pods for the UVM campus.