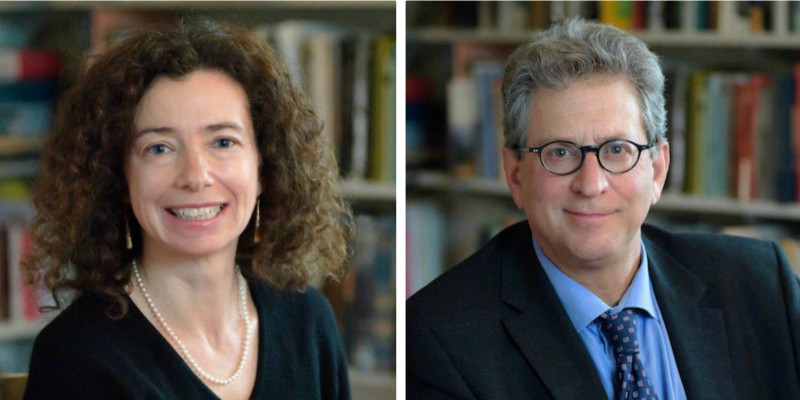 Two members of the UVM history department and the UVM Miller Center for Holocaust Studies have been invited by the Jack, Joseph and Morton Mandel Center for Advanced Holocaust Studies of the U.S. Holocaust Memorial Museum in Washington, D.C. to take up prestigious research fellowships in the fall 2018 semester.

Associate Professor Susanna Schrafstetter will be the Judith B. and Burton P. Resnick Invitational Scholar for the Study of Anti-Semitism while working on her project “Seeking Survival in the South: German-Jewish Refugees in Italy, 1933-1950.”

Professor Alan Steinweis, who is also the Director of the Miller Center for Holocaust Studies, will hold the Ina Levine Invitational Senior Fellowship, which he will use to work on several research and writing projects related to Nazi Germany and the Holocaust. Both scholars will be in residence at the Mandel Center in Washington, D.C. from September through December 2018.

Schrafstetter’s project focuses on the thousands of Jews from Germany who fled from National Socialist persecution between 1933 and 1940 to Fascist Italy. For the majority of these individuals Italy served as a temporary refuge, but a substantial number of Jewish refugees from Germany and other European countries remained in the country until the end of the Second World War. Following the Italian entry into WWII in 1940, they experienced internment, and, after the German occupation of Italy in September of 1943, they faced arrest and deportation to Auschwitz. Schrafstetter will explore questions including the reasons German Jews fled to Fascist Italy, and how they perceived everyday life as refugees and internees in Italy.

Steinweis is writing a book on the history of Nazi Germany now under contract with Cambridge University Press. The book will contain extensive sections about Nazi racial policy and the Holocaust, but will situate those topics in the broader historical context of the Nazi regime. He will also begin research on a new project about Georg Elser, a German cabinetmaker who came close to assassinating Hitler in November 1939. Steinweis says Elser’s story has received much less attention than the failed attempt on Hitler’s life by German military officers in July 1944. His work will focus on Elser’s actions in 1939 while exploring why it took so long for post-war German society to honor his deed.

“We're delighted to welcome Dr. Schrafstetter and Dr. Steinweis to the Mandel Center as research fellows this fall,” said Dr. Wendy Lower, Interim Director of the Jack, Joseph and Morton Mandel Center for Advanced Holocaust Studies. “Each day the U.S. Holocaust Memorial Museum receives new material on the Holocaust, arriving from around the globe. Professors Schrafstetter and Steinweis will benefit from our extensive holdings and in turn, their research findings will enrich our understanding of how and why the Holocaust happened."

The Carolyn and Leonard Miller Center for Holocaust Studies at the University of Vermont promotes scholarship, education, and public awareness about the Holocaust. Drawing upon the expertise of a distinguished faculty from across the university, the Miller Center offers an undergraduate minor field in Holocaust Studies and supports graduate training in the disciplinary departments.

The Jack, Joseph and Morton Mandel Center for Advanced Holocaust Studies is an integral part of the Holocaust Museum, supporting scholarship and publications in Holocaust studies, promoting the growth of Holocaust studies at American universities, and initiating programs to ensure the ongoing training of future generations of scholars specializing in the Holocaust.