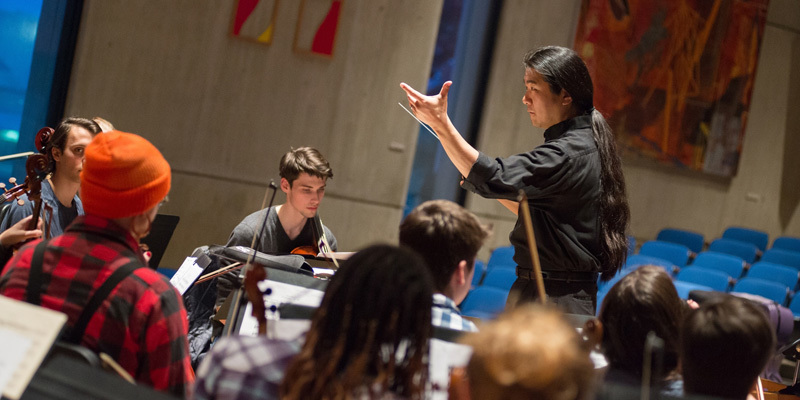 UVM’s Symphony Orchestra had practiced intensively for an April 4 performance when COVID-19 intervened. Orchestra members were devastated, said conductor Yutaka Kono, when they learned they couldn’t play together as a group. Kono, who is also an instructor in the music department’s music technology program, decided he would have to do something “unique” to fill the void.

The annual spring concert for the UVM Symphony Orchestra scheduled for Saturday, April 4th in Southwick Music Hall had been cancelled due to COVID-19. So Yutaka Kono, director of orchestra and associate professor of music at UVM, challenged his students to send in a recording of their part in “Pictures at an Exhibition” by composer Modest Mussorgsky, one of the pieces planned for the concert.

The problem for Stephan Toljan ’22, finishing up his semester in Rhode Island, was that he’d left his French horn in Burlington. He sent an empty box via UPS to a friend still in Burlington and asked him to pack up the horn and send it to his home address. The instrument arrived the day before Toljan’s piece of the musical puzzle was due, and following Kono’s meticulous instructions, managed to email his Mp4 sound file by the deadline.

It was one of 72 files Kono received from orchestra members, which he knit together in a virtual performance of Mussorgsky now available on YouTube.

“It took me several days to mix them all,” Kono said. “Since they don’t all have professional recording equipment, I had to make sure that each of the players sounded well by going through each recording in detail.”

The degree of difficulty was especially high for orchestra members like Toljan who didn’t have their instruments at home. Some used backup instruments they hadn’t played in years, or borrowed from musicians in their community. Percussionists Preston Murphy '20, who plays triangle, and Ally Dovano '22, who plays the gong and the chime, had to improvise.

“Ally sent me a recording of her gong part using kitchen pots and pans. I had to alter those sounds to make it somewhat like the intended instruments,” said Kono.

Dovano used her marimba mallets to roll on the bottom of a kettle in a large room to mimic the sound of a gong.

Murphy found an easel gathering dust in the basement held up by three metal poles. He began experimenting, and discovered that striking two of the columns with a pencil produced something resembling the triangle. “I felt part of the fun from the assignment was to figure out how to get as close as possible to the triangle sound,” he said.

Kono said cellphone microphones don’t capture the deep sound of the acoustic basses very well, and some students only had access to electric bass or bass guitar.

“Still, all the sound on that recording was created from raw sound by the musicians. I didn’t add any computer-generated tones,” he said.

Typically the conductor sets the tempo for live performances, providing cues to the musicians. To make sure his students played in unison, Kono sent them a metronome which produced a steady beat to help them maintain a uniform pace.

“Nothing can replace a concert with 70 dedicated and hard-working musicians creating sounds together that only can be heard at the moment,” Kono said. “I think that recordings like this are a marvelous way to remember that we are still together for this incredible art form in a time we have to stay completely apart physically.”

Kevin Coburn
“I think that recordings like this are a marvelous way to remember that we are still together for this incredible art form in a time we have to stay completely apart physically.” - Yutaka Kono