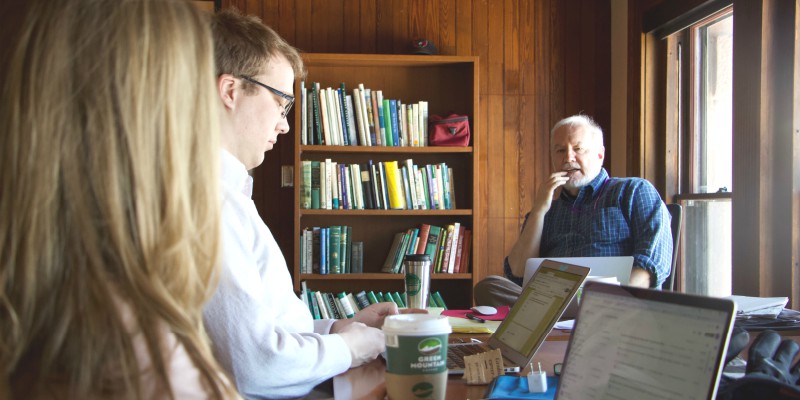 “I’m not sure how to ask this question and not offend the city councilor,” one student asked. “What do we do if the source says ‘call me back at six’ and then doesn’t answer the phone?,” asked another. “How and when do we name the survivors of sexual assaults?”

These are the type of questions that come up during the noontime news meeting that Senior VT Digger Editor Jim Welch convenes every Friday with a group of students interested in news and journalism.

Joey Waldinger, a senior environmental studies major, takes advantage of the noon meeting most Fridays. He is working as a reporter at The Other Paper—a small community-based paper in South Burlington as part of his capstone internship experience.

“Meeting with Jim is a great opportunity to learn about the ethics of journalism, and to get an inside look into the editorial thought process that student journalists don’t often have access to,” Waldinger said. “Jim will discuss ethical dilemmas that wouldn’t ever occur to me, like whether to include or omit the names of the victims in a story about sexual assault, which in turn makes me more conscientious about my work.”

Caroline Slack, a sophomore English major who plans to get into journalism, likes hearing directly how reporters work.

“Reporters have a duty to inform the public of dangerous individuals and crime in their area, but reporters must also choose when to omit information to protect others. This is a fine line to draw, and it's been really helpful to me as an aspiring journalist to have these questions of ethics posed.”

“My experience at VT Digger has given me real-world, fast paced reporting experience and the staff has helped me with my writing. I’ve covered some really difficult issues, but they have been extremely rewarding.”

For Welch, who started his journalism career in Burlington as an editor at the Free Press, it brings his work back full circle. In the 1980s, Jim volunteered as an advisor to UVM’s student paper The Vermont Cynic. Eric Lipton, a two-time Pulitzer winning reporter at the New York Times, was an editor then. He used to ask the same questions, Jim said.

“The business has changed but the essence of a good and fair story remains the same,” Jim said.

These conversations take place in the new renovated Billings Library which has become the center of the new CAS minor in reporting and documentary storytelling.

That’s the kind of experience that students find invaluable.

“The most helpful aspect of interning at the Other Paper has been my exposure to the variety of stories a professional journalist encounters,” Waldinger said. “I like being a journalist because I learn something new every time I report a story. Sometimes my assignments are rather whimsical, such as when I ventured into a sugarbush and learned how to tap maple sap, and sometimes a little more tedious, as some Selectboard and City Council meetings can last for hours. Nonetheless, it’s exciting to head into an assignment knowing that something completely unexpected might happen.”

Some students are already using their internship experiences in their job hunts. English major Ashley Miller has been covering high school sports for a small local paper, the Hinesburg Record.

She was able to parlay that experience into an internship with the Philadelphia 76'ers summer farm team where she will be helping with game recaps, social media, and press releases.

“During the interview process, both hiring managers were impressed with my current internship at the Hinesburg Record, especially being able to easily show them the website and have them view the wide-range of stories I've produced,” Miller said.

Waldinger is also looking for a newspaper job and said that the experience has been helpful in several ways.

“I've realized how many similar papers there are to the Other Paper scattered around the U.S., and how the work I've been doing for the OP and skills I've picked up transfer to countless of these smaller community papers. For instance, when I started at the OP, I was surprised at how many photos I was assigned to take, but I now see that this is requisite at all similar newspapers, as they just can't afford to hire journalists and photojournalists separately.”

The new reporting and documentary storytelling minor is co-directed by Professor of English Greg Bottoms, Associate Professor of Film and Television Studies Deb Ellis, and Director for the Center on Research on Vermont Richard Watts.

Richard Watts
"My experience at VT Digger has given me real-world, fast paced reporting experience and the staff has helped me with my writing. I've covered some really difficult issues, but they have been extremely rewarding." - Luke Zarzecki '21 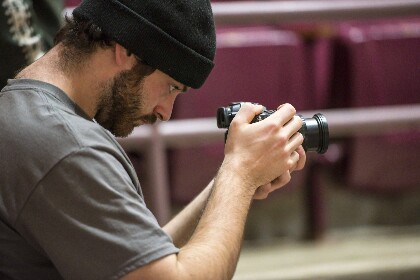