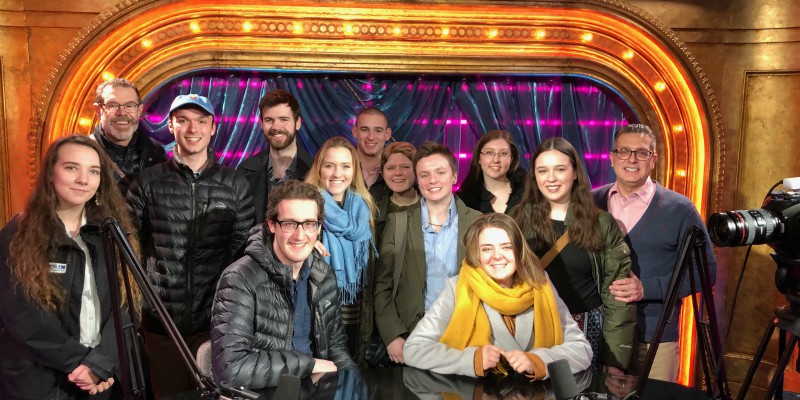 Students in Craig Wells’ “The Business of Show Business” class with Bob Bucci (right) in the studio of Broadway.com, where interviews and other Broadway news items are filmed. Bucci was one of several theatre professionals students met with in a recent trip to New York City.

Eleven students in Craig Wells’ “The Business of Show Business” course spent part of their spring break in New York feasting on theatre—the group managed to squeeze in four shows in three days.

But the moments in between the performances were just as memorable. Wells introduced the students to several behind-the-scenes professionals in the industry who play roles essential to successful productions.

“So many people ask ‘why study theatre?’” said Wells. “But the business side of it—like producing, marketing, P.R., casting—provides many opportunities in a profession that often gets a bad rap for not employing people.”

Daily meetings with these high-level corporate pros helped students realize that their passion for theatre and the arts has many potential outlets for rewarding careers.

That was certainly a key takeaway for Julia Kitonis ’21, who has long been involved in theatre as a performer and a playwright. She’s working this spring as marketing coordinator for the theatre department’s 2019 Spring Play Festival April 27-28.

“Theatre is a ‘team sport’—there are a lot of different contributors that have to all work together put on a show,” Kitonis said. “I really wanted to take a class about the business side of the industry.”

Most illuminating for her was a meeting with Merri Sugarman, casting director at Tara Rubin Casting. Sugarman supervised the casting for “Ain’t Too Proud” a show based on the Motown group The Temptations (the UVM group had seen the show the previous night). Sugarman began as an actor and moved into casting, eventually working as casting executive in charge at Dreamworks studios. At Tara Rubin she works with Broadway, off-Broadway, and national tours.

“It was an interesting look behind the scenes at how auditions work and how parts get awarded,” Kitonis said. “As a performer, when you leave an audition you usually have no idea how well you did. She related to us all the factors that go into casting—in many ways the actor has very little control of the process.”

Wells steered clear of the flashy, long-running Broadway productions, bringing students instead to shows that provided opportunities to analyze factors that can lead to Broadway success—or failure.

Besides “Ain’t Too Proud,” the group saw “The Ferryman,” a drama based on the life of a Northern Irish family in the 1980’s swept up in The Troubles; “Come from Away,” a musical based on the true story of 38 airliners diverted to remote Gander, Newfoundland, in the midst of the 9-11 terror attacks; and “The Prom,” in which a group of fading Broadway stars are inspired to set things right in a small Indiana town that has barred two girls from going to the junior prom together.

“What’s fun about the class is we review the box office receipts from each of the shows, and analyze which shows are succeeding and which are struggling,” explained Wells. “We’ll discuss why it’s important for a show that’s hanging on by its fingertips to get a Tony nomination, which might completely change box office demand.”

Three of the four shows that the students attended are eligible for a nomination this year—finalists are announced in late April. Publicity from a Tony nomination can give a production a life-saving shot in the arm.

A Bevy of Experts

Wells spent twenty years as a professional actor in New York appearing in shows on and off-Broadway, and he describes the theatre milieu as a small world.

“If it’s six degrees of separation for Kevin Bacon, it’s about two degrees for theater people in New York,” he said.

Most of the workshops with industry professionals were arranged through various connections from his years in the industry.

Trish Santini is Executive Director of Pier55, a new park and non-profit arts organization slated to open in 2020. Santini went to school to pursue a dance and theatre career and discovered a latent talent for organizing and producing shows off-Broadway. She was hired as senior producer at the Guthrie Theatre and was eventually recruited by Barry Diller and the Diller-von Furstenberg Family Foundation to lead the Pier55 project.

“I wanted students to meet her because she took a non-linear career path,” said Wells. “She’s funny and personable and present – you want to work with her.”

Students met with Chris Boneau of Boneau/Bryan-Brown (BBB), a public relations business that has represented over 400 plays and musicals which have won a total of 222 Tony Awards and 11 Pulitzer Prizes. A public relations strategist, he leads the media training team at BBB and provided an overview of the role of the publicist in the theatre (one of the firm’s clients is “The Ferryman”).

The group also met with Adam Ball and Erik Gensler of Capacity Interactive, a company specializing in digital media. Gensler, the company president, founded Digital Marketing Boot Camp for the Arts, the only conference entirely focused on digital marketing for arts and cultural organizations. Bob Bucci of Broadway Across America also started off as an actor and transitionedto the marketing side of the industry 20 years ago. He now oversees 38 markets across North America promoting signature shows including “Chicago,” “The Book of Mormon,” “Hamilton” and “Aladdin.”

Renowned producer Larry Hirschhorn recounted his own experience as a frustrated actor. His epiphany came while he was working in dinner theatre in Florida while his wife was in New York, pregnant with their first child. He gave up on his acting career, got a masters at NYU, built a theatre company, and went on to become a sought-after producer, picking up three Tony Awards during his career. He spoke about the special challenges of the producer, a role that entails fundraising, management, and generally serving as the CEO of a production. Hirschhorn also has a UVM connection – his son Josh is a UVM junior.

Actor and Tony Award Winner Beth Leavel took students behind the scenes of another show the group saw. She played Dee Dee Allen, a lead role in “Prom.”

This is the first time Wells has offered “The Business of Show Business” course and he sees it as an important component in a well-rounded theatre curriculum.

“I think the take home was that if you’re really passionate about theatre you can find a niche for yourself, not just in New York, which is what people strive for, but also on a local level. We need great theatre in our home towns, too, and local companies also need designers, managers, producers and directors.”

Kevin Coburn
“Theatre is a ‘team sport’—there are a lot of different contributors that have to all work together to put on a show. I really wanted to take a class about the business side of the industry.” - Julia Kitonis '21 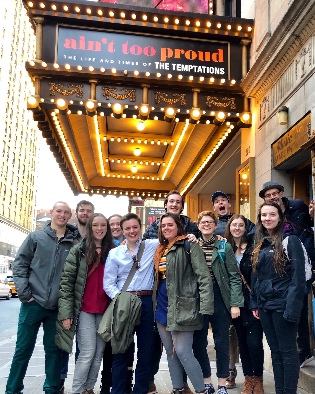 Students congregate in front of the marquee at the Imperial Theater in New York.