Room with a View 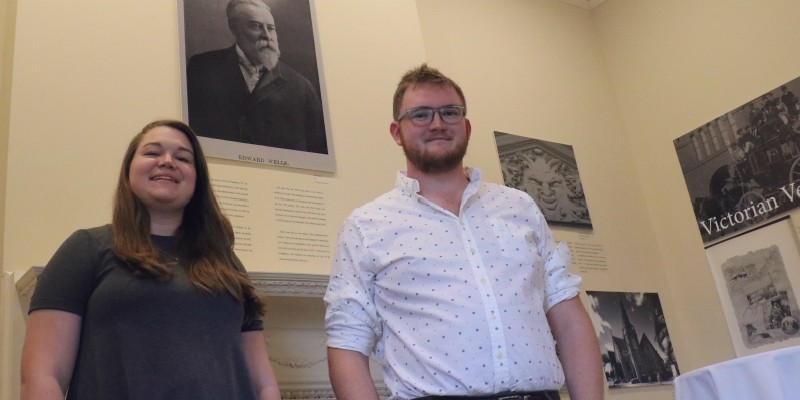 Jesse Keel and Evan Haley in UVM's Alumni House. The duo created an exhibit that tells the story of the house in three chapters.

As history majors, Evan Haley and Jesse Keel were happy to call UVM’s magnificently restored Alumni House a second home during their spring semester internship last year. “We spent so much time here,” Keel remarks as she revisits the permanent exhibit she and Haley were deeply absorbed in creating at the time.

Their assignment was to develop a historical overview of the building at 61 Summit Street for the thousands of people who visit each year, a history that covers several different chapters—as the private home of its builder Edward Wells in the late 1890’s, as the Delta Psi fraternity house from 1924-2003, and as home base for UVM alumni since 2007.

“Alan Ryea (vice-president for alumni relations) and Patrick Maguire (operations manager for Alumni House) gave us some general ideas and guidelines. But we had lot of freedom to develop the story and create the exhibits,” said Haley.

Their palette was a mostly empty high-ceilinged sitting room just off the building’s main entrance. With only a few months to complete the project, the duo dove into research, plumbing UVM special collections for old documents, photographs and artifacts that could fill out the story. Gradually the idea of an exhibit consisting of text and images on the walls—with each chapter of the house’s history occupying a corner—emerged.

The exhibit explains that Edward Wells was a native of Waterbury, Vt., one of 10 children, who put down roots in Burlington and made his fortune in patent medicine and chemical dyes. He bought the land on Summit Street, a fashionable district for wealthy industrialists of the time. The building was completed by Christmas 1892 at a cost of $100,000 (Haley and Keel estimate Wells’ annual income was about $3 million).

This part of the exhibit naturally covers Vermont in the Victorian era, ideal territory for Keel who is a double major in English and history and has a special interest in English literature of the period, particularly women writers. Haley is concentrating his studies on the Austro-Hungarian Empire which roughly coincides with the Victorian Era.

“We definitely hit on the right time frame,” he said.

Among their discoveries was the local aspect of the project—much of the timber and stone was sourced from Vermont, and most of the craftspeople were local. The intricate wood carvings in the house, still in remarkable condition, were crafted by Albert Whittekind, later commissioned to create much of the interior woodwork in Billings.

“He was such a master that the architect would just add some squiggles in his blueprints to indicate where he wanted a carving to be. He pretty much let Whittekind fill in the blanks,” said Haley.

The UVM archives turned up some striking images like advertisements printed by Well’s dye company that retain their vivid color and detail. “The company was famous for its incredibly prolific and aggressive advertising campaigns,” reads the exhibit text. “These advertisements would have appeared in everything from the Ladies Home Journal to the Burlington Free Press.”

The Delta Psi chapter of the House’s history occupies another corner in the room. The fraternity was established in 1850 and bought the house from the Wells family in 1927. It attracted many leading lights in the university's history including UVM’s first African-American graduate, George Washington Henderson, the famous philosopher John Dewey, and Dudley H. Davis, for whom UVM's student center is named. When the fraternity became inactive in 2003, the building was sold to UVM in 2007. The university raised $13.5 million to renovate the building as Alumni House, another chapter in the exhibit story that includes compelling “before and after” photos of several rooms in the building taken during the restoration.

When they finally finished a draft of the exhibit text, they confronted the challenge every curator faces—how to get the text down to a readable level without losing the essence the story. “I think the draft was about 3000 to 4000 words, basically the length of a term paper,” said Keel. “We really had to learn how to economize with words. I think we did 4-5 drafts to cut it down to size.”

For this task they relied on the help of local museum professionals on campus like Margaret Tamulonis, manager of collections and exhibitions at the Fleming Museum. Daisy Benson, associate professor and subject librarian at the Bailey Howe Library, provided vital guidance in their exploration of the UVM archives. The students also made use of the library’s high-resolution scanners to enlarge and reprint some of the images—the large portrait of Edward Wells that serves as the centerpiece of the exhibit was reproduced from a printed photo just 2” inches square in size. To assemble and mount the exhibit, including applying the thin, transparent strips of lettering and text on the walls, they relied on patience, steady hands and a tape measure (“measure three times before applying” became Keel’s mantra).

Keel applied for the internship on a whim, but she calls the experience “one of the most valuable things I’ve done at UVM.” She is pursuing an accelerated master’s degree in English, a program which allows her to earn graduate credits during her senior year. In a little over a year from now she will have completed her master’s in addition to her B.A.

“I think it was the breadth of things we did in this internship that was so important—the research, the writing, the physical part of creating and mounting the exhibits, using the library and periodicals—I think there’s a lot of crossover between those skills and my future studies.”

Haley is applying to graduate schools in pursuit of a PhD in history. Working with history professor Nicole Phelps, he’s become fascinated by the political and cultural history of Austria, particularly the Austro-Hungarian Empire era. He sees it as a fertile area for new research that young scholars can contribute to early in their careers, and like Keel, he thinks his internship experience helped fine tune his abilities as a writer and researcher.

“I’m starting to apply to PhD programs now and this exhibit is something I can put down as an accomplishment that can set me apart from other applicants. It’s something tangible—like a piece of published work—that I can always point to.”

Kevin Coburn
“I’m starting to apply to PhD programs now and this exhibit is something I can put down as an accomplishment that can set me apart from other applicants. It’s something tangible—like a piece of published work—that I can always point to.” - Evan Haley '19