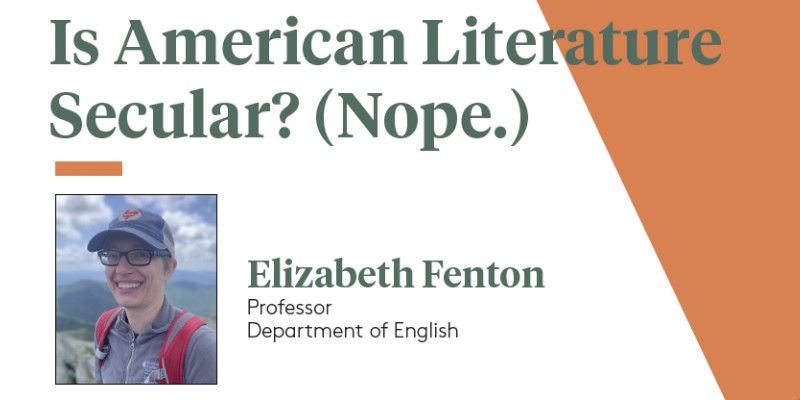 Professor Elizabeth Fenton delivers the first College of Arts and Sciences Full Professor lecture for 2019-20 on Wednesday, September 4th at 4:30 p.m. in Memorial Lounge, Waterman. The lecture series is designed to recognize CAS faculty newly promoted to full professor rank.Professor Fenton addresses questions including: What does it mean to say that literary studies is a secular pursuit? Is there a clear distinction between the religious and the secular? And what does religion have to do with the study of American literature? Fenton explores the different ways she has grappled with these questions in her work on the wide variety of literature produced in the early United States.

Isn’t the division of church and state a big part of the narrative of American democracy?

Yes, it’s right there in the Constitution. In the period I investigate, the Colonial period through the 19thcentury, there is a certain kind of story that the nation told itself about the ideal of church and state separation. But it wasn’t fully integrated into everyday life.

How does American literature address this dichotomy?

Literature is a place to explore the question of how people with different fundamental beliefs about the world can co-exist or not. There is a big gulf between the policy and on-the-ground practice of how religion interfaces with politics. Literature occupies a space in that gulf that can point us to a more accurate understanding of how people actually experience the church-state relationship. The concept of separation hadn’t been fully embraced even 50 years after the Constitution was signed. Massachusetts didn’t disestablish Congregationalism as the state religion until 1833. It was a very uneven process.

It sounds like there have always been debates about what religious liberty means.

I think the way that the national discourse around religious pluralism emerged in the U.S. grew out of anti-Catholicism. Protestants like Jefferson and Hamilton were trying to figure out how to define religious freedom—the thing they didn’twant was Catholicism. A lot of what they describe in their early writings about religion is a kind of caricature of Catholicism—a tyrannical Pope who tells everyone below him in the hierarchy what to believe . . .  Of course that’s not how Catholicism actually operated in that period, or today. But stereotypical ideas of Catholicism is what many early thinkers about religious liberty used as a backdrop for their own sense of ‘Oh, what we want is for everyone to make their own decisions about religion, that everyone has right to a private conscience, that people should be able to live near each other and not necessarily agree with each other.’ These all sound like strong values which we tend to think of as universal and neutral in the U.S., but when you drill into the rhetoric of the time what you find is this ugly underbelly that, in this period, reveals a real disdain for the Catholic. And that does translate into some policy decisions, like attempts to limit Catholic immigration.

How has that debate evolved?

I started working on this project after 9-11 and the rhetoric around Islam was pretty horrifying. In a lot of the 19th century writing that I’ve looked at, where there are explicitly anti-Catholic statements, you could almost do a search and replace with the word ‘Muslim’ and come up with the same argument against Islam. The rhetoric is strikingly similar—'they can’t assimilate into our system of beliefs,’ or ‘they will undo our system from within if we allow them to become citizens,’ or they ‘hate our freedom’ . . . That suggests that it’s not about a particular religion—there is something baked into the system of American democracy that demands a ‘religious other’ which allows us to perpetuate the narrative of its own religious liberty.

I developed that interest as an undergraduate here at UVM mostly in classes in English Renaissance century English literature. I was interested in conflicts between Catholics and Protestants in England, and later conflicts between different branches of Protestantism. I went to Rice University in Houston and I thought I was going to study Renaissance era literature. Then I took course on the 19-century American novel as an elective and it seemed to me that all the villains in our readings were Catholic. One day I asked the professor why, and she told me ‘I don’t know, but that could be a dissertation.

Elizabeth Fenton joined the faculty at UVM in 2007, after receiving her Ph.D. from Rice University and working at Loyola University Chicago. She specializes in the study of religion and literature and teaches courses in colonial American and early U.S. literature. She is the author of Religious Liberties: Anti- Catholicism and Liberal Democracy in Nineteenth-Century U.S. Literature and Culture (2011) and co-editor of Americanist Approaches to The Book of Mormon (2019). Her new book, Old Canaan in a New World: Native Americans and the Lost Tribes of Israel, is forthcoming from NYU Press in 2020.

Kevin Coburn
"Literature is a place to explore the question of how people with different fundamental beliefs about the world can co-exist or not." - Professor Elizabeth Fenton