Poetry of Resistance: Poems that can Change the World 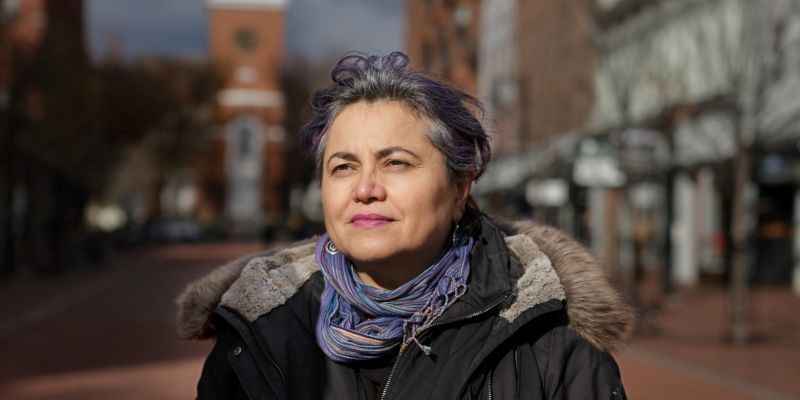 Tina Escaja is compelled by resistance. It’s a way of life that has manifested itself in her latest book, Resistencia: Poems of Protest and Revolution, which she co-edited with Mark Eisner. Her fight for equality is written across the pages through a diverse representation of poets.

“I work on resistance in my research, teaching, and writing,” Escaja said. “And it is a way of life that is happening now, and it has to continue,” Escaja,  Professor of Spanish and Director of the Gender, Sexuality and Women's Studies program said.

The inspiration for her current work started in the classroom. In looking for Latin American poetry that brought new voices to her students she was stunned by the focus on mostly white, male, heteronormative poets.

“I was very frustrated because this is not a true picture of the incredible possibilities of poetic voices in the world, but specifically over Latin America,” Escaja said.

Working to piece together authors and poets for her students to fill the gap, Escaja decided to bring those voices into a new anthology. One of her greatest frustrations was the lack of women's voices. While researching, she found women have bursts of presence before suddenly disappearing. Resistencia captures and reconnects with these lost voices.

Escaja uses the theme of resistance in Latin American politics by expanding, pushing it further, and spanning the deep chasms in gender, queer, indigenous ethnicity, race, language, and the ecological.

Escaja’s work takes into account the present as well as the past. It integrates the idea of resistance from the second part of the 20th Century up until today weaving in themes from the social environment during these times.

“We are visiting all these poets, but also we are paying attention to the context. The Latin American context, the political context, the historical, and cultural context. It’s very important to find and bring those connections forward as well.” Escaja said.

One poet that resonates with Escaja is Brigette Zacarías from the Atlantic coast of Nicaragua. Zacarías is Miskito, an indigenous group from the land that covers the coast. In this region, there are many languages and identities; however, its isolated nature made it difficult to get to. Despite this, Escaja didn’t stop at just her research. She set out to explore the poetry, which she found to her surprise Zacarías wrote first in Spanish later translating it to the Miskito language. It seems counterintuitive, Escaja said, but literacy often comes in Spanish since the Miskito language is primarily oral.

“Spanish became the language of empowerment and literacy for women in this region that didn't have that opportunity before to study. And then they self-translate to their native tongue. So that's just an anecdote of how things are different from what we expect.” Escaja said.

Resistencia: Poems of Protest and Revolution breaks conceptions and expectations just like this one. The collection of poems is entirely unique in the sheer range of diversity it encompasses. Escaja says she is greatly influenced and inspired by her own students as well as through her own research.

“It is part of my whole understanding of poetry and literature and humanity, of connecting with the community,” Escaja said.

Weaving together community after community, Escaja’s work takes up the torch of resistance just as the title suggests. Poetry is a potent tool and Escaja releases its power in a new and revolutionary way.

Olivia Nye is a junior with a double-major in Studio Art & English who enjoys writing creatively.