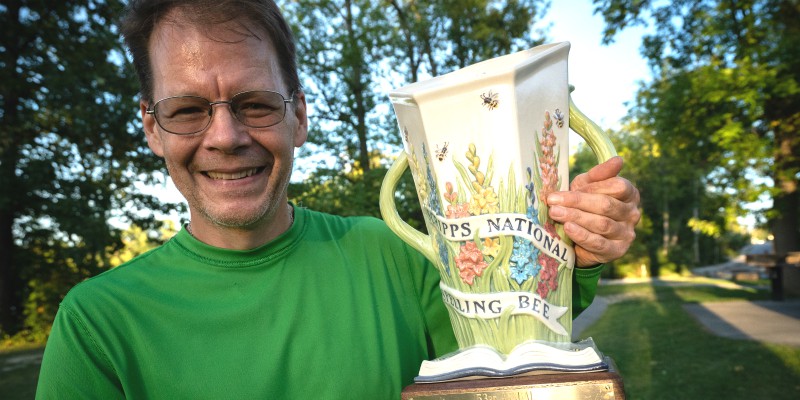 Classics Associate Professor Jacques Bailly hoists a special trophy given in honor of his long service to the Scripps National Spelling Bee. The presentation was made last evening at Burlington’s Oakledge Park—in attendance were students and faculty from the classics department. (Photo: Ian Thomas Jansen-Lonnquist)

In 1980, 14-year-old Jacques Bailly received an impressive trophy for winning the Scripps National Spelling Bee. Last evening, approximately 39 years later, he collected a second trophy in recognition of his service as chief “pronouncer” of the national spelling bee now televised live each year on ESPN.

The Scripps Cup was created by Rookwood Pottery Company in Cincinnati as the trophy for the winners of the Scripps National Spelling Bee. Rookwood Pottery wanted to recognize the contributions of Dr. Bailly to the bee and arranged for an additional trophy, just for him.

UVM Classics Chair John Franklin presented the trophy in a surprise presentation at the department’s fall semester get-together at Oakledge Park in Burlington.

“This trophy is just beautiful,” said an admiring Bailly of the award. “Actually it’s a lot nicer than the trophy I got as a 14-year-old.”

Bailly, associate professor of classics at UVM and director of graduate studies in the department, is a lifelong lover of words. His father came to the United States from France in 1948, and he spent time as a child studying French and visiting his relatives overseas.

After graduating from Brown, Bailly travelled to Switzerland on a Fulbright scholarship and picked up German. Later he studied ancient Greek, Latin, Arabic and Chinese while on his way to a doctorate in ancient philosophy from Cornell. Bailly moved to Vermont in 1997 to teach Greek and Roman philosophy, Latin, and etymology at UVM. He took over as Scripps' official pronouncer in 2003.

Bailly is something of a celebrity in spelling-bee circles, though the buzz is more muted on campus.

“For one week in the year, I have the most fantastic fan club,” he says of the annual runup to the national bee held outside Washington, D.C. “The spelling bee kids are so excited to meet me and it’s totally mutual—I love interacting with them. When I’m back at UVM, someone might say ‘hey, that guy has a Wikipedia page. He’s the spelling bee guy.’ And it spreads through the class and students start asking a few questions.”

Last year Rookwood Pottery was in the national news for having to produce eight trophies for multiple winners of the event. Bailly notes that elite spellers today are better prepared than ever.

“They (they competitors) just weren’t missing any words. The top competitors in bee are getting better and better,” he said.

In honor of Bailly, Scripps issued this citation with the trophy: “Dr. Bailly is more than the voice of the Bee. He is the face, heart and soul of the Bee. We thank him for his years of dedication to the program and the millions of spellers who are inspired by his voice and his encouragement.”

Read More About Bailly and the Bee 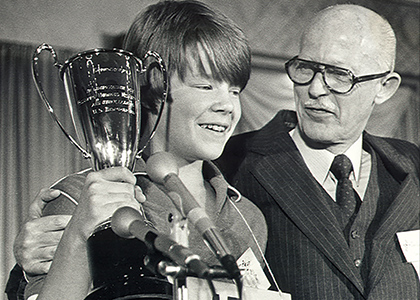