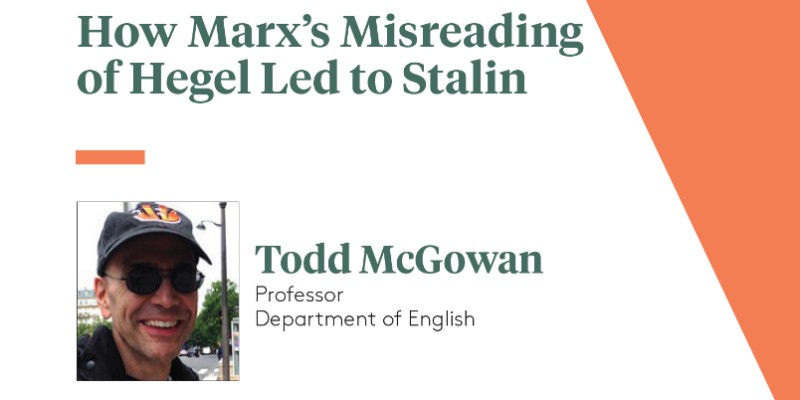 Todd McGowan teaches courses in film theory, history and genre in the UVM English Department. His research interests include the German philosopher Georg Wilhelm Friedrich Hegel, psychoanalysis, existentialism, and the intersection of these lines of thought in the cinema. He earned his M.A. and Ph.D. in English from Ohio State University. McGowan is the author of Only a Joke Can Save Us: A Theory of Comedy; Capitalism and Desire: The Psychic Cost of Free Market; Enjoying What We Don’t Have: The Political Project of Psychoanalysis; and A Contradictory Revolution, a forthcoming examination of Hegel. McGowan’s lecture on February 28 at 4:30 p.m. in Memorial Lounge, Waterman, is titled “How Marx’s Misreading of Hegel Led to Stalin” and is part of The College of Arts and Sciences Full Professor Lecture Series designed to recognize faculty newly promoted to full professor rank.

How did Hegel’s philosophy become a source of interest for you?

I think it was in graduate school when I read The Phenomenology of Spirit. I grew up in Ohio in a very conservative family and went to Earlham, which is a very progressive school. When I took a class on Karl Marx I was captivated by the Communist Manifesto. Of course, Hegel was very influential on Marx’s thought, so I began to explore his philosophy in college. Hegel took a back seat to other things that I was writing, but he’s always been a central figure for me. I decided to learn to speak German about 12 years ago—I felt that was kind of a prerequisite to write the book, which began as a series of lectures on Hegel.

The theme of your lecture indicates that Marx misinterpreted Hegel in some important ways, leading to some pretty bad consequences.

Marx’s idea was that, for Hegel, history ends when we overcome contradiction, all the contradictions we see in society throughout history. But I think that’s a misreading—really Hegel’s point is we’re not so much overcoming contradiction as reconciling ourselves to it. That’s how I draw the line to Stalin–once you think you can overcome contradictions, then any kind of sacrifice for bringing that about becomes justified. A lot of people take “reconciling” to mean “solving” but I think Hegel’s idea is more like “acceptance”—accepting that contradictions can’t be overcome, that we’re always going to have these antagonistic dynamics in society.

There’s also a connection between Hegel and the Film Noir genre, which is another big interest of yours.

I definitely see an intersection between film noir, Hegel, and psychoanalysis. But this semester, I’m actually teaching a class now on Marx and Film Noir. They both show the nice, pretty surface of capitalist society and the really deep, dark underside. The films we’re watching tend to focus on corporate or individual malfeasance; the plots are driven by some kind of desire for money or status that the protagonists don’t have. They find themselves trapped in a capitalist system that seduces them with the promise of an ultimate bliss.