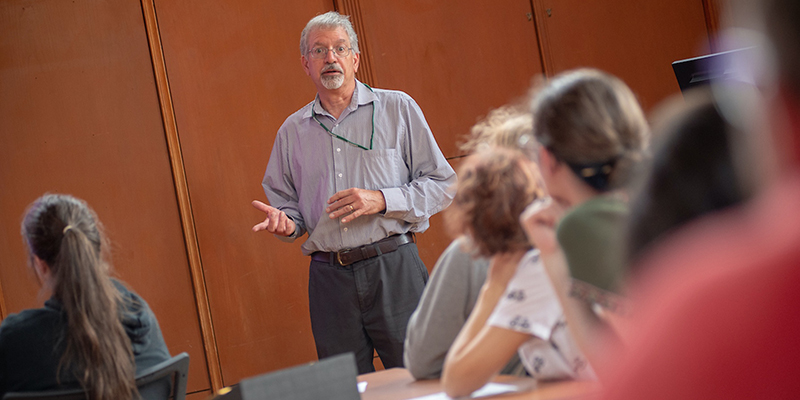 Some of the textbooks in the “History of the Book” seminar can’t be purchased at the UVM bookstore or checked out from the open stacks of the Howe Library.

That’s because the books are original manuscripts transcribed centuries ago, and can only be accessed by visiting the Silver Special Collection in UVM’s newly restored Billings Library.

History major Jonah Goldberg ‘21 has to pinch himself when he realizes a text he researched, Pope Innocent III’s “On the Misery of the Human Condition,” was transcribed 700 years ago.

“We were given guidelines of how to care for the manuscripts,” he said. “But manuscripts have been around for hundreds of years and they’ve been handled by many people.”

Jeff Marshall, library professor and director of UVM Special Collections, explains that wearing latex gloves can reduce the sense of touch which makes accidental damage more likely. “We’ve recently discovered your fingertips aren’t all that greasy. Any moisture you feel is mostly water, so we really emphasize keeping hands clean.”

The books are from UVM’s own Silver Collection in Billings and 21 other manuscripts on loan from Les Enluminures, a company that specializes in collecting, selling and displaying manuscripts from the Middle Ages and the Renaissance.

Marshall sees the seminar as a creative way of collaborating with teaching faculty to bring library materials out of the archives and into the hands of students in a classroom setting.

Charles Briggs, senior lecturer in history, has expertise in the intellectual and cultural history of later Medieval Europe, and he believes Marshall’s perspective adds another dimension to the class.

“Students are learning from Jeff that ‘Oh, there are archives, there are museums and libraries where precious artifacts are kept and preserved and studied.’ For UVM to have this collection and experts to guide them is pretty rare.”

Briggs points out that the main challenge for students is the books are usually written in Latin, a language they don’t know.

“There are many other aspects of the book the students can get to know,” he says. “The question is, ‘how do I approach this as a material object by looking at other evidence that I can analyse?’"

Briggs describes the three-credit seminar for graduate and undergraduate students as a laboratory to sleuth out many other clues the manuscripts leave behind, filling in the picture of how Medieval culture and society developed. He loves the approach in part because the books can be examined through multiple interdisciplinary lenses. UVM Medievalists from five different departments in the College of Arts and Sciences will make guest appearances through the semester to discuss how they use manuscripts in their scholarly research.

“The history of the book brings in history, literature and language, art history, and also the sciences in terms of things like materials analysis and spectral analysis, the tools used to determine the age of manuscripts,” Briggs said.

“Students are able to see that these manuscripts are manufactured things. There is a process that goes into producing books, starting out with the cow in the field which is the source of the parchment, the cover and the binding,” Briggs explains.

One graduate student in the seminar, Sophia Trigg ’14, reviewed a translation of the Roman statesman Marcus Tullius Cicero from the 1400’s. “It was essentially his impression of what a good gentleman citizen should be—kind of a political text drawing on previous opinions of Greek philosophers.”

She discovered that tools like Google translate weren’t often useful in yielding a direct English translation. “There were different conventions used in forming the characters, and often scribes had unique ways of writing them.”

Other clues led to interesting discoveries. The large margins in the books were left for students or later readers to make notes, and the “marginalia” on the pages, written in Italian, leave more clues of how the manuscripts were used.

The parchments were made from the stretched and thinly shaved untanned skins of animals, which speaks to their longevity over the centuries. The course culminates with the print revolution around 1500, which coincided with the availability of paper as a cheaper alternative to parchment.

“Suddenly there’s this tremendous demand for written text,” Briggs said. "It stimulates all sorts of innovation to fulfill that demand, including making artificial writing and building an economic market for books.”

The class coincides with a colloquium presented by UVM Medieval Studies on November 8-9 "Interpreting the Handwritten Book: Medieval Manuscripts at UVM" to be held in the Marsh Room of Billings Library.

The colloquium features presentations by Briggs, Marshall, and UVM Medievalist faculty including Antonello Borra (Italian), Anne Clark (religion), Sean Field (history) and Charles-Louis Morand-Métivier (French). Invited speakers include curators and scholars Ray Clemens of the Beinecke Library at Yale University; Lisa Fagin Davis of the Medieval Academy of America; and Cecilia Gaposchkin and Walter Simons of Dartmouth College. Students in the class will also be presenting papers during the colloquium on the early stages of their research.

The event is made possible through a Lattie F. Coor Collaborative Fellowship from the UVM Humanities Center, with additional support from Silver Special Collections, and the departments of history and German and Russian.

“All of our talks will be based on materials in the Silver Collection, so it really highlights the materials UVM owns, and demonstrates why they are valuable not just for their rarity but for the academic opportunities they offer,” Briggs says.

Kevin Coburn
“The history of the book brings in history, literature and language, art history, and also the sciences in terms of things like materials analysis and spectral analysis, the tools used to determine the age of manuscripts.” - Charles Briggs 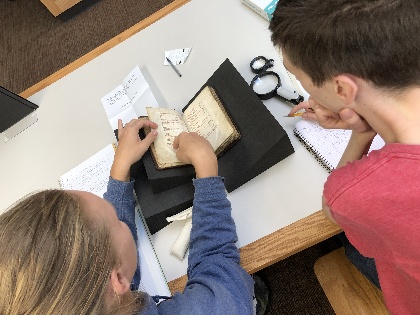 Spencer Margerum '21 and Evan Smith '20 inspecting a manuscript in the UVM Silver Collections. 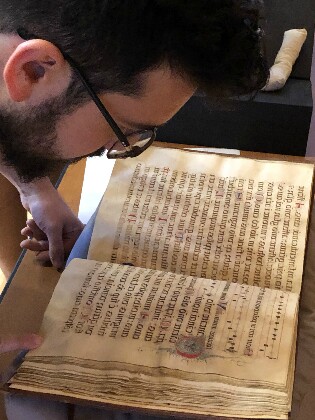 Drew Adamczyk '20 gets a close look at a manuscript in the Billings Library Marsh room.