Taking it to the street in Brooklyn 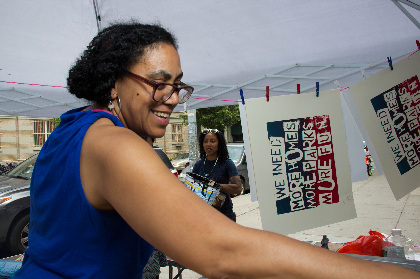 Professor of Art Mildred Beltré teaches at UVM and spends summers in Brooklyn where she and her colleague Oasa DuVerney run a street art initiative called the Brooklyn HI-ART! Machine (BHAM). This fall they take their message to the Brooklyn Museum. (photo: Scott Dolan)

Last May Mildred Beltré, professor of art at UVM, received an email from the Brooklyn Museum. The museum was interested in the work of the Brooklyn HI-ART! Machine (BHAM), a public art project Beltré has run with her friend and collaborator Oasa DuVerney since 2010. Could they meet with the director in the Brooklyn HI-art Machine offices?

“I invited them to meet on the front stoop of our building,” Beltré remembers saying. “It’s the closest thing to an office we had.”

The front stoop, as it turned out, proved to the be the perfect vantage point for museum administrators to see BHAM in action. Their project is situated on a stretch of sidewalk right across the street from Beltré’s building in the Crown Point section of Brooklyn.

The conversation was the first step in planning for the installation “Something to Say: Brooklyn Hi-Art! Machine” at the museum which opened September 13 and will be on display through June 2019.

The origins of BHAM dates back ten years ago when Beltré and DuVerney started making art together in each other’s apartments. They lived in the same building for 20 years and had a lot in common—both were mothers and art educators, and both ran their own studio practices.

“We’d just sit and talk while we did our work, and it really deepened our friendship. The neighborhood we lived in was then, and is now, rapidly gentrifying—we talked about the fact that one of the first things that goes when there’s a lot of gentrification and change is conversation and trust between neighbors.”

They wondered if art could create the same kind of connection they had made. One summer day in 2010 they gathered art supplies, took out a table and tent and occupied a stretch of sidewalk across the street. Neighbors and passerby stopped, curious at first. Soon they began talking and making art.

“The first year we started with print-making workshops,” Beltré explained. “Then we tried to follow up with something different–we’d invite other local artists to do workshops.”

Sometimes the pair offered art services. Beltré owned a sewing machine and took it out to the tent to sew and repair things for neighbors. DuVerney offered drawing services, doing portraits and designs.

A chain link fence bordering the bridge of a nearby subway overpass became a palette for their fabric art projects. Beltré enjoys cross stitching and hit on the idea of creating messages, letter by letter, and weaving them into the fence. Each message was carefully constructed to provoke thought and conversation. Each summer a different message emerged: “Hope Less, Do More.” “Know Your Past.” “See the Unseen.”

The painstaking process of installation also attracted attention. People stopped to ask what they were doing. Often the followup question was “what organization are you from?”

“I felt like that was a real shift,” said Beltré. “People are used to having organizations come into the community to do things and then leave. But we weren’t leaving! We had some great conversations with people as we worked. And we realized we had to be accountable for everything we did because we lived here.”

Over time their activities drew crowds of people of all different ages in the predominantly African American and Caribbean neighborhood--they were discovering a newfound sense of community through making art. Police watched their activity closely.

“What happens in gentrified neighborhoods is that outdoor space is criminalized for some, while being made safer for others,” Beltré explained. “So part of our activity was decriminalizing black and brown bodies on the street and providing spaces that can be creative and generative.”

Last summer Beltré and DuVerney began collaborating with the Brooklyn Museum on the BHAM inspired “Something to Say” exhibition. The installation features a large weaving that reads “Do Not Disappear into Silence” in red all-caps letters which hangs across a balcony over the Museum’s main entrance. Pieces by other Brooklyn artists including Deborah Kass, Kameelah Janan Rasheed, and Hank Willis Thomas occupy other spaces in and around the museum. Coincidentally the installation date, September 13, was an election day in New York.

“We didn’t plan it that way, but it was interesting to see the special resonance it had for people given the current political context,” Beltré said. “I watched people holding up ‘I Voted’ stickers and taking selfies with the banner in the background.”

The installation also happened with the cacophony of the Kavanaugh Supreme Court hearings in the background. The political moment prompted some visitors and passerby to post selfies with messages like “Believe women” and “To my male allies: don’t disappear into silence.”

The exhibition seems to be creating conversations that bridge a wide cultural gap between the museum and Beltré’s neighborhood, which is only three blocks away. And that’s music to Beltré’s ears—she uses printmaking and drawing to explore social change, especially related to the relationships between violence and nonviolent movements.

“A friend sent me picture showing where someone actually rolled a banner over our sign with a message calling for abolition of prisons. I didn’t take it as a critique but as an opportunity to continue the dialogue.”

Kevin Coburn
"People are used to having organizations come into the community to do things and then leave. But we weren't leaving.” -- Mildred Beltré 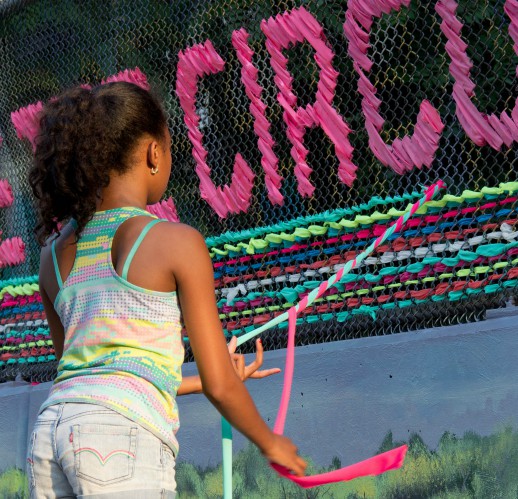 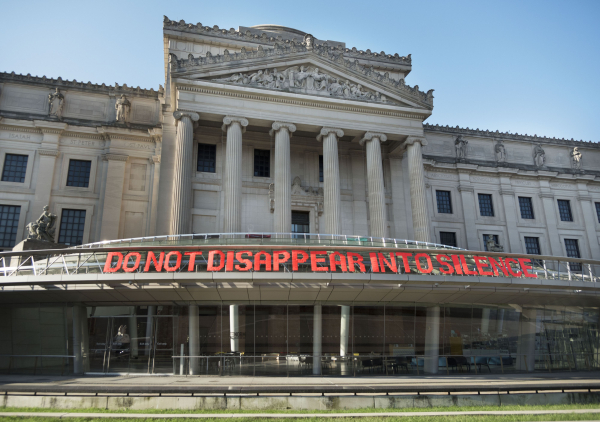