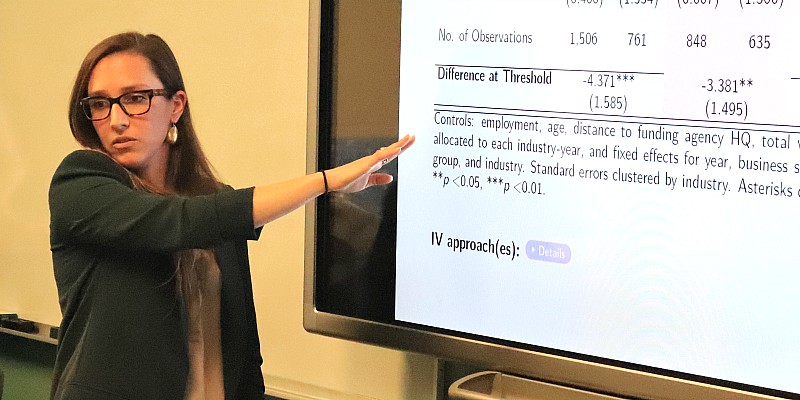 Jacquelyn Pless ’09 is using her UVM liberal arts experience as a platform to find solutions to making clean energy available and affordable as a faculty member at MIT’s Sloan School of Management. “People are amazing—we have managed to innovate over and over again. Every time someone says ‘it’s impossible,’ somebody does it. A lot of the technology is already there.”

On a recent Friday afternoon Jacquelyn Pless ’09 stood in front of the Old Mill economics seminar room and looked out at an audience that included many familiar faces—faculty mentors from her undergraduate days.

This time she was presenting as a faculty peer. She is the Fred Kayne (1960) Career Development Professor of Entrepreneurship and Assistant Professor of Technological Innovation, Entrepreneurship, and Strategic Management at MIT’s Sloan School of Management. Her seminar assessed how the mix of government grants and tax incentives affect research and development investments made by different-sized companies in the United Kingdom.

Pless’ mentors were clearly engrossed, raising their hands and asking questions about her latest research aimed at improving the effectiveness of public spending on research and development investments made by different-sized companies in the United Kingdom.

A native of suburban Philadelphia, Pless arrived at UVM in 2005 as a first-generation college student. Curious and academically engaged, she knew higher education must be part of her future. She cast a wide geographical net, seeking a school that in her words “would embrace unconventional thinking.”

“I felt like UVM was a good fit for a first-generation student—there was a certain amount of economic diversity here, and a really academically rigorous atmosphere.”

Pless declared psychology as her major, thinking she’d go on to medical school and become a therapist for adolescents. In her sophomore year she was admitted to the Honors College and identified new interests including political science—she was especially attracted by the challenge of creating policy solutions for issues important to her, like environmental protection.

“At some point something shifted for me,” she said. “I was less interested in science, which would have been vital for medical school. At the same time I recognized I was a ‘quantitative’ person—I was strong in math, and I saw that economics could help inform policy debates in rigorous, quantifiable ways.”

She ended up combining the perspectives of both disciplines, double majoring in economics and political science. After graduation, Pless served as a legislative assistant in the Pennsylvania House of Representatives and worked as a research economist for the National Renewable Energy Laboratory. She returned to school and earned her M.S. in Ph.D. in mineral and energy economics from the Colorado School of Mines in Golden. Her postdoctoral appointments at Oxford (Oxford Martin Fellow with the Institute for New Economic Thinking), and Harvard (visiting researcher in the Kennedy School of Government), helped broaden her knowledge and shape her research interests.

At MIT’s Sloan School, her work is focused on how to foster innovation in the energy sector in ways that avoid harm to the environment.

“Innovation in the energy space could mean the introduction of an entirely new technology,” Pless says. “It could also be service-based—finding ways to provide energy in smarter ways. It’s also policy. What I’m trying to do is understand what drives innovation that makes energy systems cleaner.”

While the challenge of meeting the global appetite for energy continues to grow rapidly—Pless notes that there are still one billion people on earth with no access to electric power—she’s optimistic that innovation can provide sustainable solutions.

“The economics of renewable energy have evolved so much over the past decade,” she says. “Solar and wind have become economically competitive in many places in the world now, even without factoring in subsidies.”

Pless points to remaining technological barriers that need to be surmounted for the world to reach net-zero carbon emissions, including finding affordable ways to store excess energy generated from renewables. But she sees policymaking as a real game changer.

“Generation of greenhouse gases imposes costs on society—we know emissions hurt our health, hurt our environment. But there aren’t many incentives for energy companies to reduce emissions on their own. Policy reform really should try to adjust that.” 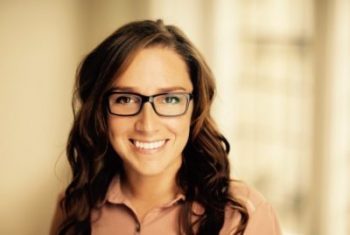