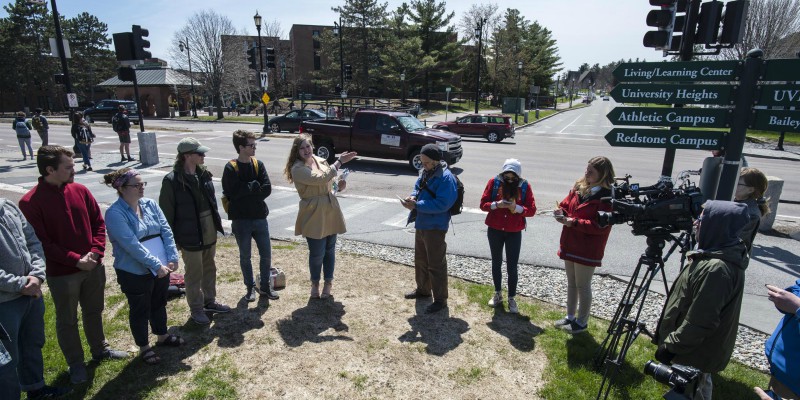 Members of the local media meet with UVM students at the corner of Main Street and University Heights last week. (Photo courtesy of Glenn Russell)

The value of a liberal arts education involves critical thinking, research skills, and effectively communicating findings in a way that compels action.

Students in Richard Watts’ Vermont Political Systems class used all of these tools in tackling a problem hundreds of UVM students, faculty and staff encounter every day—the hazards of crossing four lanes of traffic at the busy Main Street-University Heights intersection.

“I was shocked by the number of cell phones in drivers’ hands as they passed through the pedestrian lined intersection,” Zack Flaherty ‘21, one of the students in the class commented. “Over the course of one hour I counted more than 60 people using cell phones as they headed into the intersection.”

The class is more than a research project though—it is a class in public policy and in understanding how media coverage can influence policy.

“How issues are covered can raise them on the public agenda,” Watts said. “There is no better way to understand that then to be part of it.”

On April 30, a few days after the students completed their data gathering, they called a press conference with the intersection as a backdrop. Reporters from the Burlington Free Press, VT Digger, The Other Paper, WPTZ, Vermont Business Magazine and WCAX were there to take notes. Cameras clicked. TV cameras panned the intersection. Leaders from UVM student government joined them.

“This intersection is clearly unsafe. In my time here at UVM I have seen dozens of people almost hit. The city and UVM cannot wait to take action until something tragic happens. They must act now,” said Jillian Scannell, president of the Student Government Association.

Before the press conference students rehearsed their statements. Watts threw questions at them in a conference room adjacent to the intersection. “What would you like to see happen?” he asked. “Do you have any proposed solutions?” “Have you ever used a cell phone while driving?” The students poured through previous studies on the intersection and examined the range of solutions proposed.

Henry Rood ‘20, a political science and philosophy student, took a series of photographs and a time-lapse photo circulated to reporters at the event. “It has been really interesting to see my photos used to tell this story,” Rood said. “I did not realize they could have such an impact.”

“This clearly has made a difference,” said Owen Doherty ’20, a member of the class who was also recently elected vice-president of the Student Government Association. “I’ve been getting emails from people all over UVM who want to meet and talk with us about this.”

The event has spurred a number of meetings and promises of action, according to Student Government Association leaders. Within a few days of the events, UVM officials and members of the City Council had met with the students. Proposed solutions include increasing time for pedestrians to cross the street, enlarging the curbs so there is more space for waiting pedestrians, and painting a wider crosswalk to send more visual cues to drivers.

Political science major and SGA member Grace Parker '21 said: “The biggest take home that I gained from this experience is how possible it is to make change. You can make actual concrete changes if you really care about them and bring the right attention to them."

View a story on this topic from VTDigger.

Kevin Coburn
“This clearly has made a difference. I’ve been getting emails from people all over UVM who want to meet and talk with us about this.” - Student and SCA Vice-President Owen Doherty '20 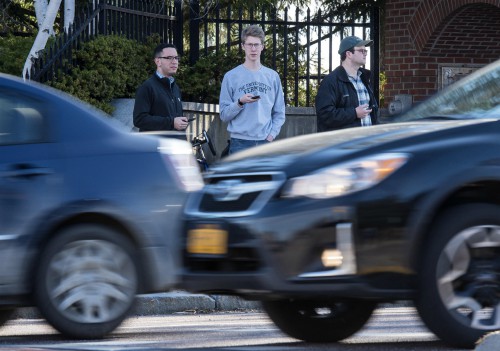 Students in Political Science 123 collect data at the corner of University Heights and Main Street.