Exploring places where the disciplines meet 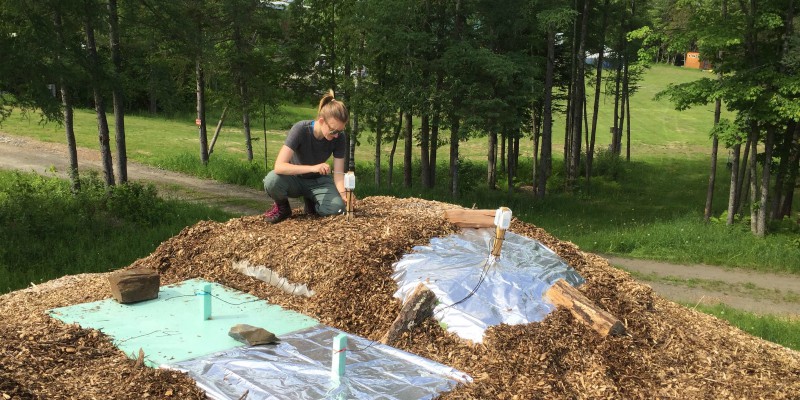 Graduate student Hannah Weiss sets up thermosensors for insulation experiments at the Craftsbury Outdoor Center during the summer.

Hannah Weiss settles into an easy chair in Delehanty 316 on a recent Thursday morning, the weekly meeting time for professor Paul Bierman’s critical writing graduate seminar. Bierman and about a dozen students sit in a circle—someone has brought homemade pumpkin bread and coffee.

The students are in the midst of writing their graduate theses or preparing academic articles for journal publication, and they represent a broad spectrum of disciplines, from traditional “hard-rock” geology, to hydrology, to the social sciences.

They’re all here for the same reason—to learn how to improve their writing. Bierman’s class shows them how to express academic rigor in their papers without abandoning the lay audience.

“Good writing is good writing,” Bierman emphasizes. “We have a duty as scientists to report findings accurately, but we also have a duty to help a wider public understand what we do, and what we’re learning. Otherwise, we’re just talking to ourselves.”

Today it’s Weiss’ turn to receive feedback from her colleagues—they’ve just read her paper about the feasibility of snow storage over the summer months. Her research site is the Craftsbury Nordic Center in Vermont’s Northeast Kingdom, which is eager to find ways of extending the ski season in a low-elevation, low-latitude area.

Weiss is trying to determine the economic and environmental sustainability of building up a “savings account” of snow, allowing for strategic withdrawals in the fall to support events like the Thanksgiving Opener, a tune-up race offered, weather permitting, as the Center’s ski season kickoff. It’s an event that’s directly in the crosshairs of global warming.

One by one, students provide a critique of Weiss’ abstract, the paper’s introduction. Is it stating the research problem clearly? One student suggests that the abstract could contain more detail about methodology.

“I don’t agree,” another student responds. “I think the first paragraph sets up the problem nicely—it explains that we’ve never tested snow storage at such low altitudes and this is what we’re hoping to find.”

“The thing about it,” Weiss muses, “is that the ski season has shortened. The owners are doing this not so much for the science but out of necessity, to stay in business in a sustainable way.”

“Maybe you should say that up front?,” suggests one of her colleagues. As the conversation continues, a consensus emerges that Weiss could frame the problem more clearly by including global warming as a central context for the paper’s research.

“This is what I love about this class,” Bierman says later. “It’s like having a dozen readers for your paper before it gets submitted.”

The process is fruitful. Reviewing his notes, Bierman concludes that all six geology papers or grant proposals reviewed by the class over the past decade have been published or attracted funding.

Besides her student colleagues, Weiss is also drawing on the input of three faculty advisors in three different colleges at UVM: geologist Bierman from the College of Arts and Sciences (Bierman also has a secondary appointment in the Rubenstein School), Yves Dubief, professor of mechanical engineering in the College of Engineering and Mathematical Sciences, and Scott Hamshaw, a postdoctoral fellow at the Gund Institute.

This interdisciplinary approach is important for a project that requires an understanding of the physics of snow, materials science, and ecological economics. The opportunity to weave together different disciplines is exactly the kind of experience Weiss was hoping for when she began her undergraduate studies at UVM in 2014.

“I toured a lot of colleges my junior year in high school including a lot of smaller liberal arts colleges,” Weiss says. “UVM seemed to have more depth and breadth of majors and minors and a huge variety of academic paths.”

Weiss picked environmental science as a major but also developed an interest in geology while minoring in math and taking Spanish courses. She laughs now when reflecting on her worries as a first-year student.

“I’ve always had a problem focusing on one thing—some people call that being ‘easily distracted.’ I was afraid I was going to have to pick something incredibly specific right off the bat. I didn’t really know interdisciplinary studies could exist at a research university.”

Instead of sacrificing one of her interests, Weiss figured out how to combine them. She took a geomorphology course with Bierman and queried him about undergraduate research opportunities. He told her about the Craftsbury project, and she was immediately intrigued. After graduating last spring, Weiss entered the graduate program in natural resources in the Rubenstein School with Bierman as her primary advisor.

Working with Bierman and staff at the Craftsbury Outdoor Center, she assessed the melt rate of two snow piles (each about 200 m3, the size of a small room). Weiss experimented with different materials and methods to nurse the snowpack through the summer, including rigid foam insulation (the insulation sheets used in home construction), open-cell foam (think bed mattress material) and wood chips, both with and without a reflective blanket.

The team’s most successful insulation recipe proved to be a 20-centimeter layer of wet woodchips covered by a reflective space blanket material with a concrete curing blanket underneath. “The wood chips provided significant thermal mass, allowing much of the energy absorbed during the day to be lost as blackbody radiation at night,” her paper reports. The technique effectively kept surface snow temperatures close to zero degrees C.

Weiss and Bierman were pleasantly surprised that the snow piles lasted through mid-September. The science suggests that larger snow piles, created by snow guns and protected by the preferred insulation technique, will have a good chance of surviving intact through summer—and be ready for spreading before next year’s Thanksgiving opening.

At that point, Weiss says, the question becomes one of sustainability.

“Ski centers in Vermont are only allowed to use so much water for snowmaking per season. This is our first year scaling this up and we don’t want to blow all their water allotment. So there are tradeoffs in energy and water use to put into the equation.”

Weiss would like to involve an ecological economist to assess carbon inputs and outputs. Among the many considerations: The Craftsbury Center is a training venue for U.S. Olympic biathletes. If there’s no snow in Vermont, local competitors will need to travel to Canada or western U.S. ski areas to find it, producing more carbon outputs through air travel.

There is little in the way of literature to guide Weiss in her research—some Canadian and European ski resorts have developed successful snow storage practices, but these are either located in high-altitude regions or areas well north of the 45th parallel that delineates Vermont’s northern border. Only one journal article proved useful in providing some practical and theoretical underpinnings to her work. She hopes to publish her findings in the journal The Cryosphere.

She’s also brushing up on her snow measurement techniques. She’ll be attending “snow school” in Montana early next year, an intensive course offered by The Consortium of Universities Allied for Hydrologic Science.

Beyond the scientific challenges, Weiss loves the fact that her research has the potential to make a real world impact. “The Center has a really big commitment to green practices and it has become a real anchor in the community. It’s also important economic driver that brings in outside tourist dollars.”

Having blazed her own academic trail using many different academic perspectives, Weiss sees lots of potential directions for her life and career. She’s been encouraged to pursue a PhD—the science she’s doing could have applications in many different fields. She also loves introducing the outdoors to young people in fun and safe ways, like leading backpacking adventures. And, Bierman’s course has helped instill a passion for communicating science in ways that make research exciting and comprehensible to the broader public.

“I think trying to explain the research also gives you a deeper understand of the science. I see all kinds of directions where I could take that.”

For now, she’s focused on the Craftsbury project which could have big impacts. Rescuing the sport of Nordic skiing in Vermont—or at least making it viable for the short-term?

“That would be pretty cool,” she says.

Kevin.coburn@uvm.edu
“I’ve always had a problem focusing on one thing—some people call that being ‘easily distracted.’ I was afraid I was going to have to pick something incredibly specific--I didn’t really know interdisciplinary studies could exist at a research university.” --Hannah Weiss '18 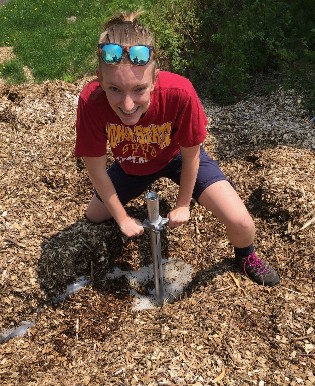