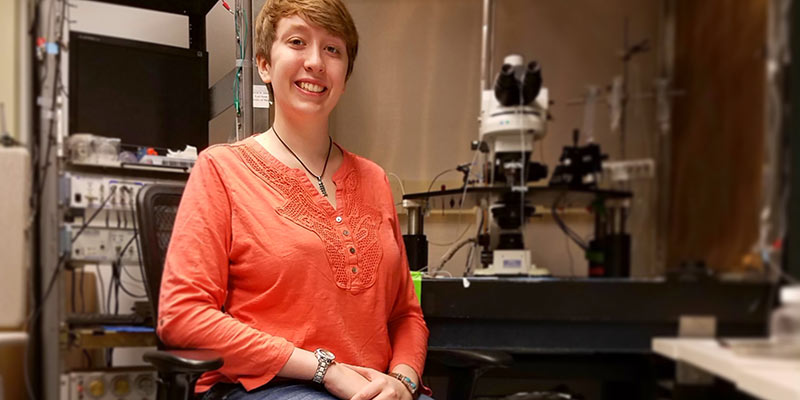 Ellen Wixted ‘16 in front of a “slice electrophysiology rig” in her lab at the University of Michigan Medical School. Wixted is one of two UVM neuroscience alumni to receive a National Science Foundation research grant this spring.

The brain is full of fascinating chambers, lobes and cul de sacs that an ambitious researcher could spend many lifetimes exploring, and Ellen Wixted ‘16 has done her share of poking around. Her academic journey has wound its way from UVM to the Neuroscience Graduate Program at the University of Michigan Medical School. Earlier this spring she received funding from the National Science Foundation to continue her research in neurological disorders. Andrea Pack '11, a neuroscience major at UVM, also received a 2017 NSF Graduate Research Fellowship at the Sober Lab at Emory University in Atlanta.

Wixted still has her sights set on the overarching career goal she set at UVM—to use her research on the neuroscience of learning to reform education. In addition to her degree in neuroscience at UVM, she graduated with a minor in special education.

“Education has been an important part of my life—I mean, I enjoy classes and taking tests. But we don’t really do education very well,” she said. “Even the best trained brain can only focus productively on one thing for 40 minutes at a time, but lectures are much longer than that.”

Especially for people prone to distraction, the traditional classroom can be full of landmines for sophisticated cognitive processing. The cumulative effects of ambient noise, the buzz of fluorescent lighting, and the simple frailty of short-term memory in the wake of a rapid-fire 90-minute lecture can doom many learners to failure.

Wixted puts it quite simply: “The way we teach doesn’t really match the way we learn.”

A native of Homer, a small town in upstate New York, Wixted’s focus at UVM shifted early on from psychology to neuroscience—particularly the physicality of disability in the brain. She found many mentors on her academic journey.

Wixted credits her academic advisor, associate professor of biology Eugene Delay, with helping set up classes that aligned with her academic goals. Her thesis advisor, clinical assistant professor of psychology Alexandra Potter, gave her a priceless experience in research and methodology.

“I was one of two undergrads in her lab and she let us create our own projects and experiments,” she said. “It took a lot of work and time on her end, setting us loose and letting us ask our own questions. Those are things that are expected of you in graduate school—here we have to design our own theses and grant proposals. I feel as though I already got that grounding as an undergrad.”

Her senior honors thesis at UVM focused on cognitive flexibility, or the capacity to change cognition in response to continual shifts in context—a crucial skill for college-level success. Academic problems like low GPAs, decreased motivation and the likelihood of landing on academic probation were generally lumped under the rubric of attentional disorders, like ADHD. Wixted’s research showed clear correlations between lack of cognitive flexibility and poor academic performance.

Her research in the Summer Neuroscience Undergraduate Research Fellowships program (SNURF), which annually gives students the opportunity to do neuroscience research at UVM, led her to the work she’s doing now at University of Michigan Medical School. Her summer project used optogenics (the process of using light to manipulate cells in living tissue) to induce brain oscillations in rats with epilepsy. Dr. Jeremy Barry, of the epilepsy, cognition and development group in the UVM College of Medicine, was Wixsted’s mentor during her SNURF fellowship.

“He taught me about electrophysiology and he is really the reason I am studying epilepsy now,” Wixted says.

“This will be the focus of my work in graduate school,” Wixted said. “I want to understand what specific cells are doing before and during seizures to maybe be able to alter their activity in real-time and decrease seizure frequency.”

Kevin C. Coburn
“I was one of two undergrads in Alexandra Potter's lab, and she let us create our own projects and experiments . . . Those are things that are expected of you in graduate school - here we have to design our own theses and grant proposals. I feel as though I already got that grounding as an undergrad.” - Ellen Wixted ‘16