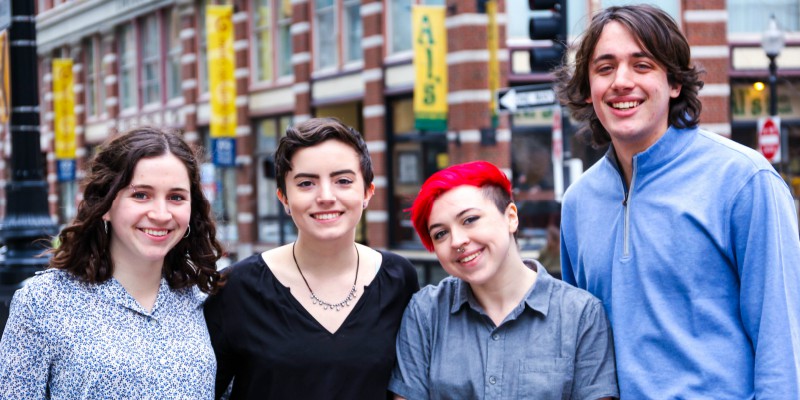 On a cloudy day in May, four UVM students arrived at the top floor of a Boston law office to give their final presentation from their just completed semester long internship – known as the Semester in the City internship program. Surrounded by family, friends, co-workers and staff from the College for Social Innovation—the nonprofit organization that runs Semester in the City—Clemmy Fowle, Kacy Lane, Miles Kligerman and Annie Romano spoke about their experiences interning in Boston for a semester.

Semester in the City is a semester-long internship program located in Boston that gives students the opportunity to intern with social justice and mission-based businesses for five months.

Because Semester in the City is partnered with UVM’s College of Arts & Sciences, UVM students who participate earn 15 credits toward their degrees. The program is open to any major and the internships are diverse and engaging, including placements in the fields of criminal justice reform, education, gender equality, environmental sustainability, government, law, media and more.

Students spend four days per week at their internship, one evening per week in a course entitled “Social Innovator’s Toolbox,” and Fridays in skill-building and reflective workshops that will increase their ability to come up with effective solutions to the world’s problems. Over the course of the semester, students become more independent after living with their peers in apartment-style housing, commuting on the T, and learning how to balance work, class and leisure.

The first four UVM participants in the program came from four different departments, highlighting the  truly interdisciplinary nature of the program.

Clemmy Fowle, a Global Studies major, worked with the Planned Parenthood League of Massachusetts where she organized a retreat for over 150 staff members across the states. Throughout the semester, she expanded her knowledge on reproductive healthcare, discovered to create an equitable workplace, and learned how to advance a mission in the face of powerful opponents. At the end of semester showcase, Fowle spoke about the risk and reward of leaving UVM for an entire semester, “Semester in the City was the social and academic equivalent of throwing myself out of an airplane—exhilarating but terrifying.”

Kacy Lane, a Political Science major, interned with Project Hope where she developed a quarterly donor newsletter, participated in lobbying days advancing the organization’s mission, and contributed to development efforts in preparation for their annual fundraising event. By spending a semester away from UVM, Lane was able to learn about her own capacity for growth. “When I had a fairly comfortable schedule at UVM, I had no reason to question the status quo even if I knew in the back of my mind that something was missing. Getting away from the life that I knew there gave me the opportunity to analyze what was important to me, invest in it, and learn from it,” Lane stated in her end-of-semester reflection.

Miles Kligerman, a Psychological Science major, interned with Boston Scores where he worked on data analysis, posted on social media, created a guide for future social media use, and ran a financial literacy program in an elementary school. At the end of semester showcase, Kligerman spoke about his tendency to place himself and others in boxes and the value in not labelling himself as “just an intern.”

Annie Romano, an English major and graduating senior, worked with 826 Boston tutoring students, supporting classes, and assumed leadership of a literary publication at O’Bryant High School. During her showcase speech, Romano spoke of the sometimes invisible impact teachers have, “just because you’re not seeing your impact, it doesn’t mean you’re not having one.”  This summer, Romano will be moving to Boston to enter the world of education non-profits.

Sophia Trigg
"Just because you’re not seeing your impact, it doesn’t mean you’re not having one.” - Annie Romano