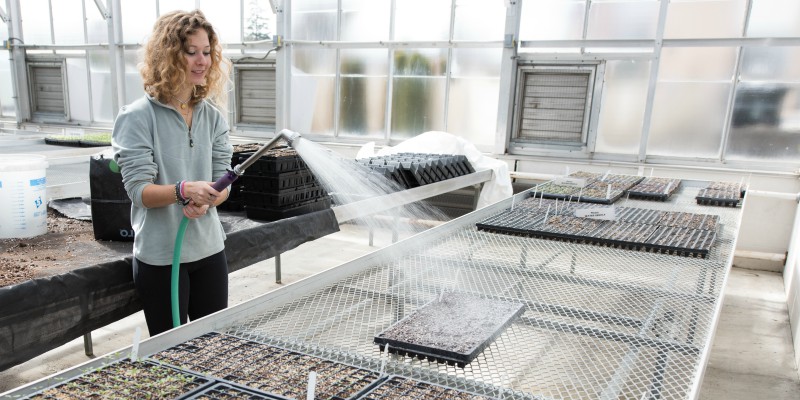 Nell Carpenter ’19 has developed an appetite for locally grown food, though many of the crops she’s raised recently have unfamiliar names and flavors. In her work last summer as an intern for the Huertas Project, a community-based program that provides migrant farmworkers with access to traditional Mexican foods, she’s learned to incorporate a variety of new herbs and vegetables into her diet.

“I didn’t really like pachelo,” says Carpenter, an environmental studies major with a minor in ecological agriculture. “But I loved papalo and romerito.”

Carpenter also participated in a service learning course this semester taught by Rachael Montesano, senior lecturer in the Spanish department. Her “Race, Identity and Migrant Labor” course weaves together Spanish composition and conversation with the historical experience of Mexicans in the U.S. In the local service learning context, these strands intersect at Vermont dairy farms, where workers from Mexico and other Latin American countries are engaged in a daily struggle to provide for their families and find meaningful social connection.

“Service learning goals are tied to course content that addresses questions of sustainability. In this course students are exploring the idea of social sustainability in the interests of building strong and resilient communities,” Montesano said.

The dairy industry is a major component of Vermont’s economy and it has largely shaped the state’s landscape and cultural identity. Perhaps as many as 2000 immigrant workers are now performing the behind-the-scenes heavy lifting in local milking barns. Because they typically lack transportation, access to health care, and live in an environment where their native language is not widely spoken, these workers are virtually invisible to their neighbors. The chill created by the Trump administration's hard line against immigrants in recent months has made it even less likely for farm workers in the state to integrate with local communities.

“The class is looking through the lenses of food security and food sovereignty to create a safe space where these workers can find community and address injustice,” Montesano said. “We notice they are not allowed to become a part of the community because they are kept isolated in fear. Food is one way to bridge that divide.”

Huertas collected seeds of plants traditionally grown in Mexican culture—a special challenge given that seeds of many plants were not widely available locally. in the spring 2017 section of the course, Montesano's students planted the seeds in the UVM greenhouse with the support of the UVM Horticulture Club and Mark Starrett, associate professor in plant and soil science.

“Local farmers will often give up a corner of their cornfield and lend equipment so workers can plant and maintain their own gardens,” explains Carpenter. “So we were trying to build relationships with farmers as well as the migrant workers they employ.”

Given the short growing season in Vermont—the ground is often still partially frozen when the UVM spring semester ends—Carpenter and other interns and volunteers delivered the plants to the farms during the summer. Despite unusually wet weather, Huertas established 28 successful gardens in Addison County and Northeast Kingdom farms.

Carpenter’s ES concentration is in food, land and community, and her work with migrant workers in Vermont was a compelling lesson in how food can build a stronger society. During her farm visits she and other students were often invited by the workers to share in the bounty of the harvest—some of their community meals were the most satisfying she’s ever eaten.

“I grew up on mac and cheese from a box, so food didn’t hold a lot of social significance to me,” she said. “Seeing how much it meant for these people to grow and eat the foods they love made me realize food connects to everything we do. Food can empower you—but if you are cut off from culturally appropriate foods, it can be a very destructive thing.”

Montesano points to a Spanish word—comida—to describe the traditional relationship Mexicans have with food. “It’s not just feasting; it’s a shared meal that builds a sense of togetherness around food. These communal meals and on Vermont farms are a way for migrant families to recapture that.”

Another community partner in Montesano’s course is The Vermont Folklife Center, based in Middlebury. Past projects include a series of comic books illustrated by regional artists designed to help migrant workers adjust more easily to life in Vermont and ease the culture shock of navigating their way in a foreign land. The comic book series El viaje mas caro (The Mostly Costly Journey) was based on actual stories from migrant workers in Addison County that addressed common problems they face. The class did a live reading in Spanish of some of the books during the recent Pulp Culture Comic Festival and Symposium the Vermont Folklife Center held at UVM.

Montesano is offering the “Race, Identity and Migrant Labor” course again in the upcoming spring semester—it is capped at 15 students and has already achieved full enrollment. She thinks the opportunity for students to connect with local communities of Mexicans is an important attraction of the course.

“They learn that diversity is an important component in a healthy society, in the same way that diversity is important in how systems work in nature," she said. "The historical relationship between the United States and Mexico has led inevitably to the institutionalized racism we have towards Mexicans and Mexican Americans in this country. The migrant worker populations right in our backyard makes that real.”

Kevin Coburn
“I grew up on mac and cheese from a box, so food didn’t hold a lot of social significance to me. Seeing how much it meant for these people to grow and eat the foods they love made me realize food connects to everything we do. Food can empower you—but if you are cut off from culturally appropriate foods, it can be a very destructive thing.” - Nell Carpenter ’19 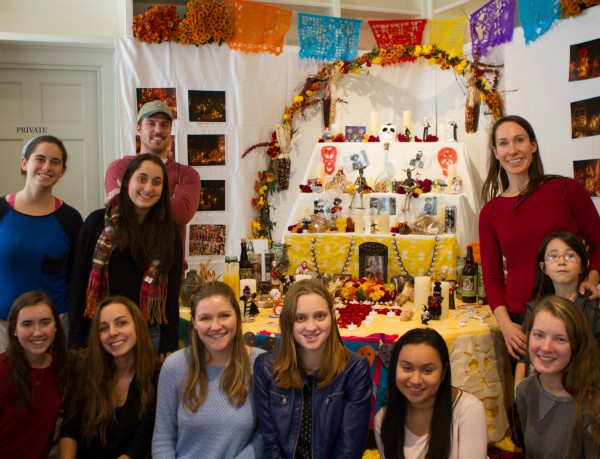 Rachael Montesano (right) with her students in front of an altar the group built for a local Day of the Dead Celebration. 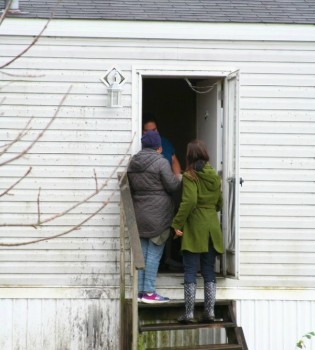 Montesano and her students baked Pan de Muerto, a bread traditionally served on the Day of the Dead, and delivered it to migrant workers in Addison County dairy farms.