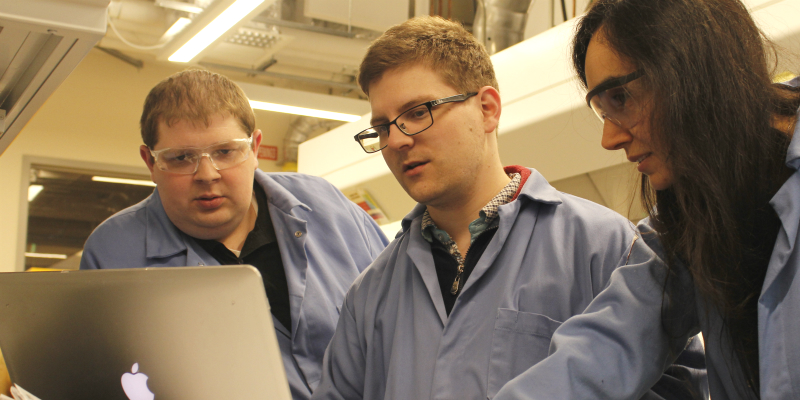 Doing science is a painstaking process of testing and re-testing hypotheses that often leads to dead ends and multiple trips back to the drawing board. But sometimes a completely unexpected result turns up, and when there are skilled eyes to see it, a moment of serendipity makes up for months of uncertainty.

That was the experience for Assistant Professor Severin Schneebeli and his research group in chemistry at UVM, which they describe in a recent paper published in Angewandte Chemie International Edition.

Schneebeli’s lab specializes in finding more efficient ways to build organic molecules with well-defined shapes by combining wet lab experiments with computer modeling. In his most recent work, which is funded by the National Science Foundation, Schneebeli discovered a procedure that not only makes molecule building more efficient but provides environmental breakthroughs as well.

“Traditional chemical synthesis has been all about learning how to create molecular structures in predictable ways,” Schneebeli explains. “We’re looking at ways to scale up the process in an environmentally friendly way, such that less toxic waste is produced during the process.”

To demonstrate, Schneebeli adroitly draws up a computer model of isomers (compounds that share the same formula but have differently arranged atoms) on his laptop, and puts them together in a three-dimensional model. The idea is to produce a structure in an “up-up-up” configuration—which provides a scaffolding of sorts to build molecular cages 100,000 times smaller than a human hair.

The model demonstrates what happens in the lab when solids are heated at a constant temperature of 160° C (320 F°) in a solvent. The heat energy makes it possible for parts of the molecules to rotate, so that different types of isomeric structures can be accessed. Three times out of four, however, the reaction results in an “up-up-down” configuration, which is much less conducive to building useful molecular structures.

Schneebeli was surprised one day when his graduate student Mona Sharafi presented him with data produced when the solid was heated directly at a constant temperature, without using a solvent. In every instance the desired “up-up-up” pattern emerged.

As he describes in the article: “We were merely aiming to reduce the use of high-boiling toxic organic solvents while still expecting an equilibrium product ratio in favor of the ‘up-up-down’ pattern. To our surprise, almost all the solid was converted to the ‘up-up-up’ form upon heating to 160° C for 48 hours.”

It was the rare discovery of a molecule for which a less stable form is created selectively when heated as a solid. The process also eliminates the expensive, time-consuming and toxic step of using solvents in the heating process.

“One aspect of ‘green chemistry’ we’re emphasizing is to remove toxic materials whenever possible. In this case, we were able to completely eliminate it from the equation.”

While the molecular structures built in the Schneebeli lab don’t have a commercial application yet, the fundamental discovery holds promise for many industries. Pharmaceutical companies, for instance, could build on Schneebeli’s methodology in manufacturing new drugs. An additional benefit: the process could be accomplished without use of toxic solvents.

“The fact that we can remove a toxic process and get better selectivity in our synthesis—that’s a great win-win for us and the environment,” Schneebeli says.

Kevin C. Coburn
“One aspect of ‘green chemistry’ we’re emphasizing is to remove toxic materials whenever possible. In this case, we were able to completely eliminate it from the equation.” - Assistant Professor of Chemistry Severin Schneebeli