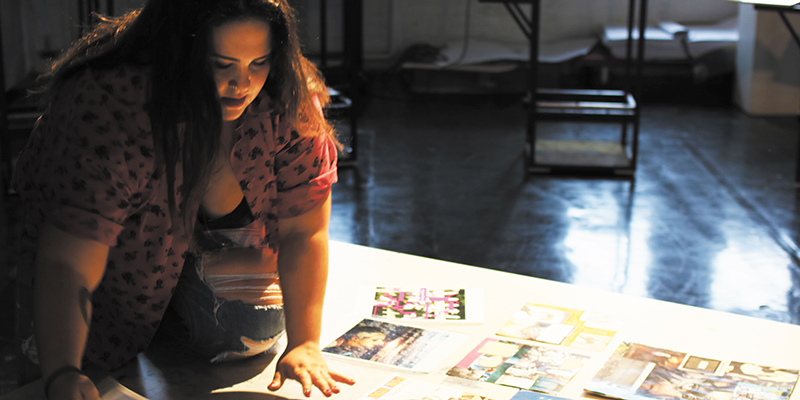 A double major in psychology and studio art, Mack Baker ’19 sees themself combining both interests as an art therapist. At UVM they are busy creating community through art.

Mack Baker is one of those students who loves to get together with friends and toss around ideas for a new art exhibit or a new literary publication. What separates them from many of their peers is their determination to take a good idea and run with it.

“If I notice a problem, or a demand for something, I’ll make it happen,” they said.

Baker’s own creative enthusiasms include the graphic arts, illustration, poetry and jewelry making, and they are interested in plugging themselves in to the UVM and greater Burlington arts community and seeing what lights up. In the process of their four-year career at UVM, Baker has developed vehicles for students to publish their work, speak their truth, or hang their artwork on gallery walls.

Baker grew up in the Worcester, Mass., area. As a member of the high school alpine ski team they took frequent road trips to Sugarbush and other ski havens in Vermont. They wanted a school with a diversity of programs—“it’s important for me to have a good balance between science and art"—and UVM offered a wide range of majors and a captivating environment. What Baker didn’t realize at the time was the liveliness of the Burlington art scene.

“I didn’t imagine it existed when I was a freshman. It just kind of happened for me—it’s kind of subversive. As you build a deeper connection with every project you do, Burlington opens its arms to you.”

Last spring they joined a group of UVM and Champlain College students interested in developing local pop-up art shows in the Burlington area. The group, called Alibi Hour, partners with local businesses, restaurants and bars to open their space to shows up for one big evening.

Over the summer, Baker curated and marketed Alibi Hour Pop Up at RL Photo, an exhibition hosted at the studio of Burlington photographer Rick Levinson. The September 1st exhibition featured the work of over 24 local artists and attracted close to 300 people.

Between organizing the artists, curating the exhibition and promoting the event, Baker got a taste of life as the harried gallery manager. But they describe it as a labor of love.

Baker is taking the local business/art collaborations into new territory. Owners of the Monkey House, a funky new venue in nearby Winooski, offered to display and sell student art. Baker formed a collective of five artists called Alone-together and put together a show.

“It’s not only great exposure for young artists but a way for artists to make money which is an important piece of affirmation for student to have.”

Baker and a few like-minded students identified another need last year—a literary magazine that would provide wider exposure to the work of student poets and artists.

The result was Crossroads Magazine, a monthly printed publication which used seed money from the UVM English department to cover startup costs. Under the leadership of Baker and Alexander Ellis ’18, Crossroads published its first issue in January 2018 and is now a student-run, student-supported venture that distributes copies across campus and at several downtown Burlington locations.

The 20-page magazine accepts poems up to 500 words in length and publishes them with a light editorial touch. One artist and a handful of poets are spotlighted in each issue.

Baker also has their hand in arranging spoken-word events including open-mic poetry nights at The Light Club Lamp Shop on South Winooski Avenue. The business has honest to goodness lamps for sale, but it mostly functions as a full-service bar, restaurant and live performing venue for all ages.

A poet at heart—Baker has been writing since they were in middle school—they look forward to reading on poetry night and drawing inspiration from their peers.

“Mondays are called Lit Club at the Lamp Shop which caters to poetry—people perform and sing sometimes. It’s become very much a home for me since I’ve been at UVM.”

Featured poets at Lit Club are rewarded with evening tips from the venue. Crossroads contributors were featured for one session in September, and plowed tip earnings back into the magazine. Baker and their collaborators are lobbying for more university funding to support the venture.

Baker is gratified by praise that comes their way for creating opportunities, but they claim they receive just as much fulfillment from the creative collaborations as they give. “When I hear people thank me for what I do I feel “ah, that’s nice’ but I don’t really need that. I just feel like saying ‘no, thank you.’”

Kevin Coburn
"As you build a deeper connection with every project you do, Burlington opens its arms to you.”- Mack Baker '19