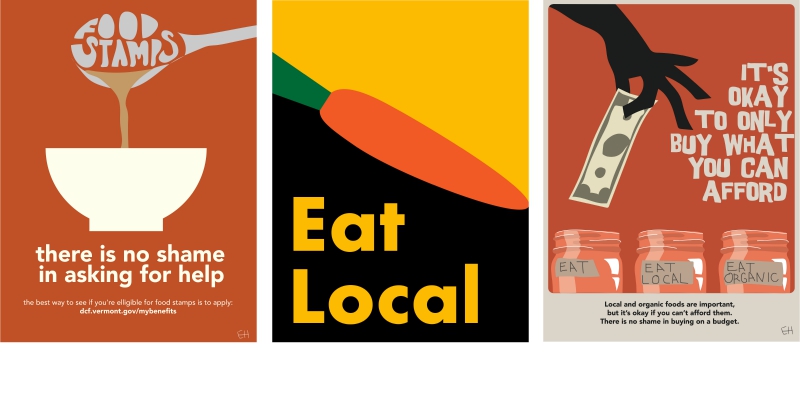 Three of the 14 works created by UVM senior Elle Halpine for the show “Feast and Famine" at the Paul Robeson Gallery opening March 28.

UVM senior studio art major Ella Halpine plans on attending an opening reception March 28 at the Paul Robeson Gallery in Newark N.J., on the Rutgers University campus. But she’s not an ordinary visitor—14 pieces of her work will be on display along with paintings by modern masters including Robert Rauschenberg, John Baldessari, Marilyn Minter and Wayne Thiebaud.

Halpine's work is included in the group show “Feast and Famine,” on display through December 14, 2019. The exhibition explores the social and political dimensions of food, including the relationship of food to global economics and geo-politics, and food as a medium for artistic experimentation.

Halpine grew up outside New Haven, Conn., the daughter of the director of communications at an architecture firm (her father Mig Halpine) and a graphic designer turned French teacher (her mother Calico Harington, a 1985 UVM graduate). She’s been interested in making art for as long as she can remember—she recalls a preschool teacher rewarding her with gumdrops for each piece of art she made.

“The organizers emailed me out of the blue and asked if they could include 14 posters in the show,” Halpine explained. “I had a show last year in Allen House called ‘Seeds’ that featured a lot of my food justice artworks. The organizers came across my work online.”

The subject matter of “Feast and Famine” is particularly close to Halpine. She came to UVM as an environmental studies major with interests in sustainable agriculture and food justice.

“UVM had an amazing reputation for environmental studies, and my mom grew up in Vermont: it just made sense.”

She took an introductory drawing class, then graphic design. After switching to a studio art major, Halpine completed an independent study pursuing the relationship between art and food justice. She continued to make connections between her coursework, her commissions, and a part-time job at City Market, a downtown Burlington grocery store.

“Eating organic and eating local are really important, but the rhetoric can come off as shaming those who can’t afford the pricier options,” she said. “The focus first needs to be on ensuring food accessibility and affordability before we can focus on promoting organic and local food.”

Halpine has transitioned from traditional drawings to digital works that feature bold colors, sometimes embedded with messages like “Choosing between paying for gas and paying for food is hunger” and “It’s okay to buy what you can afford.”

“Having a better idea of how color and composition work, I want to create pieces that really grab people’s attention. If they walk by without really seeing it then that’s a failure.”

Halpine wasn’t planning on attending the opening of the “Feast and Famine” show given the cost of round-trip plane tickets and overnight accommodations.

“When I told my painting professor Steve Budington I wasn’t going he told me ‘this is an amazing opportunity—you can’t miss it. Let me see what I can do.’ That afternoon he told me ‘don’t worry about it—it’s all taken care of.’”

After graduation, Halpine plans to move to Boston to pursue a graphic design career. In the meantime, she’s looking forward to meeting artists she’s long admired from afar.

“I’m hoping just to meet them and learn to how they got to where they are, share any advice they have. I’m mainly excited to see all the artworks and the conversations they’ll hopefully start.”

Kevin Coburn
“Eating organic and eating local are really important, but the rhetoric can come off as shaming those who can’t afford the pricier options. The focus first needs to be on ensuring food accessibility and affordability before we can focus on promoting organic and local food.” -- Ella Halpine '19 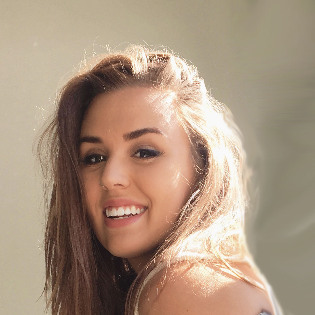