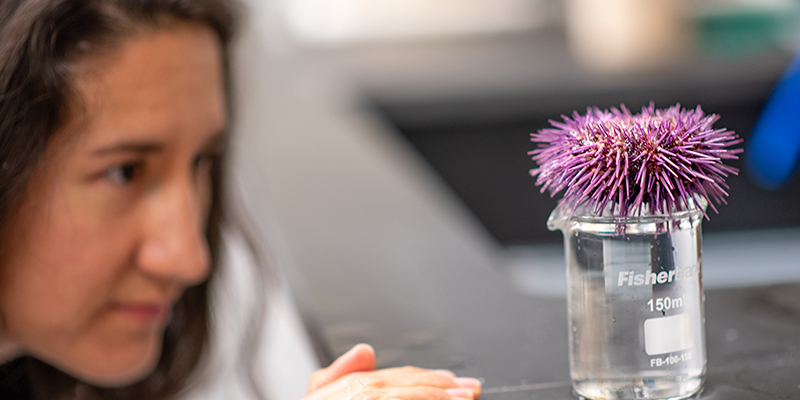 A Noah’s Ark strategy will fail. In the roughest sense, that’s the conclusion of a first-of-its-kind study that illuminates which marine species may have the ability to survive in a world where temperatures are rising and oceans are becoming acidic.

Two-by-two, or even moderately sized, remnants may have little chance to persist on a climate-changed planet. Instead, for many species, “we’ll need large populations,” says Melissa Pespeni, a biologist at the University of Vermont who led the new research examining how hundreds of thousands of sea urchin larvae responded to experiments where their seawater was made either moderately or extremely acidic.

The study was published on June 11, 2019, in the Proceedings of the Royal Society B.

Pespeni and her team were surprised to discover that rare variation in the DNA of a small minority of the urchins were highly useful for survival. These rare genetic variants are “a bit like having one winter coat among fifty lightweight jackets when the weather hits twenty below in Vermont,” Pespeni says. “It’s that coat that lets you survive.” When the water conditions were made extremely acidic, these rare variants increased in frequency in the larvae. These are the genes that let the next generation of urchins alter how various proteins function—like the ones they use to make their hard-but-easily-dissolved shells and manage the acidity in their cells.

But maintaining these rare variants in the population—plus other needed genetic variation that is more common and allows for response to a range of acid levels in the water—requires many individuals.

“The bigger the population, the more rare variation you'll have,” says Reid Brennan, a post-doctoral researcher in Pespeni’s UVM lab and lead author on the new study. “If we reduce population sizes, then we're going to have less fodder for evolution—and less chance to have the rare genetic variation that might be beneficial.”

In other words, some organisms might persist in a climate-changed world because they’re able to change their physiology—think of sweating more; some will be able to migrate, perhaps farther north or upslope. But for many others, their only hope is to evolve—rescued by the potential for change that lies waiting in rare stretches of DNA.

The purple sea urchins the UVM team studied in their Vermont lab are part of natural populations that stretch from Baja, California to Alaska. Found in rocky reefs and kelp forests, these prickly creatures are a favorite snack of sea otters—and a key species in shaping life in the intertidal and subtidal zones. Because of their huge numbers, geographic range, and the varying conditions they live in, the urchins have high “standing genetic variation,” the scientists note. This makes purple urchins likely survivors in the harsh future of an acidified ocean—and good candidates for understanding how marine creatures may adapt to rapidly changing conditions.

It is well understood that rising average global temperatures are a fundamental driver of the imminent extinction faced by a million or more species—as a recent UN biodiversity report notes. But it’s not just rising averages that matter. It may be the hottest—or most acidic—moments that test an organism’s limits and control its survival. And, as the UVM team writes, “the genetic mechanisms that allow rapid adaptation to extreme conditions have been rarely explored.”

Currency in the current sea

The new study used an innovative “single-generation selection” experiment that began with twenty-five wild-caught adult urchins. Each female produced about 200,000 eggs from which the scientists were able to extract DNA out of pools of about 20,000 surviving larvae that were living in differing water conditions. This very large number of individuals gave the scientists a clear view that purple urchins possess a genetic heritage that lets them adapt to extremely acidic ocean water. “This species of sea urchin is going to be okay in the short term. They can respond to these low pH conditions and have the needed genetic variation to evolve,” says UVM’s Reid Brennan. “So long as we do our part to protect their habitats and keep their populations large.”

But coming through the ferocious challenge of rapid climate change may come at a high cost. “It's hopeful that evolution happens—and it’s surprising and exciting that these rare variants play such a powerful role,” says Melissa Pespeni, an assistant professor in UVM’s biology department and expert on ocean ecosystems. “This discovery has important implications for long-term species persistence. These rare variants are a kind of currency that urchins have to spend,” she says. “But they can only spend it once.”

Study in the Proc. of the Royal Society
Pespeni Lab
UVM Biology Dept.