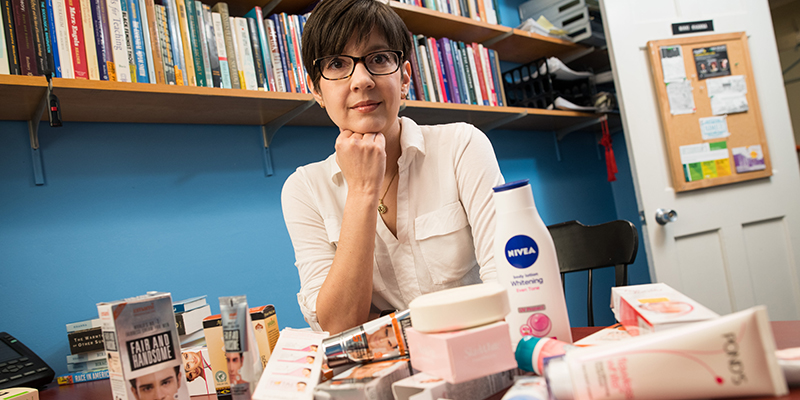 The seeds for Nikki Khanna’s new book, Whiter: Asian American Women on Skin Color and Colorism (NYU Press, March 2020), were planted when the UVM Sociology professor was a child growing up in suburban Atlanta.

On Saturday mornings Khanna, the daughter of an Indian father and white mother, would often shop with her parents at the local Indian grocer. At her eye level were boxes upon boxes of whitening creams with light-skinned Indian models promising “total fairness” and “complete whitening.”

“Whitening creams were everywhere and still are, and I was deeply affected by them,” she says.

Khanna’s early scholarship focused on mixed race identity, particularly among black-white biracial Americans, but she always knew she wanted to return to the topic of colorism within her own community, in part because of her childhood memories but also because the subject was so little explored.

Though colorism—defined as prejudice or discrimination against individuals with a darker skin tone, typically among people of the same ethnic or racial group—affects just about every part of the non-white world, Khanna says, most research, including her own, has focused on African Americans and Latinos, with very few studies on Asian Americans.

The issue has stayed under the radar, Khanna says, because “Asian Americans, and Asians generally, are hesitant to talk about it.”

Khanna knew she wanted to bring this well-kept secret out into the open by giving a voice to Asian Americans who had been affected by colorism, but how she would do it was unclear, especially since she hoped for representation from many different Asian ethnic groups.

“I decided I would put out a call that I was working on a book and that I was really interested in hearing personal stories—particularly from women, since they tend to be the most affected by colorism,” she says. She posted to relevant Facebook groups, promoted the book among her colleagues, many of whom also posted to their networks, and used word of mouth to reach people who might not have seen the queries.

She had no idea what to expect. But then the essays started pouring in.

“I was so excited because as I was reading the essays, I felt a connection with the women,” she says. “I also realized these women have so many things in common with each other, and there aren't a lot of spaces where you see their stories,” she says.

She picked the strongest 30 essays, with an eye to diversity. Some essayists are academics, most are not, and they range in age from 22 to 62. They or their families come from many different Asian countries, from Pakistan to Cambodia to Japan to Vietnam. Some of the women included in the book are also mixed-race, like Khanna, adding another dimension to the issue of skin color among Asian Americans.

The essays naturally grouped themselves into six themes, Khanna found, from those that examined the often unwanted privilege light skin confers, to writings on “aspirational whiteness,” to essays that focused on the anti-black attitudes common in many Asian American communities.

Khanna contributed an introductory essay and prefaced each of the book’s six sections.

All of the essays are poignant expressions of personal experiences, and many are full of hurt, recalling words Khanna heard as a child about dark-skinned Indian women: “It’s a shame. She’s going to have a hard time getting married. No one is going to want to marry her.”

In an essay from the book titled Too Dark, Miho Iwata writes, “When I was a little girl, my dark complexion was somewhat acceptable. However, having dark skin as a woman in Japan is seen as very problematic. My mom would make comments such as ‘You are already old, so you should take care of your skin’; ‘Tanning will give you more ‘aging spots’ and your face already looks dirty with shimi [a Japanese term for dark spots/freckles but it literally means ‘stains’].’ My peers would also make comments about my dark skin, and some of them tried very hard to convince me to stay out of the sun and to make sure to wear sunscreen all the time.”

What is the allure of whiteness?

“Sometimes it’s not about Caucasian-ness,” she says. “In many parts of Asia, light skin is associated with upward mobility and higher classes. The notion is that, if you have light skin, you must be wealthy or you're successful. Darker skinned people are seen as the people work the fields.”

For others however, particularly those from post-colonial countries, whiteness is often revered. In those contexts, Khanna says, “Skin whitening cannot be completely separated from the elevated status given to white people.”

Khanna’s goals for the book go beyond the academic.

“I want to contribute academically with this research since this topic is rarely explored,” she says. “But even more, my hope is that the book sparks conversation about skin color. I don't think this is something Asians and Asian Americans often talk openly about. I also hope that many women read the book and see themselves in it. They aren’t alone.”