Want to Work in Advertising? Try Majoring in Religion 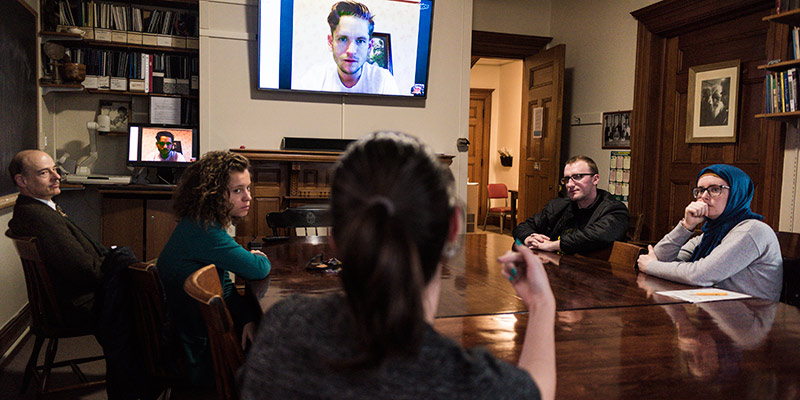 What can you do with a major in religion? Alumnus Matt McLaughlin '08 Skypes in to a career exploration session to share how study of the field has helped him find success in the advertising world. (Photo: Ian Thomas Jansen-Lonnquist)

“We all have interests and passions for a reason. It's your inner voice telling you what you should be doing with your life.”

That’s GoPro chief Nick Woodman in a video created by Reddit, one in a series of interviews with tech CEOs that the social media company recently featured on its site. But it might as well have been Matt McLaughlin, a class of ’08 religion major, who conceived of the series "out of thin air," brought the concept to Reddit and sold Google Cloud on sponsoring the spots, which netted the company its highest advertising revenues ever.

Earlier this semester, McLaughlin had Woodman-esque advice for a group of religion majors, delivered via Skype from a monitor hovering over a seminar room, in a career exploration session organized by the Religion Department:  If studying religion is your passion, as it was for him, he said, ignore advice to major in something more “practical.” The way of thinking the religion curriculum inspires  -- “understanding the why of human behavior and how humans make meaning of the world” -- is the perfect preparation for the fluid, ever-evolving world of work in the 21st century.

If that sounds overstated, McLaughlin’s career is a case in point that it’s not. Courses like "Studies in Hindu Traditions" have had a far-reaching impact on the worldview, and workview, of the Fairfax, Virginia, native and helped him achieve spectacular success in his brief career.

After UVM, McLaughlin was interested in exploring a branch of marketing called branding -- the art and science of imbuing a product or service with a set of values that customers respond to.

So he headed to a place where he thought he could "learn and grow": New York. After knocking around as a production assistant and production coordinator on ad agency television commercial shoots, lugging equipment and running down talent, he and a director friend formed a company called Macula -- and promptly caught a break. With the help of his partner's film school buddies, the two produced a commercial for Dockers that aired during the Super Bowl pre-game and NBA Finals in 2010.

Unaccountably, the spot didn’t lead to much more work, so McLaughlin went back to being a production coordinator in New York but with an ambitious new goal: to teach himself to be an executive producer, the principal figure who makes a film or video project go.

To do that, he channeled his training as a religion major, examining New York’s advertising scene as a system of values he needed to analyze and understand -- no different than studying Hinduism or Buddhism.

That meant talking with everyone in sight, no matter what their role or rank, asking question after question.

On a freelance job, he ran into a kindred spirit, Andrew Simkiss and, in partnership with his new friend, invoked another hallmark trait of a religion major: critical thinking.

“What I was seeing was a lot of money being spent on video commercials that weren't effective” in the age of the internet, when viewers could easily click away from them, he says. “I wanted to be a part of coming up with the ideas and strategies” for whatever came next.

As McLaughlin and Simkiss talked, two things became clear: since the web was their medium, they weren’t constrained by the time limits of the traditional 15- or 30-second TV spot; they could produce four- or 20-minute short films promoting a product, service or idea that would air on YouTube or Vimeo.  And they needed to make their messages compelling and engaging enough that viewers would be pulled in and want to watch.

A lot of hustling and good luck brought their new company, Acres, the opportunity to do just that.

Through a casual connection, McLaughlin was introduced to Bill Hyres, the campaign manager for a little known local politician named Bill de Blasio. Hyres was impressed with McLaughlin, took a chance on Acres and the company was suddently in the thick of a competitive mayoral race.

The de Blasio spot, and an introduction from Hyres, got Acres a contract to produce Airbnb's first major advertising campaign and later led to the creation of a powerful four-minute video for the Bernie Sanders campaign that was covered by the New York Times.

What McLauglin was learning through his success was that his most effective tool as a communicator was his humanity, another lesson distilled from his study of religion.

“In my mind, if you are trying to entice a massive amount of people, you need to tell a story that appeals first and foremost to a human being,” he says.

The Reddit work also came during this period and allowed McLaughlin to put another of his insights to work: the best communications don’t force feed a message to an audience; they invite participation, a strategy much facilitated by Reddit's culture of down- and up-voting, which allowed members of an entrepreneur-focused sub-Reddit community to vote on the tech CEOs they wanted profiled. The approach was applauded in the Advertising Age.

McLaughlin’s success is due to his talent and drive, says Religion Department chair Kevin Trainor, who organized McLaughlin’s UVM Skype session, but his training as a religion major also played a role.

Studying religion, and the humanities generally, is about “opening people to points of view, ways of seeing the world, that are fundamentally more complex, and that is important preparation for the kind of complexity that people face in the job market,” he says. “What Matt was talking about in class is that religion courses teach you about the processes of making meaning. And making meaning is fundamental to how people make their way through the world.”

Survey: 96 pecent of religion alumni are employed, work in variety of fields
Department of Religion
Watch the Nick Woodman 'Formative' interview. Matt McLaughlin '08 conceived of the series, which has netted Reddit its highest advertising revenues ever.