The Wall in Focus

A student’s idea, a camera and a week on the southern border come together in a photo essay worth several thousand words 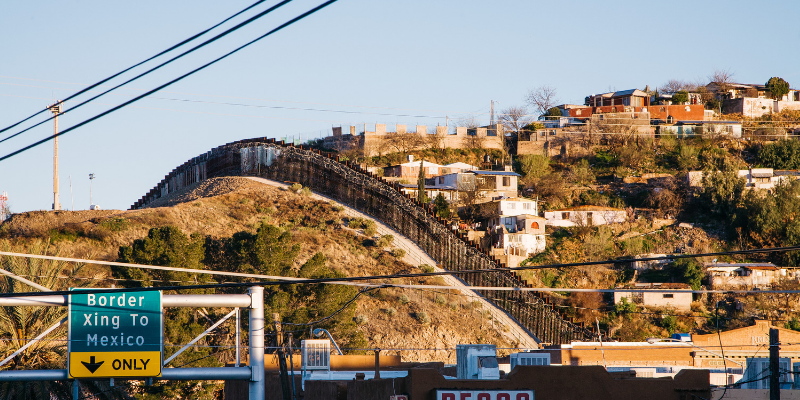 The twin cities of Nogales—one located north of the United States-Mexico border in Arizona, the other south of the border in Sonora, Mexico—are just three miles apart, but between them stands a 20-foot wall and more than 100 years of border history. Following a deadly dispute in 1918, the U.S. constructed its first permanent physical barrier along the southern border in Nogales, Arizona. But what was initially a six-foot fence to manage traffic has evolved into a wall made of steel and razor wire, reinforced by agents and electronic surveillance, and has grown more than three times its original height. 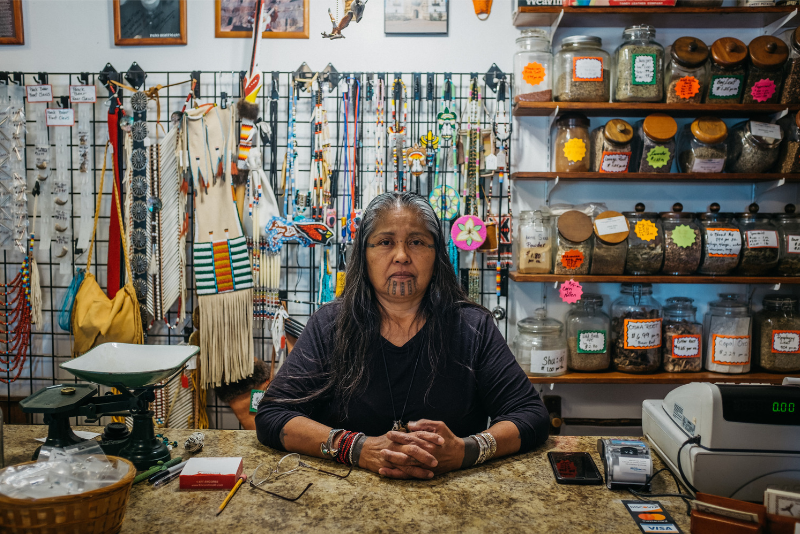 Thomasa, a Tohono O’odham tribe member, has lived with the border conflict her entire life. She is currently building a house on Tohono O’odham land near Nogales, Arizona, and is frequently visited by border patrol agents. She owns and operates a gift shop in Tucson, Arizona. (Tucson, Arizona)

“The scale of the wall really blew me away and I was surprised by how militarized the American side is. They have border patrol agents driving around constantly, and I felt like I stuck out like a sore thumb because I was this kid walking around with a big camera, taking photos of stuff,” Patrick Langlois says.

For many, spring break in Mexico typically involves beachside resorts, rest and relaxation and adventures atop Mayan ruins. But for Langlois, an environmental studies and studio art grad, his final spring break at UVM was spent bustling around behind a camera lens, capturing striking images for a photo essay about the realities and complexities of heightened security on the United States-Mexico border.

“Recently all we hear about are the specific reasons why our current administration is interested in increasing border security, but border towns are left out of the conversation. I just wanted to tell that story and I think photography was the best way to do that,” Langlois says. 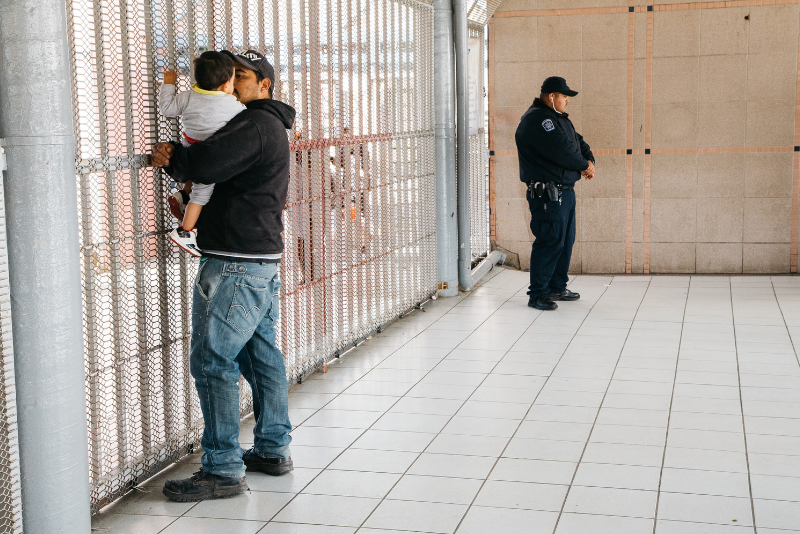 At the encouragement of his advanced photography professor Thomas Brennan, Langlois decided to take on a four-credit independent study during his final semester at UVM to hone his photojournalism and visual storytelling skills. As he researched visually compelling topics to focus his study on, Langlois simultaneously planned a spring break trip to Tucson, Arizona, to visit his sister. That’s when he discovered Nogales, less than an hour away from where he’d be.

Every day for a week, Langlois packed his camera; drove south from Tucson to the border in Nogales, Arizona; parked the car; and walked across the border to Nogales, Sonora. In all, he estimates it took about five minutes to enter Mexico, however, it took up to two and a half hours to return to the U.S. with heightened security. In between his comings and goings, he explored the two border towns for hours, talked with citizens on both sides of the wall and took honest photos of the twin cities and the people who call them home.

Langlois met a Native American woman in Arizona whose family no longer makes an annual visit to her father’s gravestone in Sonora to perform a sacred ceremony, because increased security has made it too difficult. He met a man in Sonora who has not seen his children in Phoenix, Arizona, for quite some time because he believes it’s too risky and dangerous for him to enter the U.S., even for a visit. Langlois also learned about the complicated politics surrounding pollution in the Santa Cruz River, which flows back and forth between the two nations and disregards any border wall or law.

“I was constantly thinking that I needed to make photos that were respectful. I didn't want to be exploitative at all when I was there, I just wanted to cover the story and not impose, or try to act like I was making a tangible difference, which I don't think I was,” Langlois says. 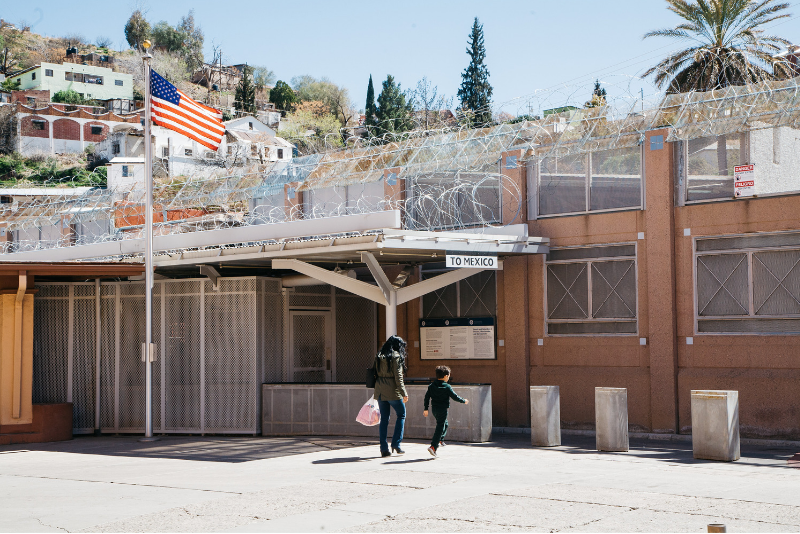 A mother and her son approach the Mexican Customs office, where there is little to no security when entering into Sonora. In the early mornings and late afternoons, hundreds of students cross the border from Sonora into Arizona to attend school. Conversely, many parents in Arizona send their children to school in Sonora to learn Spanish. (Nogales, Arizona)

He admits that while the language barrier was a bit of a challenge, he was able to use his five years of Spanish studies to communicate with residents, who illuminated just how reliant the two Nogales are on each other. Langlois collected stories from local shop owners, townspeople and those waiting in line to cross the border. He shot striking portraits of those he met and candid photos of day-to-day life in the twin cities: cars lined for miles along the southern border, food vendors stationed at the border and, of course, the wall itself, which has increasingly disrupted life in both Nogales.

In all, he pared down hundreds of photos he shot that week and curated a selection of just 14 honest photos and portraits that tell the story of his time bouncing back and forth beyond the border. Langlois displayed his photo essay in Williams Hall, home of the UVM Art Department, for the University of Vermont community to share his experience.

“I think the main takeaway from my project is that the two cities, Nogales, are so dependent on one another for work, shopping, and just living. Increasing border security makes it so much harder for them to coexist, and that's impacting the local economy on both sides,” he says. “Border cities are really underrepresented in the current conversation about border security, but it's an issue that people in Vermont don't have to think about. I think having a visual narrative of what life is like in these cities helps people empathize with those who live in Nogales and the issues they're faced with.” 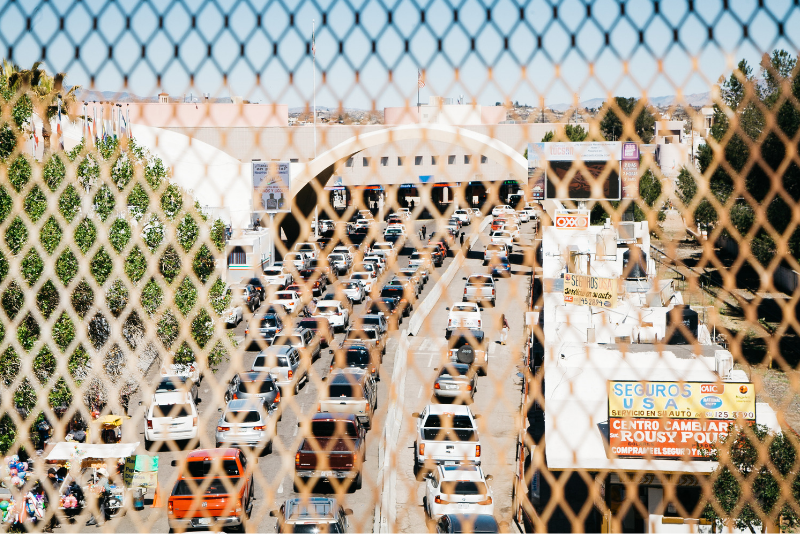 A view from Nogales, Sonora, of traffic waiting to go through United States Customs. On a busy day, the line of cars can stretch for miles. (Nogales, Sonora)