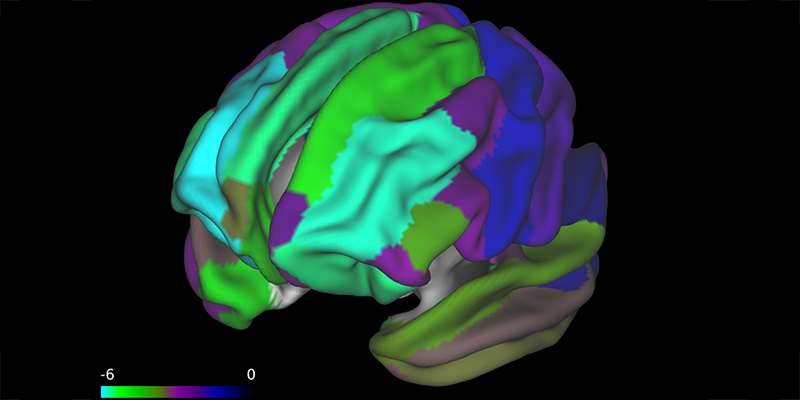 A composite bran scan shows that, while all of the cerebral cortex showed thinning among obese and overweight children in the study, thinning was greatest in the prefrontal cortex, the cyan color. The finding is significant because memory, the ability to plan and other aspects of executive function are controlled by the prefrontal cortex. Other colors represent lesser degrees of thinning of the cortex among study participants. (Photo: courtesy Yale University) caption

Published studies have long found a correlation between obesity in children and decreased executive function. New research published in JAMA Pediatrics, based on data mined from a massive national research study, suggests that a change in brain structure – a thinner prefrontal cortex – may help explain that interrelationship.

“Our results show an important connection; that kids with higher BMI tend to have a thinner cerebral cortex, especially in the prefrontal area,” said Jennifer Laurent, an associate professor in the Department of Nursing at the University of Vermont and lead author of the study.

The findings are based on data retrieved from a National Institutes of Health-funded research project, the Adolescent Brain Cognitive Development study, or ABCD, which is following 10,000 teens over a 10 year period. Each year to two years, study subjects are interviewed, take a battery of tests, give blood samples and undergo brain scans.

The robust study confirmed the findings of its predecessors; that subjects with higher BMI tended to have lower working memory, as measured by a list sorting test.

But it added a important component to that insight – a physiological correlate in the brain that might help explain the connection.

“Our hypothesis going into the study was that the thickness of the cerebral cortex would ‘mediate’ – or serve as an explanatory link for – the relationship between BMI and executive function,” Laurent said.

The findings did confirm the relationship, according to the study’s senior author, Scott Mackey, an assistant professor of Psychiatry in the University of Vermont’s Larner College of Medicine.

“We found thinning along the entire cerebral cortex” among research subjects with higher BMI, Mackey said, but especially so in the prefontal area.

"That’s significant because we know that executive function, things like memory and the ability to plan, are controlled in that area of the brain,” he said.

More research is needed to determine the nature of the link between the three variables.

“It could be that a thinner prefrontal cortex is affecting decision-making in some children, and they make unhealthy dietary choices as a result, which could lead to obesity,” Laurent said.

Or the causal relationship could work in the opposite direction.

“We know from rodent models and adult studies that obesity can induce low grade inflammatory effects, which actually do alter cellular structure” and can lead to cardiovascular disease, Laurent said.

“With prolonged exposure to obesity, it is possible that children have chronic inflammation, and that may actually be affecting their brain in the long term,” she said.

If that were the case, there would be significant public health implications, Laurent said. “We would want to proactively encourage changes in kids’ diets and exercise levels at a young age with the understanding that it’s not only the heart that is being affected by obesity, it is perhaps also the brain.”

The decrease is working memory was a statistical observation, Laurent said, not a clinical one. “We did not look at behavior. It’s very important that this work not further stigmatize people who are obese or overweight,” she said. “What we’re saying is that, according to our measures, we are seeing something that bears watching. How and if it translates to behavior is for future research to determine.”