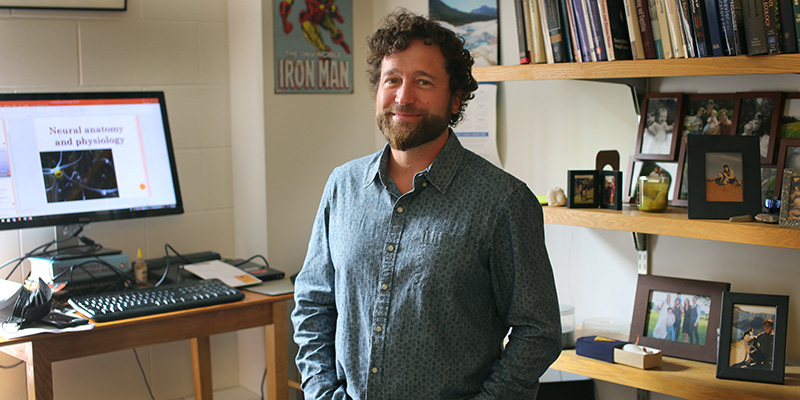 St. Michael's College Psychology professor Ari Kirshenbaum leveraged a seed grant he received from UVM to secure his own grant from the National Institutes of Health to study the abuse potential of E-cigarettes in young adults. UVM just received a $19.4 million grant to continue the funding program — designed to foster a biomedical research infrastructure in Vermont — that Kirshenbaum utilized. (Photo: St. Michael's College)

The University of Vermont has received a $19.4 million, five-year award from the National Institutes of Health to foster biomedical research expertise among faculty at Vermont’s four-year colleges and attract students at those schools and at UVM to careers in the biomedical sciences.

The new grant is the fourth consecutive multi-year award UVM has received from NIH to fund the initiative, formerly called the Vermont Genetics Network.  In June 2020, the UVM initiative was renamed Vermont Biomedical Research Network to reflect the broader field of research supported by the award. The program, which launched in 2002, is part of the IDeA Network of Biomedical Research Excellence (INBRE) program at NIH, which funds similar programs in other states.

In addition to promoting workforce development, an aim of VBRN during the new award period is to develop and sustain statewide groups of scientists from colleges in the state, UVM and state government around a common research theme — the ecology of diseases like Lyme’s disease, for instance — that can promote the health of Vermonters.

“Strengthening biomedical research and education at the college level throughout Vermont and helping grow the state’s STEM workforce are very much part of UVM’s 21st century land-grant mission,” said Suresh Garimella, UVM president. “VBRN enable us to use our nationally recognized strength in biomedical research to help make Vermont healthier and more economically vibrant, key elements of our strategic vision, Amplifying Our Impact. We are very grateful to Senator Leahy for ensuring that this important work can continue.”

“I’m proud and delighted that the National Institutes of Health once again selected the University of Vermont’s Vermont Biomedical Research Network for funding,” said Senator Patrick Leahy (D-Vt.), vice chair of the Senate Appropriations Committee. “This multi-year investment through the IDeA Network of Biomedical Research Excellence (INBRE) program will ensure that students and faculty at colleges across the state will have access to research supports and dollars to work on some of Vermont’s most prescient and persistent biomedical challenges.  On the Appropriations Committee I have advocated for INBRE funding because I believe that Vermont’s colleges have what it takes to be national leaders in biomedical research, but also because I know that the research conducted on critical health issues, like Lyme Disease, will touch the lives of Vermonters across our state.”

A key component of the program is providing seed funding to faculty at schools in the network, which are primarily teaching colleges, that will allow them to develop their own research agendas and secure independent funding to advance them. Faculty apply for the seed grants through UVM.

The program has been successful in meeting that objective, said Rex Forehand, Ansbacher Professor of Psychological Science at UVM and director of the Vermont Biomedical Research Network.  “A significant number of faculty have used the seed funding to develop rigorous research programs and subsequently received external funding to support them,” he said.

The  Vermont Biomedical Research Network also supports paid internships for students at Vermont colleges to work in the labs of faculty in their home schools or at the Colchester campus of the Albany College of Pharmacy, the White River Junction VA Medical Center or Delaware State University, an historically black university with whom UVM has a partnership agreement. It also supports internships for out-of-state students in the research labs of UVM faculty.

The goal of both internship programs it to build Vermont’s STEM workforce, said Tabitha Finch, director of VBRN’s professional development and education core.

"We're creating a pipeline for these students, including those from out-of-state, to continue in the biomedical field,” she said. “Many of them elect to stay and work in the state of Vermont after they graduate.”

Forehand is optimistic that the program will continue to meet its goals, based on its past successes: