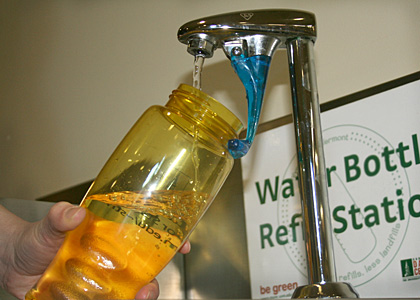 By the end of the year, 75 drinking fountains across campus will include water bottle refill stations like this one in the Davis Center.

The University of Vermont will become one of the first institutions nationwide to end the sale of bottled water on campus and mandate that one-third of drinks offered in vending machines be healthy options. The decision marks the advent of a long-awaited systematic sustainable beverage policy after years of lobbying by students and the greater campus community.

The announcement comes five months prior to the end of a ten-year contract with Coca-Cola of Northern New England that allowed the company to provide 100 percent of beverages in vending machines and 80 percent of bottled beverages served in retail, residential dining, and catering, totaling more than 1.1 million bottles per year.

As of July 1, the university will no longer have a beverage contract with corporate sponsorship and exclusive "pouring rights." Sodexo, operator of University Dining Services, the UVM Bookstore and the CAT Pause store will choose a mix of beverages through their own national contracts and local connections, allowing for greater flexibility in addressing environmental and social values in relation to the beverages supplied on campus.

“This change has been student-driven,” says Gioia Thompson, director of the Office of Sustainability. “Students advocating for an end to sales of bottled water have dedicated many hours over the past four years encouraging fellow students to change their habits and persuading administrators to foster a more sustainable beverage system for the community."

The sale of bottled water (flat, unflavored water) in UVM’s 57 vending machines and in retail outlets will end in January of 2013, allowing time for the university to retrofit drinking fountains across campus, and for Dining Services and the stores to make adjustments.  Drinking fountains will be converted to bottle filling stations like those in the Davis Center with a goal of 75 stations spread across campus by the end of the year. The objective is for students to fill their own re-usable bottles with water rather than buying the water and then disposing of the plastic bottles.

The campus-wide effort was spearheaded by the Vermont Student Environmental Program (VSTEP), a student run, non-profit organization created in 1988 to expand UVM’s recycling program and address environmental issues on Vermont campuses. Mikayla McDonald ’10 and Marlee Baron ’11, both former VSTEP presidents and senators on the Student Government Association, were among the initial group of students to address the bottled water issue and started planning Bring Your Own Bottle (BYOB) days and informational tabling events. Baron, who wrote her senior thesis on “Creating a Sustainable Beverage System at UVM,” and McDonald crafted bottled water resolutions that were passed by the SGA.

“Marlee was the one who really brought the issue to the forefront,” says McDonald. “It’s really an awareness issue, so our focus was educational outreach. Our efforts also coincided with our activities on SGA, so we had decent access to student government and other student groups. Some of the Eco-Reps (undergraduate leaders who foster environmental responsibility on campus by educating their hall mates about sustainability issues) had been working on bottled water issues for years, and we sort of picked up the cause. We wanted people to be aware of the privatization by companies of public water resources.”

Current VSTEP president Greg Francese continued the effort by helping collect more than 1,200 signatures from students in support of a resolution calling for a sustainable beverage system, surpassing the 10 percent requirement for an SGA resolution. Student efforts to reduce the usage of bottled water were already paying off as sales of flat, unflavored water dropped from 362,000 bottles in 2007 to 235,000 in 2010.

According to the Association for the Advancement of Sustainability in Higher Education, UVM is one of the only public institutions in the U.S. and among just 15 in North America to have eliminated bottled water sales from campus. Niles Barnes, project coordinator with AASHE who also provides support to the American College & University Presidents Climate Commitment, says changing vendor language to ensure healthy vending choices is an issue that is even less prevalent.

Richard Cate, vice president for finance and administration, says the funds from the Coca-Cola contract can be replaced on some level by newer contracts with national and local vendors who will diversify the beverages offered on campus. Funds generated from new contracts will support student financial aid. Revenue from the existing contract has been used for student financial aid, student programming, athletics and operations. The Athletics Department will issue a separate request for proposals for beverages for athletics events, thereby creating a source of revenue for athletics to replace the existing one.

The university will release a request for proposals in February for the vending contract, which has comprised less than 20 percent of bottled beverages sold as part of the 10-year contract. The new vending services contract will end in 2015, coinciding with the end of the existing university dining contract.