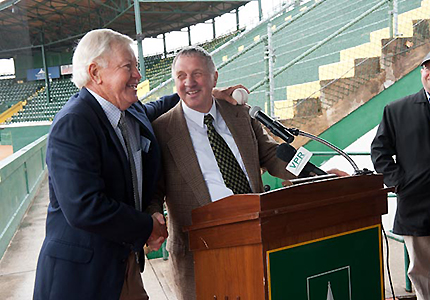 The University of Vermont and the Vermont Lake Monsters announced today that they have reached an agreement on a 20-year lease for the use of Centennial Field for minor league baseball in Burlington.

Under the terms of the lease, the Lake Monsters will pay UVM $1 per year for the use of the facility. Under the prior arrangement, the yearly fee for the lease, which had to be renewed annually, was $30,000.

The significance of the new lease is two-fold:  it essentially eliminates an annual expense for the team and removes the year-to-year uncertainty that was an obstacle to major investment in the facility by the Lake Monsters and outside entities.

“This is a win-win-win deal,” said John Bramley, interim president at UVM. “It keeps the Lake Monsters here for the foreseeable future and allows them to invest in facilities and field improvements to solidify their position with the league and the fan base. It allows UVM to contribute to the benefit of the community by continuing the use of historic Centennial Field, rather than having it sit idle. And, importantly, it preserves a treasured summertime activity, minor league baseball, for the enjoyment of families throughout the local community and the State of Vermont.”

"The Vermont Lake Monsters are very appreciative of the university's commitment to a long-term lease,” said team owner Ray Pecor. “We are excited about being able to continue to bring Lake Monsters baseball to our fanbase and explore all of the opportunities that exist in renovating our beautiful ballpark."

Vermont governor Peter Shumlin added, “This is a clear example of UVM stepping up to the plate and hitting it out of the park and of Ray Pecor following up with his own monster home run. The Lake Monsters are an asset the entire state benefits from, both as a family-friendly recreational activity and one that promotes tourism and economic activity. I'm thrilled that both parties have paved the way toward keeping minor league baseball in Vermont for years to come. The cooperation that made this deal possible is a perfect demonstration of the Vermont way."

“Minor league baseball has been in Burlington for more than a quarter century, with historic Centennial Field as the perfect setting,” said Burlington mayor Bob Kiss. “Professional baseball brings excitement, economic vitality and a sense of community to Burlington and beyond. I especially appreciate the commitment of UVM, Ray Pecor and the Lake Monsters organization in ensuring we’ll enjoy baseball here for many years to come.”

“I applaud UVM for making possible this important first step toward saving Centennial Field and keeping the Lake Monsters in Burlington,” said Burlington mayor-elect Miro Weinberger. “I look forward to working hard on the next steps in the months and years ahead.”

The Lake Monsters are a Single A team affiliated with the Oakland Athletics that plays in the New York-Penn League. An independent  study conducted in 2010 concluded that Centennial Field will require $3.3 million to cover immediate needs and $9.2 million to bring it to the standards required by Minor League Baseball.

The land for Centennial Field was originally purchased in 1904 in honor of the centennial anniversary of the university's first graduating class celebrated that year.