The Upset: A Look Back at UVM’s First-Ever March Madness Win 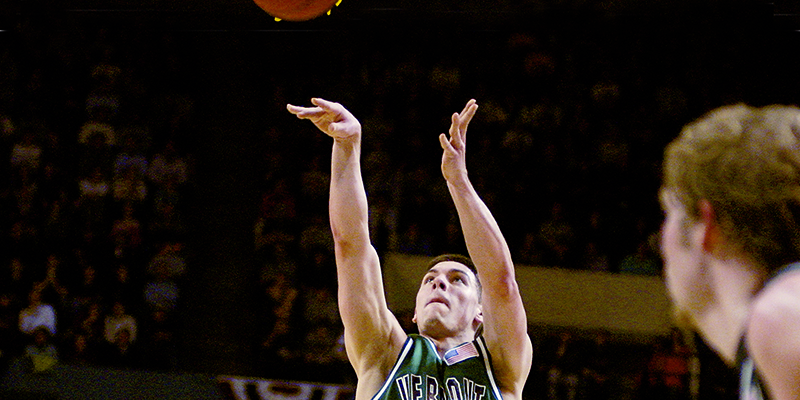 T.J. Sorrentine's "shot from the parking lot" was the fatal strike in the Catamount's 2005 victory over Syracuse, the progam's first NCAA March Madness win. The game is still remembered by fans nearly 15 years later, as the numbers of Sorrentine and teammate Taylor Coppenrath are retired. (Photos: Sally McCay)

This weekend, UVM will retire the jerseys of two Catamount legends, T.J. Sorrentine (No. 11) and Taylor Coppenrath (No. 22). As these numbers head for the rafters, we take a look back at the 2005 graduates’ senior season, and the team’s landmark win over No. 4 seed Syracuse in the NCAA Tournament.

John Becker remembers exactly where he was when Vermont stunned national powerhouse Syracuse in overtime in the opening days of the 2005 NCAA men’s basketball tournament. The current UVM coach was an assistant at Division III Catholic University in Washington, D.C., and like many others, had taken that Friday off to monitor the early rounds.

“I had been home watching games all day and was standing in front of my television, rooting for Vermont,” Becker says. “I think most of the country was doing the same thing because Vermont was such a neat story. I had no idea I would be the head coach there one day.”

Becker is far from alone in recalling with crystal clarity the defining moment in UVM men’s basketball history. That victory—as unexpected as it was exhilarating—still resonates throughout the state. It not only marked the end of an era, but also established the program as more than a one-hit wonder. In the years since, Vermont has used the exposure and momentum created by that history-making win as the foundation for one of the most successful mid-level programs in the country.

“That game meant so much to so many people and that’s something I’m reminded of every day,” says Tom Brennan (below), the man who led the Catamounts to tournament glory in the final season of his UVM coaching career. “But the thing is, do you think for a minute that if we hadn’t stayed good after I left, people would still be talking about Syracuse?” 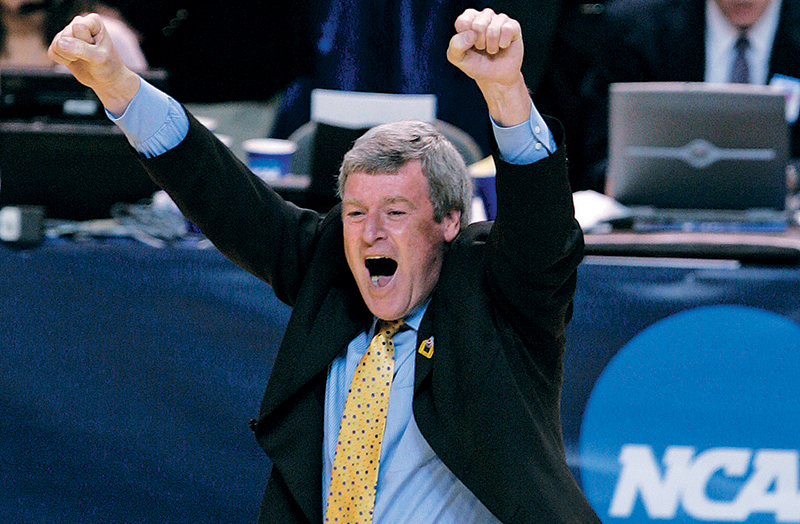 Brennan led Vermont for nineteen years, the first three of which produced a cumulative record of 14-68. But beginning with the freshman class of 2000-01 that became seniors in 2004-2005, Vermont went 89-26, winning at least twenty-one games each season and reaching the NCAA tournament for the first two times in school history.

“It’s really hard at the mid-major level to be good consistently—it tends to be cyclical,” Becker says. “But we have a program that has maintained a high level and it all really started with Syracuse. That success has helped us sustain something players want to be a part of.”

Here is a look back at the weekend in Worcester, Massachusetts, that will stand as the benchmark of Vermont basketball for ages.

The high expectations for 2004-05 were jolted in early November when Brennan announced his plans to retire at season’s end. Vermont was coming off back-to-back NCAA tournament appearances but how would the senior-laden Catamounts react to this unsettling news?

It was never an issue. UVM began by giving preseason No. 1-ranked Kansas all it could handle in a 68-61 loss to the Jayhawks in Lawrence. The Catamounts also lost at eventual national champion North Carolina, but cruised through America East play with a 16-2 record before sweeping three games in the conference tournament. An 80-57 beat down of Northeastern in the finals sent Vermont to the NCAAs for a third consecutive year with an overall mark of 25-7. 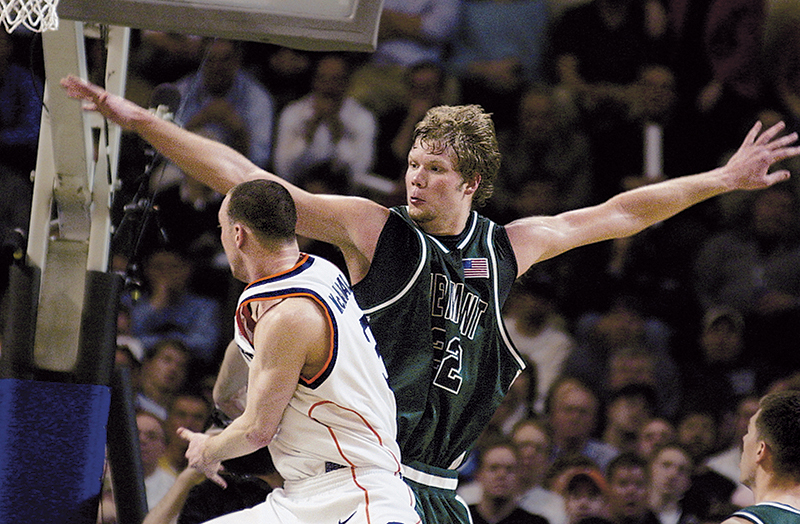 These Catamounts were a lovable bunch, led by swashbuckling point guard T.J. Sorrentine and native son Taylor Coppenrath (above), from Barnet, in the low post. They formed the top-scoring tandem in Division I, teaming to average forty-four points a game.

Canadian David Hehn at off-guard and Germain Mopa Njila, an athletic small forward from Cameroon, gave Vermont two more veterans. The four seniors came into the Syracuse showdown with more than 400 career starts. Sophomore forward Martin Klimes from the Czech Republic, who played in thirty games as a freshman, completed the starting five.

“We had a lot of things going for us,” says Hehn. “For the seniors, whether it was stars like T.J. and Taylor, or guys like me and Germain, we all knew our roles and we were really prepared.”

The Cats had talent. They had the maturity that comes with starting four seniors. And their tournament experience would not leave them awestruck by the NCAA stage.

As fans waited for the awarding of seeds for 2005, there was buzz that UVM’s resume was strong enough (its rating percentage index used to evaluate teams was in the top thirty) to vault is as high as an eleventh seed. But Vermont placed thirteenth, a result that led author and veteran Washington Post sports columnist John Feinstein to label the Catamounts as the most under-seeded team in the entire field.

“I had seen Vermont play a couple of times that year and quite a bit over a three-year period,” says Feinstein. “They had the numbers and they passed the eye test. But the team that really got screwed was Syracuse because they wound up playing a team that was much better than a number thirteen seed.” 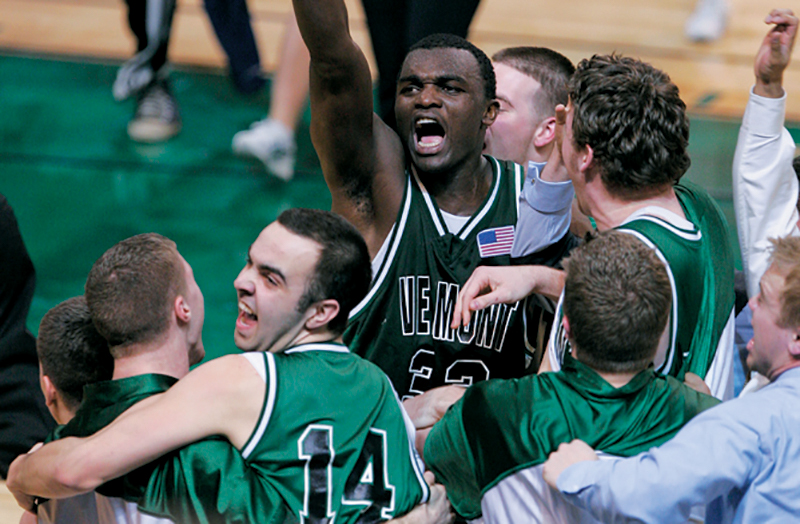 The good news for Vermont was it was sent to Worcester, Massachusetts, for the opening weekend after being banished to Salt Lake City and Buffalo in its first two NCAA appearances. The bad news was the Cats drew fourth seed Syracuse, a perennial top ten program just two years removed from a national championship. The Orange were led by All-Americans Gerry McNamara and Hakim Warrick and came in on a roll after winning the Big East Conference tournament.

“People thought they could be a Final Four team and they played that 2-3 zone that gave everybody trouble,” Brennan says. “But after we found out the seeds I got a call from Tark (former UNLV Coach Jerry Tarkanian), and I’d talked to him maybe once in ten years. He said don’t get flummoxed, you can beat that zone. It looks better than it is.”

With a crowd of more than 13,000 filling the DCU Center, Vermont staggered to a 23-19 halftime deficit after shooting 27 percent from the field and hitting only one of nine three-point attempts.

But the Catamounts proved to themselves they could compete with Orange. In the second half, a dogged man-to-man defense that produced twenty-four turnovers, and a work-the-clock offense enabled UVM to take a five-point lead with just under six minutes remaining.

“We were having a hard time getting shots, but our kids were playing so hard defensively and we just kept hanging around,” Brennan says. “Syracuse pressed us and we coughed it up a few times, but they went back in the zone and we were able to get our legs under us again.”

Tied at 51-51, Vermont appeared to have won in regulation when Mopa Njila, who scored a career-best twenty points on 9-of-10 shooting, hit a baseline drive with three seconds left. But official Timothy Cofer ruled Mopa Njila (above at center) had stepped on the baseline and the game headed to overtime.

It remains one of the signature moments in NCAA tournament history; one replayed every year when March Madness begins its annual dance.

Leading 56-55 with just over a minute remaining in overtime, Sorrentine had the ball across midcourt as Brennan yelled to his captain to run “Red,” an end-of-the-shot-clock play where Sorrentine tries to find Coppenrath in the lane. Sorrentine motioned to his coach that he had things under control.

Sorrentine shouted “run the play” with no intention of running anything.

“In that situation, I thought if we could just get it to four points, we could win,” Sorrentine says. “But if I passed the ball I wasn’t sure I was going to get it back. I thought, ‘I’m going to shoot this ball.’”

As Syracuse defenders McNamara and Josh Pace moved higher on the perimeter, Sorrentine backed up and launched a twenty-six-foot bomb from the top of the key that swished cleanly through the net. Coppenrath still calls it “the shot from the parking lot.” To that point, Sorrentine had shot 4-for-19 for the game.

“That’s a shot every kid dreams of making, but it’s not one you practice,” he says. “I tried it again the next day at practice and air-balled it.”

Brennan loves to mention that it wasn’t the only time Sorrentine hadn’t paid attention to his coach.

“That shot changed our lives,” Brennan says. “You wouldn’t coach that shot; it was a terrible shot. But T.J. certainly had earned the right to take it, and he always believed the next one was going in.”

Sorrentine’s dagger was the fatal strike in what became UVM’s 60-57 victory. In a game in which neither side led by more than six points, the Green Mountain boys toppled the Syracuse giant.

“Talking with Tom before the game, he said they were done with this ‘it’s great to be here stuff,’” says Feinstein, who was courtside that night. “They were there to win. And I was lucky enough to be in the building to see it.”

Vermont’s magic carpet ride ended two days later when a No. 5 seed Michigan State team that would reach the Final Four methodically ground down the Catamounts, 72-61. That loss did nothing to diminish what the Catamounts had accomplished.

“The magic of that weekend has never gone away and I am as shocked about that as anything,” Brennan says. “It happened, and it was great, but it’s not the only good thing that has happened to Vermont basketball.”

This story originally appeared in the Spring 2015 edition of Vermont Quarterly.

Catamount Hoops Alumni: Where Are They Now?
UVM to Retire Jerseys on Oct. 26