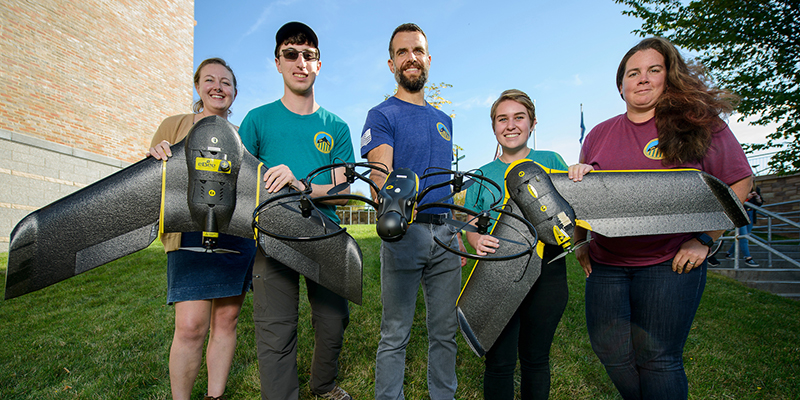 Research conducted by UVM’s Spatial Analysis Laboratory (SAL) will help the Federal Aviation Administration set guidelines for the safe use of drones during disasters. Pictured with drones are members of the SAL team, including (left to right) Emma Estabrook, a graduate student in Natural Resources; Benjamin Greenberg, Environmental Sciences major; Jarlath O’Neil-Dunne, director of the SAL; Vivian Karins, Environmental Sciences major; and Kelly Schulze, a staff member at the lab. Other students will also be involved. (Photo: Brian Jenkins)

As the popularity and usage of unmanned aerial systems (UAS), commonly referred to as drones, continues to grow, keeping the nation’s airspace system safe has become a critically important goal for the Federal Aviation Administration.

To help accomplish that objective, the University of Vermont has joined the FAA’s Alliance for System Safety of UAS through Research Excellence, or ASSURE, alongside 23 of the world's leading research institutions and 100 industry and government partners. Consortium members together provide the expertise and infrastructure needed to help the FAA conduct the research and testing necessary to make laws that keep the skies safe.

As part of the FAA’s Center for Excellence, the University of Vermont’s Spatial Analysis Laboratory will research the use of drones in disaster situations, providing the agency with data for their safe operations in times of disaster.

“UVM’s Spatial Analysis Lab has been a critical resource for the State of Vermont and local communities that need new tools to plan for and recover from disasters,” said Senator Patrick Leahy (D-Vt.) “I’m delighted that they will be lending their expertise to ASSURE, which has a vital mission to develop research in crucial areas that inform decision makers at the FAA about the rapidly changing UAS landscape.” As the vice chairman of the Senate Appropriations Committee, Leahy has increased funding for the FAA’s Center of Excellence for UAS Research over the past two fiscal years and included guidance for the Center to expand its work around disaster recovery.

“The airspace during an emergency or disaster has always had rescue and media helicopters,” said Jarlath O’Neil-Dunne, director of the UVM’s Spatial Analysis Laboratory. “Today the space can also become crowded with drones – from the fire department, state and federal agencies, the media, even the person down the street who wants to shoot a YouTube video. UAS are an exciting new technology that could revolutionize disaster response, but there is a lot of work to be done if we are to employ them in a safe and effective manner. We look forward to working with FAA and our partners in ASSURE to help advance UAS for disaster response.”

“This partnership is a good fit for UVM,” said Richard Galbraith, vice president for research at the university. “Our Spatial Analysis Laboratory pioneered the use of UAS in monitoring emergencies and disasters in 2013. We have learned from experience how much this fast growing area of drone use needs regulation and oversight to prevent redundancy and keep everyone safe.”

Since ASSURE was established in 2015, the agency has worked alongside the FAA and manufacturers to provide guidance in creating a regulatory framework for drone use. Since then, ASSURE members have helped the FAA establish policy and training in areas ranging from air traffic control to flight over people and beyond line of sight.

“We’re thrilled to welcome the University of Vermont into the ASSURE network,” said Stephen Luxion, ASSURE’s executive director. “The university’s expertise in the incorporation of UAS during emergencies and disasters is extensive and will provide excellent use cases, as well as critical training and recommendations for the safe integration of UAS into our daily lives.”

The Alliance for System Safety of UAS through Research Excellence (ASSURE) consists of 25 of the world’s leading research institutions and more than 100 leading industry/government partners. ASSURE members are core to three FAA UAS test sites, lead four FAA research centers, have seven airfields and a fleet of 340 UAS – 24 more than the USAF. ASSURE’s goal is to provide the FAA with the research it needs to efficiently integrate UAS into our National Airspace System.