From Train Wrecks to Social Distancing 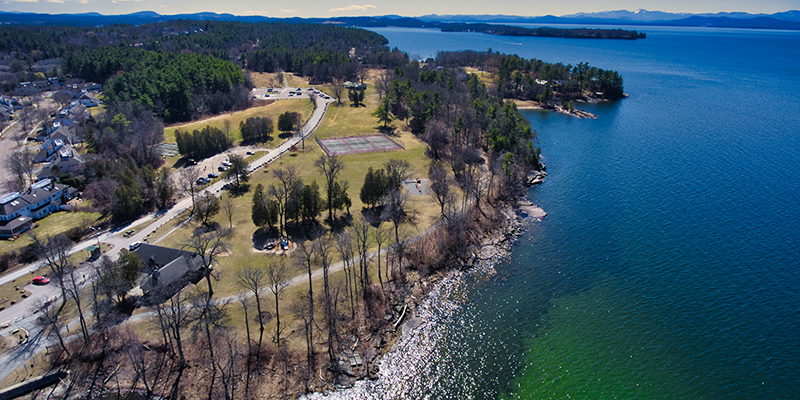 In 2015, when an Amtrak train went off the rails in a Vermont forest, officials at the state of Vermont contacted Jarlath O’Neill-Dunne, director of UVM’s Spatial Analysis Lab. Within two hours, he and his team were flying drones overhead, sending out photos of the wreck to help with recovery. “We’ve been using drones for disaster response in Vermont for a while,” he says, from floods to wildfires. ”They give us new capabilities to help people make more informed, better decisions.”

Now the UVM team hopes the overhead views from their advanced drones can play a part in preventing a public health disaster: they’re volunteering to help the City of Burlington’s parks department monitor the usage of parks during the COVID-19 pandemic, offering a bird’s-eye view of how well social-distancing guidelines are being followed during peak-use periods.

Vermont Governor Phil Scott ’80 issued a “stay home, stay safe,” order on March 24. Soon after, UVM’s O’Neill-Dunne and Adam Zylka ’14 offered to share video footage recorded at some of the most popular parks in Burlington, including Oakledge, the bike path, A-Dog Skatepark, and Leddy Park.

“During the early days of the governor's orders, it gave us a good ‘snapshot’ in time to identify how some of our larger regional parks were being used,” says Sophie Sauve, a parks planner for the city. Burlington Parks also established a Parks Ambassador program to have their own staff collect data on how parks are being used and to work with the community on how to best maintain social distancing in parks and other public spaces.

“Our objective is to keep parks open and the drone footage was one of the tools we used in assessing next steps as we navigate the governor's orders,” Sauve says.

The Spatial Analysis team, part of UVM's Rubenstein School of Environment and Natural Resources, has made five drone flights over the past few weeks. Undergraduate Jillian Joubert ’20, working remotely from home, leads an effort that pulls the video into an easy-to-use web app. By accelerating the footage, ten or fifteen minutes of overhead action—walkers and bikers zipping along a path, skaters taking laps in the skatepark—can be compressed into a few seconds.

“We can cover a really large area at peak times and give the parks staff another tool to gauge how things are going,” says O’Neill-Dunne, a fellow in UVM's Gund Institute. “For the most part, the video seems to show that people in Burlington have been doing a good job with social distancing.” And, over time, this collection of videos may give city leaders an unusual view of how patterns of behavior may be changing in Burlington’s popular parks as the world health crisis moves toward summer.

Joshua E. Brown
Our objective is to keep parks open and the drone footage was one of the tools we used. — Sophie Sauve, planner, Burlington Parks