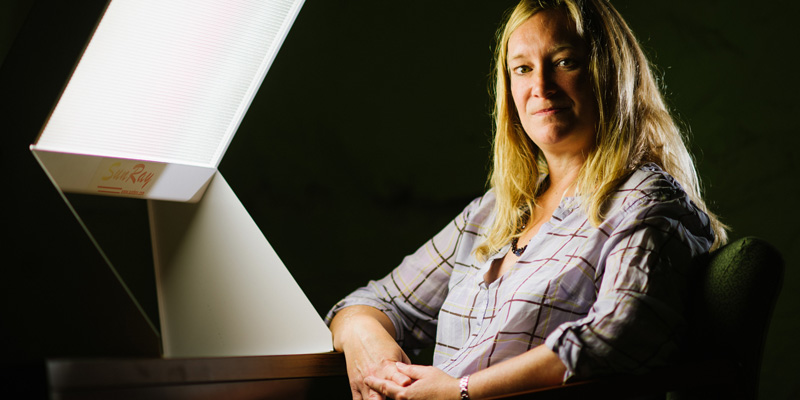 A new study published online Nov. 5 in the American Journal of Psychiatry casts a shadow on light therapy’s status as the gold standard for treating SAD, or seasonal affective disorder.

While the treatment is effective at addressing acute episodes of SAD, a SAD-tailored version of cognitive behavioral therapy (CBT) is significantly better at preventing relapse in future winters, the study found. Led by University of Vermont psychology professor Kelly Rohan and funded with a $2 million grant from the National Institute of Mental Health, it is the first large scale study to examine light therapy’s effectiveness over time.

Over 14 million Americans suffer from SAD, a mood disorder associated with depression and related to seasonal variations of light, ranging from 1.5 percent of the population in southern states like Florida to more than nine percent in the northern regions of the country. An estimated 10 to 20 percent of all cases of recurrent depression follow a seasonal pattern.

In the study, 177 research subjects were treated with six weeks of either light therapy – timed, daily exposure to bright artificial light of specific wavelengths using a light box – or a special form of CBT that taught them to challenge negative thoughts about dark winter months and resist behaviors, like social isolation, that affect mood.

After the six week treatment, subjects in the light therapy group were instructed to continue daily exposure until spring, and were offered access to a light box again the next winter. Subjects in the CBT group received therapy during two 50-minute sessions per week over the six weeks.

“Light therapy is a palliative treatment, like blood pressure medication, that requires you to keep using the treatment for it to be effective,” Rohan says. “Adhering to the light therapy prescription upon waking for 30 minutes to an hour every day for up to five months in dark states can be burdensome.”

The study showed that, by the second winter, only 30 percent of light therapy subjects were still using the equipment.

Cognitive-behavior therapy, by contrast, is a preventive treatment, Rohan says. Once SAD sufferers learn its basic skills it has enduring impact, giving the person a sense of control over their symptoms.

A companion study Rohan published in the American Journal of Psychiatry in September showed that light therapy and CBT were both highly effective in treating SAD during the  winter they were administered, with no statistically significant differences between the two approaches.

“The degree of improvement was substantial,” Rohan says. “Both treatments showed large, clinically significant improvements in depressive symptoms over six weeks in the winter.”

But given the difficulty in persisting with light therapy and the large number of Americans suffering from the recurrent disorder, CBT may be the better treatment option in the long term, she says.