In the Starting Gate 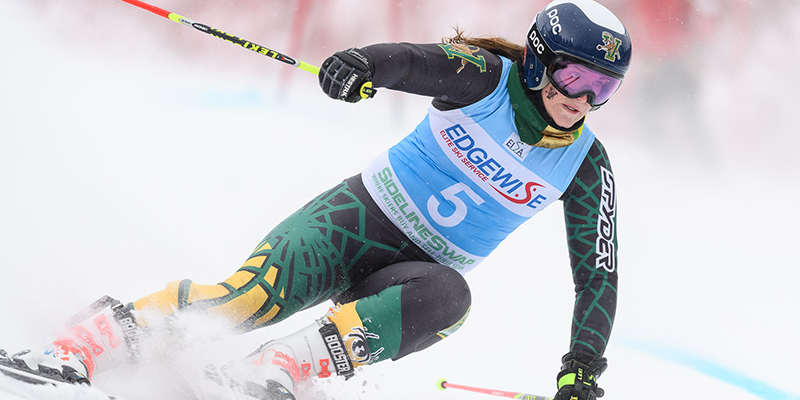 The Catamounts enter the NCAA Championships after a strong showing on collegiate and international stages. Paula Moltzan (pictured) represented with a V-Cat decal front and center on her black helmet in World Cup races early this winter; teammate and 2018 Olympian Laurence St. Germain was right there with her as the two standouts skied with the world’s best. (Photo: FasterSkier.com)

Six team national titles and fifty-seven individual national champs, not to mention 371 All-Americans, the University of Vermont’s long history as a force in collegiate skiing will be on display Wednesday, March 6, to Saturday, March 9, as UVM hosts the NCAA Championships in Stowe. The Catamounts enter nationals after a strong Eastern collegiate carnival circuit with multiple team victories and a second-place finish, just behind Dartmouth, at the EISA Championships. Apart from the collegiate scene, several Vermont skiers have also excelled in international competitions this season.

Here's a look at some of the Catamounts competing this week and a look back at their predecessors.

Paula Moltzan represented, with a V-Cat decal up front and center on her black helmet, in World Cup races early this winter. And Vermont teammate Laurence St. Germain, a member of Canada’s 2018 Olympic team, was right there with her as the two standouts skied with the world’s best. St. Germain took sixth and Moltzan was 18th in slalom at the 2019 FIS Alpine World Championships in Sweden. Back on U.S. snow for the Eastern Championships, St. Germain won the slalom and Moltzan joined her on the podium with a third-place finish. 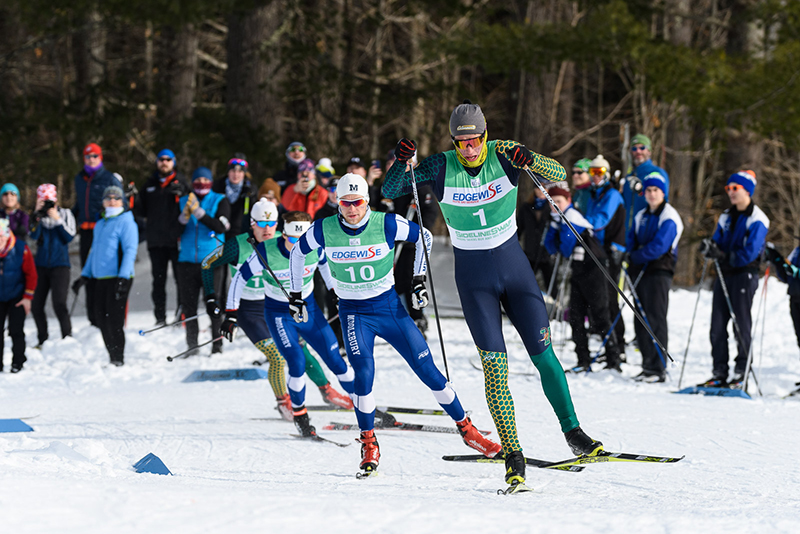 Bill Harmeyer’s 2019 season has included four individual victories, including winning the EISA Championship in the 20K classic. The Catamounts took three of the top four spots in that race with Ben Ogden and Finn O’Connell following him across the line in second and fourth. Harmeyer, a nursing major, is from South Burlington, and his twin brother, Henry, is also on the UVM ski team. (Photo: Steve Fuller) 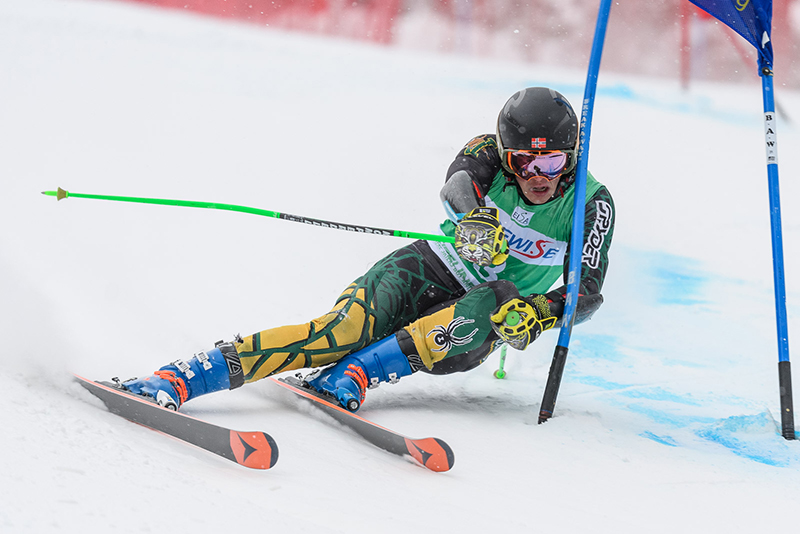 Alpine skier Max Roeisland brings solid NCAA Championship experience to the mountain this week. The senior business administration major from Oslo, Norway earned first-team NCAA All-American status in 2017 and 2018, and he was the EISA Men’s Alpine Rookie of the Year in 2016. (Photo: Steve Fuller) 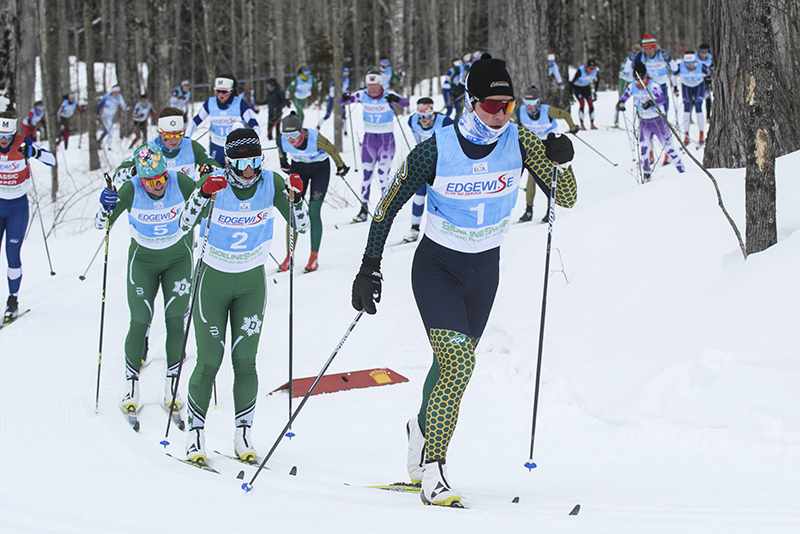 Over the course of the EISA season, sophomore Lina Sutro won six races, including the Eastern Championship in the 5K skate. She also competed in Finland as a member of the United States U23 team. The 2019 NCAAs will be Sutro’s second time skiing in the championships for the Catamounts. (Photo: Brian Jenkins) 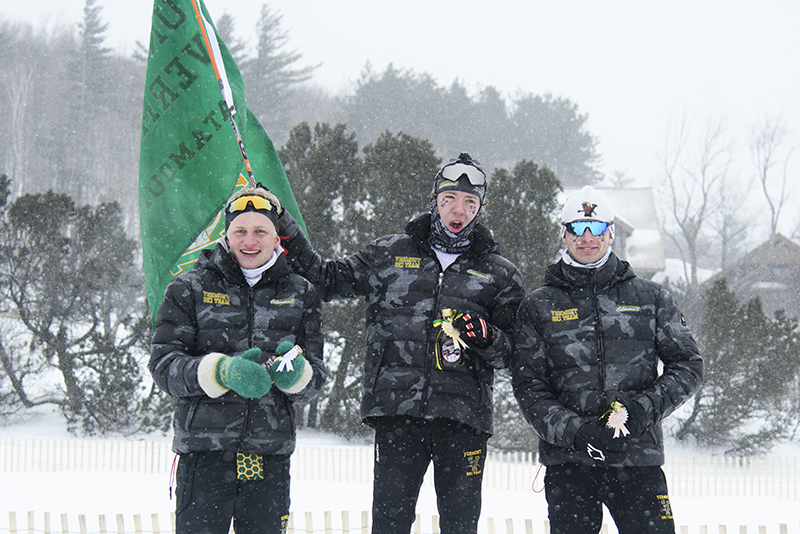 Ben Ogden (center) won races on the Eastern collegiate circuit and took second in the 20K classic race at the EISA Championships, but the major highlight of his season happened far from New England, at the Nordic Junior World Ski Championships in Lahti, Finland. Ogden, a freshman in mechanical engineering, was on the U.S. team that skied to a gold medal in the 4x5-kilometer relay. (Photo: Brian Jenkins) 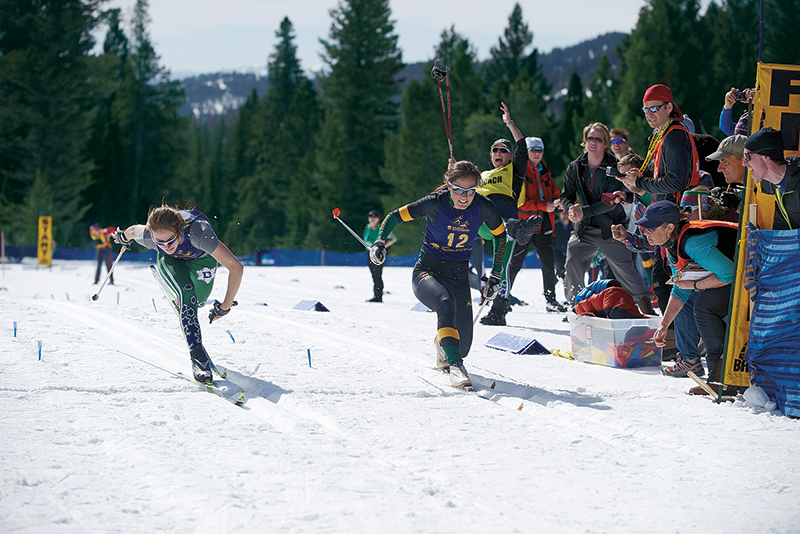 The Catamounts’ most recent NCAA team championship came in 2012. Competing in Bozeman, Montana, Vermont had a dominant performance, setting records for points scored and margin of victory over second place, the crowning moment of a season in which the Cats swept the Eastern Ski Carnival circuit. UVM has also won the national championship in 1994, 1992, 1990, 1989, and 1980. Pictured: UVM’s Amy Glen edged Dartmouth’s Sophie Caldwell for the 2012 NCAA Championship in the 15K classic race. (Photo: Brett Wilhelm) 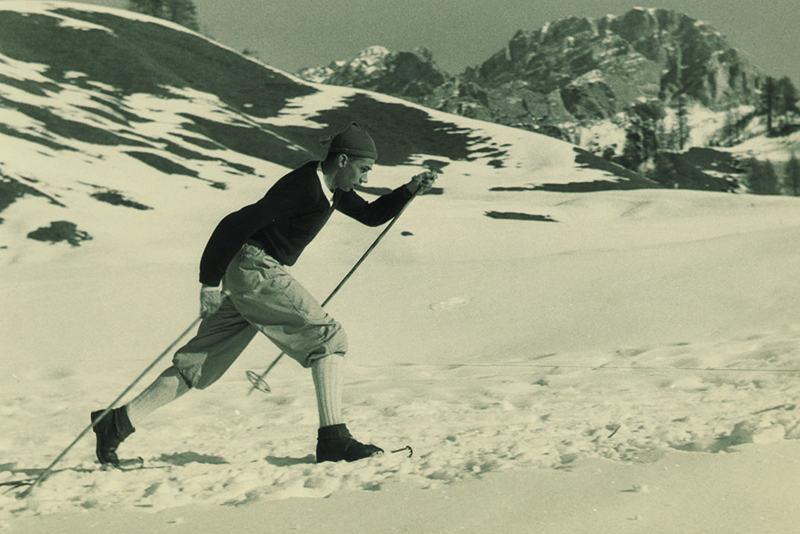 After graduation, scores of Catamount skiers have risen to the top ranks of their sport with Olympic gold medals, world and national championships. Competing in the 1956 Olympics, Nordic skier Larry Damon ’55 (pictured) kicked off a streak of winter sports Catamounts competing in every edition of the Games since. Peak performances by alumni include Barbara Ann Cochran’s 1972 Olympic gold in slalom and Lowell Bailey’s 2017 World Championship in biathlon.