Making new opportunities for her peers and career are all in a day's work, one that begins at 4 a.m., for the SGA President 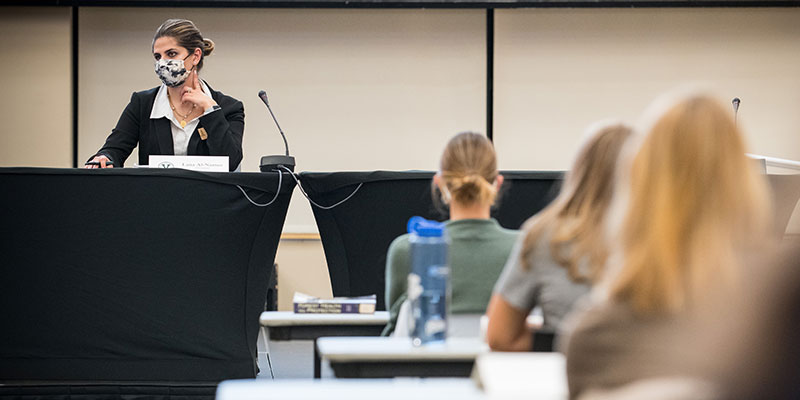 If you see Lana Al-Namee ’22 singing through her mask or skipping down Main Street when she thinks no one’s looking, please do not disturb. This brief journey between the Student Government Association (SGA) office and her off-campus job is her time to compartmentalize an ever-expanding to-do list while a carefully curated upbeat playlist does its job.

This is a tough year to serve as SGA President, to be sure, but Al-Namee reasons that she’ll likely always have her work cut out for her. Al-Namee is an Iraqi woman in UVM’s Grossman School of Business studying finance, marketing and economics. “I love taking on a new challenge,” she says. 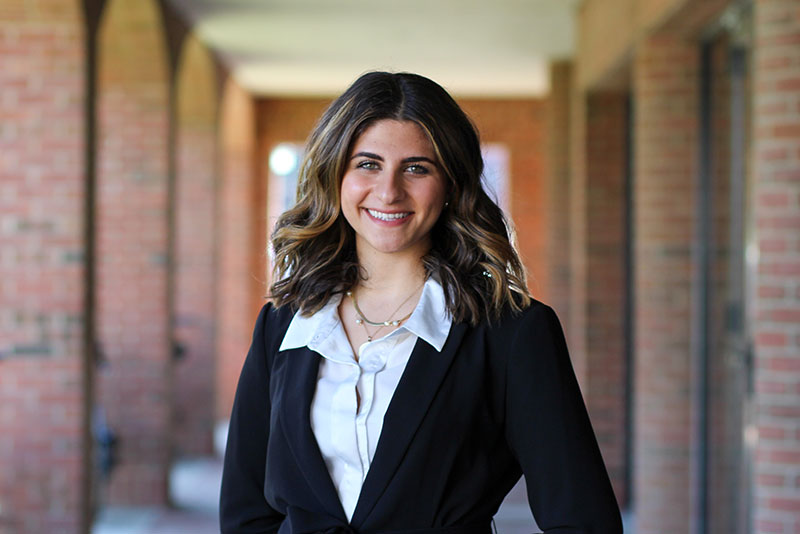 Following the footsteps of Aya Al-Namee ’15, her older sister and former SGA President, the younger Al-Namee was elected to office and sworn-in as president in spring — and that is where their similarity ends. Her first task in the new role was attending a UVM Strong Committee meeting to plan for a safe fall semester during a pandemic. “There was no transition report or guide that speaks to what we were about to experience. It was off to the races.”

On the ground, Al-Namee can be found organizing care packages for off-campus students and disseminating information to students about policies, violations reporting and standards for this new and ever-changing way of life. She starts her days at an ambitious 4 a.m. and approaches the role with a mindset for service and resource for students. It’s in this wheelhouse where Al-Namee hopes to ultimately land in her career as a pro bono lawyer someday.

“I want to do free legal work for folks who need it most and make sure they have adequate representation. That’s my dream job, if all barriers were removed — like finances,” she says.

One of her top priorities in both her official SGA role and informal fellow student role is improving access, resources and retention support to students who may have a disability, come from low-income households or be first-generation college students. She looks to Student Support Services' (SSS) TRiO program — housed in the Center for Student Success — as the on-campus hub for that access, and one that she will personally vouch for.

Having saved up before her first semester at UVM, Al-Namee was in a pinch when she discovered how expensive textbooks could be. “I called my sister and told her I didn’t know what to do. She gave some cryptic answer like, ‘I figured it out, so you can too’” — typical older sibling answer. But after researching and reaching out to SSS on her own, “I met with a wonderful human being there who said, ‘We can figure this out. We can make this work.’”

A self-described “young person who’s so ready to chase after it and hungry for opportunities,” Al-Namee has been making it work ever since. With one more semester left in her presidential term she intends to continue serving and supporting students as she can, and hopes to turn her attention to the future. It’s an approach that she admits can be frustrating when she can’t see rapid change happening. “But a good analogy a friend told me the other day was: If you water a plant every day, can you tell the difference that it's grown? No. Come back to it in a year and see how much it's grown.”