Spiders: Survival of the Fittest Group 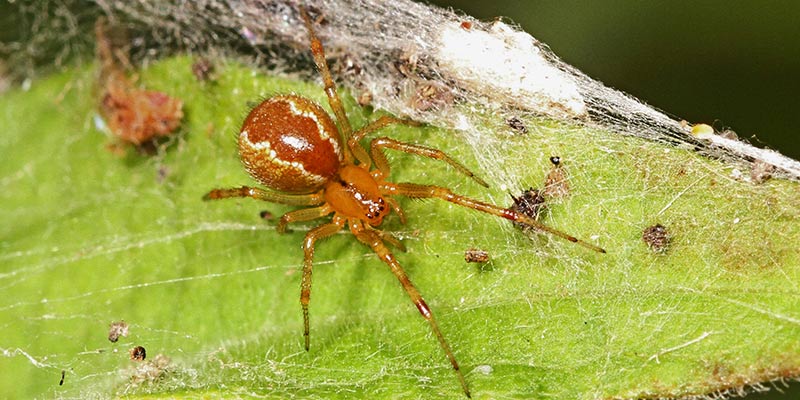 Along rivers in Tennessee and Georgia, scientists have been studying brownish-orange spiders, called Anelosimus studiosus, that make cobwebby nests “anywhere from the size of a golf ball to the size of a Volkswagen Beetle,” researcher Jonathan Pruitt says. The individual spiders are only the size of a pencil eraser, but they form organized groups that can catch prey ranging from fruit flies to small vertebrates. “We have found carcasses of rats and birds inside their colonies,” Pruitt says. Unlike most spiders, which are solitary, these social spiders work together in groups.

Now new research shows that they evolve together in groups, too.

Say “group selection” among some groups of evolutionary biologists and you won’t be invited back to the party. But Jonathan Pruitt, at the University of Pittsburgh, and Charles Goodnight, at the University of Vermont, have been studying generations of these Anelosimus spiders — and have gathered the first-ever experimental evidence that group selection can fundamentally shape collective traits in wild populations.

Their results are presented in the Oct. 1 online edition of the journal Nature.

“Biologists have never shown an adaptation in nature which is clearly attributable to group selection,” Goodnight said. “Our paper is that demonstration.”

In his 1859 masterpiece, On the Origin of Species, Charles Darwin puzzled over how ants could — generation after generation — produce workers that would serve the colony — but were sterile. Evolution by natural selection has often been understood to work at the level of the organism: the traits of an individual determine whether it will survive and reproduce. How could these sterile ants persist in nature, he wondered, if they didn’t reproduce?

“This difficulty, though appearing insuperable, is lessened, or, as I believe disappears, when it is remembered that selection may be applied to the family, as well as to the individual.” In other words, evolution by natural selection, Darwin thought, could operate at numerous levels, including groups: “A tribe including many members,” Darwin wrote in Descent of Man, who were able to “sacrifice themselves for the common good, would be victorious over most other tribes; and this would be natural selection.”

But the idea that natural selection can operate on groups, and can produce group-level adaptations, has been under siege in a philosophical and semantic war among biologists since the 1960s. Though group selection has been fraught with controversy and confusion for decades, the fundamental idea is plain: in groups of plants or societies of animals where an individual’s fitness is tightly tied to the performance of its group, evolution will favor traits that help increase the group’s success. These traits, in turn, will increase the individual’s long-term evolutionary success.

On farms, group selection has been clearly observed to succeed. There, breeders are more successful when they select among entire cages for groups of hens that produce the most eggs — rather than selecting individually productive birds. All the birds in cages that produce lots of eggs — regardless of which individuals are doing the egg-laying — get to reproduce and pass on their genes to the next generation. Those in low-producing cages, even if there are a few star birds in the mix, go to the slaughterhouse.

Still, a prominent group of biologists has long argued that “the conditions enabling group selection to be a potent evolutionary force essentially never occur in nature,” notes an essay that accompanies the new Nature study.

Pruitt and Goodnight’s study of spiders shows that a group-level adaptation — a critical ratio of two types of females — is, in fact, a potent evolutionary force in nature. Female spiders in Anelosimus colonies fall into one of two categories of behavior: “aggressive” or “docile.”  In places with lots of resources for these spiders, the scientists observe that small colonies are dominated by docile females. As the colonies grow bigger, so does the frequency of aggressive females. In these places, as the colony grows, social parasites may be the biggest threat to their long-term survival, and aggressive females prove useful.

In any case, what the scientists show in their study is that this shifting ratio — a collective trait of a whole colony — is adapted to specific locations. “Certain ratios yield high survivorship at some sites, but not others,” the new study notes. So, when native colonies were perturbed — their docile-to-aggressive ratios thrown out of whack — they, somehow, sensed this as an extinction risk, and, over several generations, readjusted their ratio back to normal. Remarkably, when artificially assembled colonies were placed in new locations, the spiders — over two generations — attempted to recreate the composition of docile-to-aggressive spiders that would be ideal in their home conditions — where the colony evolved — even if the environmental conditions at the new location were different.

“They’re continuing to make the phenotypes, the trait at a group level, that would have been advantageous if they had stayed home,” Pruitt says, “But they seem to have no idea that they’re at a new site and that what they’re doing is going to doom the whole colony. All the friends die.”

“Our observation that groups matched their compositions to the one optimal at their site of origin (regardless of their current habitat) is particularly important,” Pruitt and Goodnight write, “given that many respected researchers have argued that group selection cannot lead to group adaptation except in clonal groups and that group selection theory is inefficient and bankrupt.”

“Group selection has become a scientific dust bunny, a hairy blob in which anything having to do with ‘groups’ clings to anything having to do with ‘selection,’” famed Harvard psychologist Steven Pinker wrote in a 2012 attack on group selection. And clearly, the naïve 1960s view that, say, a bird could choose to not reproduce for the good of its fellow birds, or that lemmings toss themselves suicidally off cliffs to alleviate overcrowding, has been wholly discredited. “Biology doesn’t work that way,” Charles Goodnight says.

Yet, a flock of birds turns together. Ants build bridges with their bodies. Monkeys organize into treetop societies warning each other of approaching foes. Social animals succeed in nature because they have unique and powerful group traits that individual organisms can’t have. Organisms' relatedness is part of the explanation for these social and cooperative behaviors. That is, because kin have shared genes, it can mean that helping your sisters is helping yourself. The empirical evidence that Jonathan Pruitt and Charles Goodnight have gathered and analyzed about Anelosimus spiders points to a mechanism that complements, but extends beyond, the scientific orthodoxy of “kin selection.” Their field study shows natural selection working on a collective trait — the docile-to-aggressive ratio, known to pass down from generation to generation — that has led to an adaptation that determines whether whole colonies survive or die. In other words: group selection observed in the wild.