Science at the South Pole

Q&A with UVM President Garimella about his trip to Antarctica 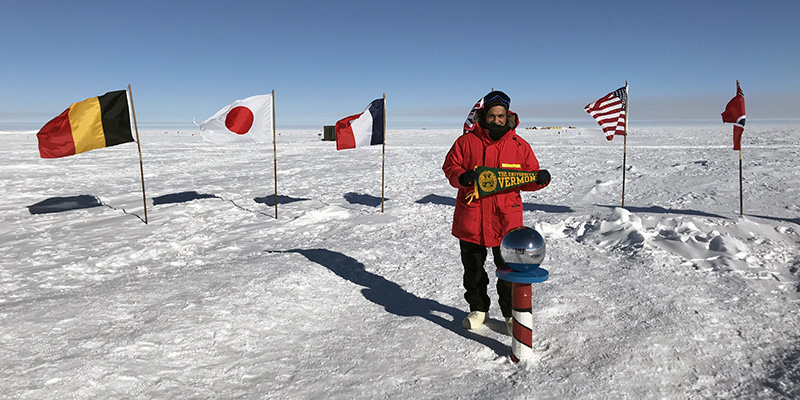 Green and gold waves on the South Pole. As a member of the National Science Board, UVM president Suresh Garimella spent a week in December touring the vast ice sheets and landscapes of Antarctica—and inspecting the remarkable science facilities run by the U.S. National Science Foundation on the coast of Antarctica and at the South Pole itself. (Photo: Courtesy of Suresh Garimella)

In antiquity, people speculated about the existence of a land at the southern end of the world. “There must be a region bearing the same relation to the southern pole as the place we live in bears to our northern pole,” reasoned Aristotle. He named this place “Antarktikos.” But even into the nineteenth century, Antarctica was entirely shrouded in mystery—and the first person to set foot on its ice was probably a seal hunter from Connecticut, Captain John Davis, in February of 1821, just one year after the giant continent was first sighted from aboard a Russian ship.

“Now it’s critical—existentially critical—to understand Antarctica,” says University of Vermont president Suresh Garimella. In a warming world, melting ice in Antarctica has the potential to contribute more than a foot of sea-level rise by 2100 and two-hundred feet of potential sea-level rise is locked in its ice sheets. “Understanding how—and how fast—the glaciers and ice sheets are moving, melting and growing in this remote part of the planet is of great consequence for all of us,” he says.

As one of twenty-four members of the National Science Board appointed by the President of the United States, Garimella spent a week in December touring the vast ice sheets and landscapes of the Seventh Continent—and inspecting the remarkable science facilities run by the U.S. National Science Foundation on the coast of Antarctica and at the South Pole itself.

UVM science writer Joshua Brown spoke with Garimella about his trip, to learn more about what is being discovered now at the southern end of the world.

Why did the National Science Foundation fly you to Antarctica?

The United States has the largest presence of any country working in Antarctica. We have more than one thousand scientists and staff deployed there. These people are working on projects ranging from a new international effort to understand the Thwaites Glacier—one of the most unstable glaciers in Antarctica, sometimes described as the “weak underbelly” of the ice sheet on West Antarctica—to an advanced neutrino laboratory searching deep in the cosmos for exploding stars, black holes, and, maybe, dark matter too.

These facilities in Antarctica are the largest that the National Science Foundation funds. So it's important for the National Science Board—that oversees the NSF—to understand the work, to see it firsthand, and get to know the science that's being supported and the challenges of working there. And it’s part of our fiduciary responsibility, to make sure the funds of the NSF are being spent wisely, strategically. Each year, three or four board members go down and this year I went.

There's great science—Big Science!—going on down there that couldn’t be done anywhere else. This work is very important for understanding climate change and so much else about the universe—and it was a profound confirmation of the tremendous value of the environment and climate change research happening at UVM.

Well, the sheer scale. The scale and extreme nature of the place are humbling. The word “extreme” is used a lot in talking about Antarctica, but I now understand why. Your arrival, your departure, all of that are completely at the mercy of powerful weather conditions there. We were delayed three days in returning. We would go to the airstrip, a new snow squall or weather pattern would come in, and we would have to return to base. This gave me a deeper appreciation of the many challenges of working there.

Many people have been surprised when they see dry land in the pictures (below). Well, Antarctica is a continent, not just a huge blob of ice. Yes, it’s mostly covered with ice—there are thousands of miles of icescapes—but about two percent is exposed land: vast dry valleys and mountains, rocky shores and beaches covered with penguins. You can read about a lot of things on paper, but Antarctica is very hard to get a sense for without actually having been there.

How did you get to Antarctica?

We first flew to Christchurch, New Zealand, where we were issued “ECW” gear—for Extreme Cold Weather—and then went next door to the International Antarctic Center where we gained an initial sense of the NSF presence in this part of the world.

It took us a day of waiting for good weather to be able to fly to Antarctica from New Zealand on a C-17, a large U.S. Air Force transport plane. As we traveled, we could see the first ice floes and icebergs. En route, we dressed in ECW gear for the first time. When we landed at the Phoenix Runway on the Ross Ice Shelf, it was a glorious day, blue skies and a clear view of 12,500-foot Mt. Erebus towering over the landscape. Then it was eight miles, much on ice road, to McMurdo Station on Ross Island. That evening we toured the facilities, including a station in a global radar network—called “SuperDARN”—that’s helping us understand solar wind and the Earth’s magnetosphere, which is important for how satellites and power grids work.

From there you went inland to the South Pole.

Yes, we were driving over to the runway to take the flight in an LC-130—a transport plane outfitted with skis—and I asked the driver, “where are you from?” “Oh, you wouldn't know,” he said, “it's a small place called Danville.” So that was great, to meet this young man, Shane Shelburne, from the Northeast Kingdom—in Antarctica! (And later I was giving a few remarks at a reception held in our honor, and afterwards a young woman introduced herself: Lindsay Steinbauer, a UVM grad, who supervises helicopter operations there. Vermont connections everywhere!)

It was a three-hour flight to the Pole and along the way we were invited to the cockpit and had beautiful views of the mountainous TransAntarctic Range. After we landed on the runway—a pounded track of snow—we saw a weather vane that reads “North” for all four directions. It was thirty below zero Fahrenheit, sixty below with wind chill, but inside the South Pole Station there’s a greenhouse where they can grow fresh produce. We had a tour of that facility, and learned about the IceCube neutrino detector—built in bore-holes that extend thousands of feet down into the ice. We were also introduced to the South Pole Telescope that studies cosmic microwave background to better understand the origins of the universe. The extremely dry and cold air at the South Pole gives it a clearer view of the sky than anywhere in the world.

We met so many wonderful, skilled people in Antarctica—and I was especially impressed with the enthusiastic students we talked to there who explained the ongoing science to us. The NSF offers a great and unique opportunity for students to spend time on the continent and at the Pole.

Before we flew back to McMurdo we did venture out to visit the ceremonial South Pole and geographic South Pole, where, of course, I had to proudly fly the UVM pennant.

Science at the South Pole.

What other science projects did you see underway?

The next day we took a helicopter tour of Dry Valleys, about 50 nautical miles from McMurdo. There, we saw Camp Fryxell, where scientists are studying lake biology and the surrounding terrain. Students at the site are living in tents and collecting data through the ice in Lake Fryxell. They’re part of an “LTER”—Long Term Ecological Research— limnology team. It’s remarkable how algae and other life can persist and even thrive in these conditions.

Toward the end of the trip we had the amazing opportunity to visit an Adélie penguin rookery and research site (below). It was 50-mile-an-hour-winds and way subzero and we were freezing and falling. But the penguins were going about their business, hatching their pups. We also learned about aquarium studies to better understand some of the remarkable adaptation of species to the conditions there, including gigantism in sea spiders and maturation of fish eggs in the Antarctic climate.

The U.S. is the only country with a station at the South Pole itself, and NOAA and others are doing remarkable work to explore the atmosphere there, using balloons and other techniques to study CO2, ozone and many other measurements that help us understand both weather and climate change.

At McMurdo, there are many science projects at work. For example, a Long Duration Balloon facility run by NASA—including one called “Super-TIGER” that is measuring cosmic rays to study the origin of heavier chemical elements, and another, BLAST, studies star formation.

During our tours, we saw some incredible places: Blood Falls, with oxidized iron from under Taylor glacier flowing out in red on the ice. At Wright Valley, there was a labyrinth formed where there was a massive flood outburst that carved the landscape. We saw a mountain with spectacular striations of Beacon sandstone and Ferrar dolorite. We also stopped in Bull Pass where we saw geological features called ventifacts, these incredible rock formations carved by wind-blown dirt and sand.

It was also humbling to tour inside the huts left behind by the early great Antarctic explorers, Robert Scott’s Discovery Hut and Sir Ernest Shackelton’s Nimrod Hut. It’s all preserved because of the deep cold there—and let’s just say that they didn’t have indoor greenhouses.

Yes, important science is being conducted there that couldn't be done anywhere else. Our board has toured other impressive NSF facilities around the world, including sites in Colorado making atmospheric measurements. But Antarctica is at a wholly different scale: at McMurdo Station there is an extensive set of facilities—from a hospital to a fire station—to support the U.S.’s scientific work, with great logistics support from the U.S. military.

There are many countries working collaboratively in Antarctica, and there are so many collaborative projects and conversations, but the United States and the National Science Foundation are the undisputed scientific leaders on that continent—and it makes you proud.

See more photos and videos from the trip