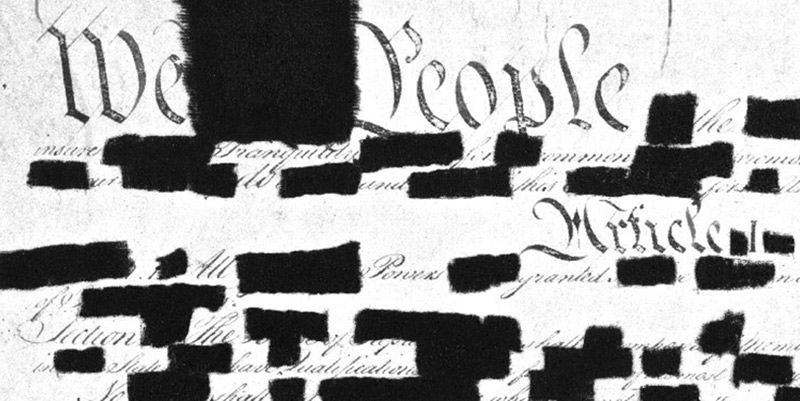 Detail of Jane Kent’s piece in "It Occurs to Me That I Am America," titled "Blackout." Kent’s rough rectangles of etching obscure many of the words in a reproduction of the United States Constitution.

Jane Kent is well-practiced in connecting her visual art with the written word. A printmaker, painter, and professor in UVM’s Department of Art and Art History since 2004, Kent has also created artist’s books, collaborating with writers Richard Ford, Susan Orlean, and currently focused on a work-in-progress with UVM English Department professor and poet Major Jackson.

Those projects involved taking a finished piece of writing and reacting to it independently with her own work. In the case of Susan Orlean’s The Orchid Thief, that morphed into The Orchid Thief Reimagined—eight unbound screen-printed pages, combining Kent’s art with Orlean’s words, all nestled in a silk-covered box. An edition of thirty-five, number six of which is at home in UVM Library Special Collections, was co-published by Grenfell Press and the Rhode Island School of Design.

One of Kent’s most recent projects is featured in a work that is more collective than collaborative, the 2017 book It Occurs to Me That I Am America, which brings together more than fifty contemporary writers and artists to consider “the fundamental ideals of a free, just, and compassionate democracy.” Published in celebration and support of the American Civil Liberties Union, the book is fiercely relevant and timely as the headlines unfold a battle for our identity as a nation and as individual citizens.

When Santlofer, a longtime friend of Kent’s, asked her to contribute to the project, she was quick to sign on. She was also quick to find the direction she wanted to take with her work for the book.

Kent had been working on making prints that blacked out text in documents, probing the concept of redaction. She says she was intrigued by the patterns of black and white and the visual examination of secrecy. “To me, the whole idea of redacting gets at, ‘What does secrecy look like?’ I’m always asking myself that question,” Kent says. Until Santlofer came calling on this project, her explorations of redaction had gone back in a drawer in her studio. The concept had found its moment.

Kent’s piece in It Occurs to Me That I Am America, titled “Blackout,” is the first visual image in the book, placed midway through a short story by Russell Banks. Kent’s rough rectangles of etching obscure many of the words in a reproduction of the United States Constitution.

Discussing the broad premise of the book, Kent says, “The whole point is what it is to make art and write in this contemporary moment—what it means to respond, to act, to do, and how important that actually is. To be able to do this in this small, quiet way is very, very gratifying.”