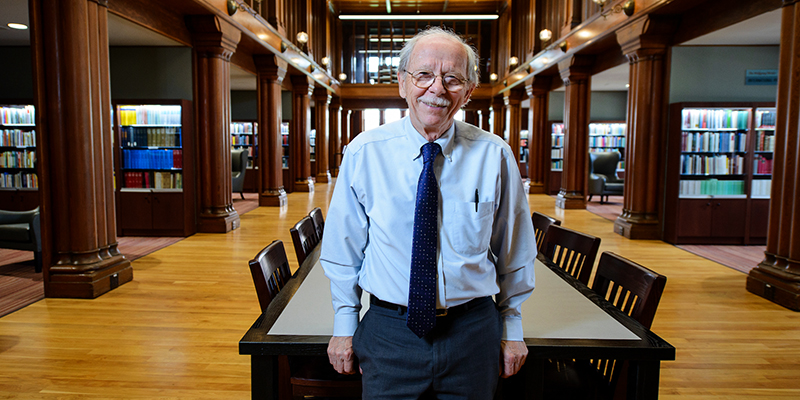 Wolfgang Mieder, professor of German and folklore, in Billings Library. The North Lounge is now home to his collection of 8,000 books on proverbs. (Photo: Brian Jenkins)

Of all people, Wolfgang Mieder would seem to deserve the peace of mind that comes from hard work and goals accomplished.

Over his nearly half century at UVM, the gregarious German professor has written or edited well over 200 books and published over 500 articles on proverbs, his academic specialty. For decades he’s produced a massive annual of proverb criticism called Proverbium, published at UVM. He’s given more than 500 talks in two dozen countries on his special topic. And he’s been the subject of no less than six festschriftenn, collections of essays written by scholars commemorating a fellow expert.

But for a good decade, Mieder has been troubled.

The source of his worry? A bulging addition to his home, the largest room in the house, that held – in floor-to-ceiling shelves covering all four walls – the massive array of proverb collections and proverb studies he had accumulated over five decades of acquisition.

It wasn’t the strain on the domestic infrastructure caused by his habit of adding 100 new books a year that was making him anxious; it was what would happen to all those volumes in the future. Mieder turned 75 this year.

His wife Barbara, surveying the stuffed shelves, would ask, “Wolfgang, you’re getting to an age; what am I to do if something happens to you?” Mieder recalls.

“It was such a unique library, I didn't want it to be dispersed,” Mieder says. “That was my big worry – seeing the books end up at some book sale selling for a dollar apiece.”

That would be a significant loss, and not just for sentimental reasons.

In the last few years, hordes of proverb scholars from the U.S., Kenya, China, Germany, Ireland, Hungary, Russia, Spain and beyond have trooped to Mieder’s home in Williston to access his proverb collections in 20-plus languages and dip into proverb studies with titles like The Adages of Erasmus and “Right Makes Might”: Proverbs and the American Worldview, Mieder's latest.

“There really is no other collection like it in the world,” Mieder says.

The logical way to preserve such a treasure would be to transfer it to the special collections department of a university. But time and again, at universities abroad and in the U.S., including UVM, Mieder heard the same story – his collection was too much of a good thing.

“Nobody wants collections,” he says. “There isn't the space.”

The size was a deal-breaker, confirms Jeff Marshall, Special Collections director at UVM. “There simply wasn’t room for it.”

The topic of what would happen to his collection was never far from Mieder’s mind, and he wasn’t above giving voice to his worries with his friends, some of whom – like Leslie and Tom Sullivan, UVM’s former president – were not only sympathetic, but in a position to help.

At Mieder’s 75th birthday party, a gala lunch held in the Alumni House’s Pavilion in February, the German professor was seated next to the Sullivans.

"He’s always sharing with me what his new books are, and I’ve seen his library,” Sullivan said. “He said, as he’s said before, ‘I'm not quite sure what I’m going to do with my books.’”

By coincidence, Sullivan had just returned from a visit to the Billings Library, where North Lounge, a majestic room once stuffed with books when Billings was UVM’s only library, was now eerily book-free while Special Collections staff puzzled over the space. It lacked the security to house any of the department’s collections. What could go there instead?

“Wolfgang, I have an idea; I’ll get back to you,” Sullivan said to his lunch companion.

Solution looking for a problem

Sullivan promptly paid a visit to then dean of libraries Mara Saule and suggested Mieder’s collection would be a perfect fit for North Lounge. She warmed to the idea, likening Mieder’s books and North Lounge to two puzzle pieces that fit together perfectly.

Marshall – who was close to moving a large collection of surplus books to the space for ornamental purposes only – was also bullish. The North Lounge space was “a solution looking for a problem,” he says, and one had magically appeared.

“Once it clicked, everyone was like, this is perfect,” says Selene Colburn, UVM Libraries’ communications director.

Sullivan, whose office contributed six sets of three book shelves to the project, delivered the news to Mieder, who was delighted. About two months later, his collection of 8,000 volumes – 6,000 from Mieder’s home and another 2,000 in a proverb archives down the hall from his office in Waterman Building – had taken up residence in Billings, moved in two giant truckloads and placed on the shelves in careful order by Mieder and three library staff.

The Wolgang Mieder International Proverb Library, the only one of its kind, officially opened in the middle of May.

For Mieder, the worry is gone. “It’s a dream come true, and I couldn’t be more grateful to UVM,” he said. “My American colleagues all say this is just incredible that the university has done this.”

Marshall is happy, too. “It looks great. And it’s a meaningful collection that will be useful to scholars.”

And there are ancillary benefits. Those proverb scholars from around the world whom Mieder hosted at his home for days on end? “Now they can sit at the library all day, and I'll take them out to dinner.”