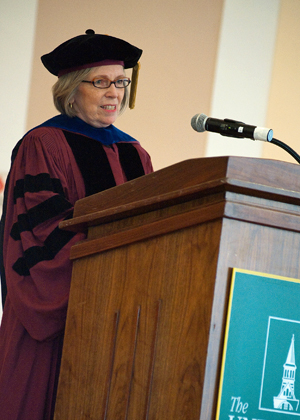 Eleanor Miller, professor of sociology and former dean of the College of Arts and Sciences, has been awarded a Fulbright research grant to study Portugal’s shift from criminalizing drug use to a treatment-based model for supporting addicts. In the spring of 2015 Miller will be based in Lisbon at Universidade Nova’s law school, Faculdade de Direito. In addition to her research she will be teaching an undergraduate course in inequality and crime and a graduate seminar in comparative drug policy.

Over the past ten years, explains Miller, Portugal has, in a sense, decriminalized drugs, putting those found with less than a ten-day supply into a treatment program rather than into the prison system (though dealing drugs remains illegal). “I’m interested in what there is to learn from the Portuguese for our state,” she says, noting Vermont’s increasing problems with substance abuse. Portugal has not, Miller adds, become a tourist destination for those seeking drugs, as Amsterdam has.

Miller, who has an expertise in sociology and gender, will be researching the effects of the policy on poor women in particular, as well as the broader societal impact of diverting public spending towards treatment. She expects to interview policy makers and government officials as well as private individuals.