Like most sugarmakers, Brian Stowe was used to working without a break from the start of the maple sugaring season in early spring to its bitter end in mid- to late April.

“If you had dental or medical issues, taxes, anything – all that had to be done before or after; during the season, you’re committed, 24/7,” says Stowe, sugarhouse operations manager at the University of Vermont’s Proctor Maple Research Center.

But after 28 sugaring seasons at the Proctor, Stowe encountered something new this year: weekends off.

Stowe owed his newfound free time to a combination of state-of-the-art new and cleverly re-purposed old technology at the Proctor sugarhouse, a model facility for the maple industry. If the innovations catch on as past improvements at the Proctor have, they could make sugar-making a vastly more humane, and profitable, enterprise in the future.

What first greets a visitor to the sugarhouse, a peaked two-story structure tucked in a grove of maples down the road from the Proctor’s main research facility in Underhill, is a sea of steel barrels just inside the door that contain the operation’s output for the year: 3,000 gallons of maple syrup, a record crop.

But it isn’t the quantity of maple syrup that made 2018 such a banner year, says Tim Perkins, a research professor in UVM’s Plant Biology Department who is the Proctor’s director. It was the greatly reduced time it took to produce it – an improvement that was responsible for Stowe’s more forgiving schedule.

One cause of the productivity leap is the next thing a visitor sees in the sugarhouse: a gleaming slab of stainless steel and aluminum, a Lapierre Hyperbrix -- “brix” is the industry term for sugar percentage -- evaporator.

The evaporator, along with a Lapierre Hyperbrix Reverse Osmosis machine, a compact assembly of geometric steel canisters situated in a room at the back of the sugarhouse, account for a big chunk of the labor savings, Perkins says.

One of the most time-consuming aspects of maple syrup production is boiling down sap, which is 98 percent water and only two percent sugar, into syrup, 67 percent sugar, a process that is done in an evaporator, a large flat plan positioned over a steady heat source.

While only the smallest maple operations still start their production with raw sap, which takes hours to reduce, many boil sap that has first been processed using reverse osmosis, or RO, a system that employs pressure to force the sap through a fine filter, separating the water from the sugar. This process produces a concentrate that is eight to 15 percent sugar and takes less time to reduce to syrup.

The "Hyperbrix" version of RO, used at the Proctor, employs much greater pressure and two minutely fine filters to take the process to another level, yielding a concentrate that is 37 percent sugar, with about 95 percent of the water removed.

By boiling concentrate that is already two-thirds of the way to maple syrup, the Proctor operation greatly reduces the time spent evaporating over traditional RO systems and saves money on fuel.

While the productivity improvements from the Hyperbrix evaporator and Hyperbrix RO machine were critical – technology so new and advanced that only about a dozen of the machines are in use in the U.S. and Canada – an old-school piece of equipment commonly used on dairy farms, a refrigerated bulk tank used for keeping milk cool, was just as important.

“Sap is like milk – it’s perishable,” Perkins says, and concentrate even more so. “You can leave it out for little while, but not for long.”

What that meant was that last year, the first that the Proctor used the Hyperbrix equipment, every sap run and concentration cycle required a boil in the evaporator.

“The problem with that is, every time you boil, you need to clean,” Perkins says. “And whether you boil for half an hour or eight hours, it still takes two-and-a-half hours to clean.”

The frequent boiling also added to the general chaos of the sugarhouse during the season, Stowe says. “Everything was happening at once, cleaning and prepping the Hyperbrix equipment, testing pumps, tapping trees, repairing tubing, installing research projects – and boiling concentrate.”

One day a way out occurred to Perkins, an active researcher who also mans the evaporator during boils throughout the sugaring season.

“Bulk tanks aren’t used by that many maple producers, and mostly they’re using them just for storage,” he says. “But I thought, if we can bulk up the concentrate for a few days in a refrigerated tank,” it will stay fresh and “allow us to actually schedule our operations. We could look at the forecast and say, the sap is going to run Monday and Tuesday. We’ll concentrate on Tuesday and Wednesday. And then we’ll boil on Thursday.”

The difference was night and day.

“This year we had 27 sap runs over the 10-week season,” Perkins says. “Normally you would boil 27 times. But with the refrigerated bulk tank, we boiled just 11 times.”

While the extra time off allowed Stowe to “decompress” in ways he had never experienced during sugaring season, it also enabled him to use his time more productively.

“We had more time available to go out and make the repairs in the woods, which ultimately makes more sap for us, and more money,” he says.

To Perkins it’s simply evolved to being a “modern food processing operation” with such improvements as plumbed water for cleaning equipment that becomes clogged with syrup. One metal pail hangs from a hook on the ceiling as reminder of the old days when Perkins and his co-workers schlepped water and brushes around the facility.

Either way, once the news gets out that the Proctor more than doubled its productivity this year while significantly cutting its costs, it’s bound to turn heads in the industry.

To its long list of its contributions – from the check valve spout that extends the season by a month or more to the capped maple saplings that allow maple syrup to made almost anywhere on earth – the efficient modern sugarhouse may be one of its most enduring.

“It really changes the time, efficiency and quality of life for sugar makers during the season.”

Both the Hyperbrix RO and evaporator are being operated at the Proctor Maple Research Center as part of a research partnership with their manufacturer, Lapierre Equipment. Some of the improvements made at the Proctor this year, and others planned for the coming season, are being funded by a memorial gift from UVM alumni Robert L. Bickford, Jr. ('43) and his wife, Oletha “Lee” Thompson Bickford ('41). 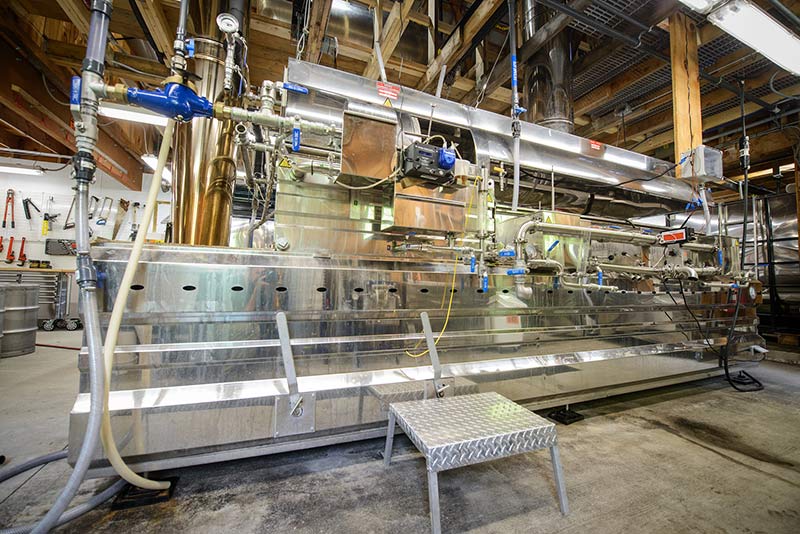