A Pioneer in the Lab and on the Land 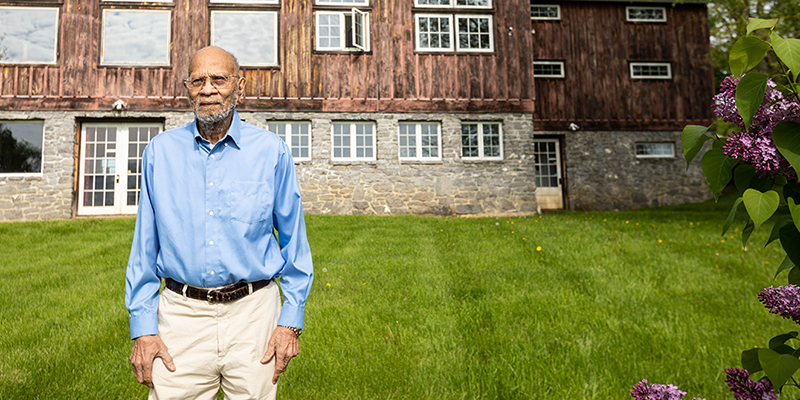 Dr. Clemmons at the Clemmons Family Farm in Charlotte. Clemmons became the second African American on the College of Medicine faculty; his wife Lydia was the first African American nurse anesthetist at UVM. Today, their property is transitioning to a multicultural center. “It’s very rare to find a farm that is owned by black people in New England,” says the Clemmons’ daughter. “It’s more than a family story. This is American history.” (Photo: Cat Catillo)

In 1962, when Jackson J. W. Clemmons, Ph.D., M.D., moved to Vermont to join the UVM Department of Pathology, he was only the second African American on the College of Medicine faculty, and the first to stay for any length of time.

Early on, a large farmhouse for sale in the town of Charlotte caught his eye. Public transportation stopped at Shelburne so, according to his daughter, Lydia Clemmons, the doctor walked the remaining six miles down a dirt road to reach the property. Locals called it the “white elephant house,” but Dr. Clemmons’ childhood experience apprenticing with his grandfather, a master carpenter, helped him see the possibilities beneath its surface.

“I didn’t look at this like an old run-down house. This was a good building that could be developed,” recalls Dr. Clemmons. He and his wife, also named Lydia Clemmons, who was the first African American nurse anesthetist at UVM, purchased the Charlotte property—148 acres with six historic buildings—and raised five children there.

Pioneering through rocky terrain was second nature for the Clemmonses. As a biochemist, Dr. Clemmons had been part of the lab team of the noted scientist Karl Paul Link in Wisconsin that developed the anticoagulants Dicoumarol and Warfarin. He earned a B.S., M.S., and Ph.D. from the University of Wisconsin, and was then accepted into Western Reserve University School of Medicine in Ohio and promised financial aid; but, the younger Lydia says, the school’s admissions office rescinded that aid offer when he arrived and the administrators realized he was African American. The couple pinched pennies to get by, and Dr. Clemmons received his M.D. in 1959. Three years later he came to UVM, where he practiced pediatric pathology until 1991.

Seven years ago, the Clemmons family began asking the perennial question posed by all farming families: Does the next generation want to continue on the land? Concerned that African Americans have, over the last 100 years, lost 93 percent of their U.S. agricultural assets, the family decided to preserve the property and launched Clemmons Family Farm, a multicultural center dedicated to celebrating African American heritage through the arts.

“It’s very rare to find a farm that is owned by black people in New England,” says the younger Lydia. “It’s more than a family story. This is American history.”

Last May, Dr. Clemmons was awarded an honorary degree at UVM’s commencement ceremony—recognition by the institution for his work as a pioneer and innovative leader, both at the University and in the wider community.