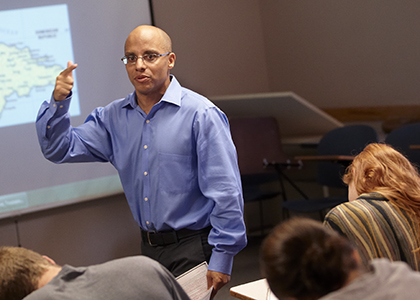 With humans and with history, a soft focus lens offers a transcendent quality that lets observers be swept up into beauty or myth or an idealized vision of reality. This has been the predominant view of Vermont’s relationship to the institution of slavery -- firmly abolitionist, groundbreaking in its 1777 constitutional ban on the practice. But in his new book The Problem of Slavery in Early Vermont, 1777-1810 Harvey Amani Whitfield, associate professor of history, examines a variety of primary documents from census records to runaway ads in local papers that reveal a more complicated pattern of beliefs and behaviors. Some blacks were free and able to exercise the rights of citizenship while some were sold, some held as slaves, de facto or otherwise.

Whitfield is clear, as he attempts to parse the motives and intentions of early Vermonters, that his goal is not to strip Vermont of its pride as a leader in the abolitionist movement, noting in his book that the 1777 provision “stands as an important monument to the slow legislative strangling of slavery in the North.” But neither is it appropriate to squint past the facts. “My argument,” says Whitfield, “is simply that it is not fair or good for people who are interested in black history to have an overly simplified view of what life was like in Vermont in the 18th century.”

The problem starts with the antislavery provision itself: it allows for the holding of children as slaves until the age of 18 for women and 21 for men. In terms of prohibition, Whitfield notes that the founders use vague, weak language. The article states that no adult born in this country or brought from overseas “ought to be holden by law, to serve any person, as a servant, slave or apprentice….”

“Maybe this seems like a minor thing,” Whitfield says of the choice of the word “ought” rather than “shall” or other declarative, “but language is important. These people aren’t stupid -- they knew what they were doing.”

Finally, in terms of the 1777 constitution, there were no enforcement mechanisms in place, leaving the law open for abuse. According to various records, it was the most prominent and respected citizens of Vermont who made no secret of slaveholding. Stephen Jacob of Windsor, a Yale graduate, member of the legislature and eventual Supreme Court judge, for instance, is named in one of the bills of sale that appear as primary sources in the book, for the slave Dinah who was purchased at the age of 30.

In one of the most perverse and contradictory stories Whitfield cites in the book, Jacob turned Dinah out of his home when she became infirm after 17 years of service. The selectmen of Windsor sued Jacob to recover damages for the cost of care of his former slave, offering the bill of sale as evidence of his responsibility. Jacob’s attorney argued -- successfully -- that the document was void because owning a slave violated constitutional law.

Yet Whitfield is quick to note the story of Pompey Brakkee, an adult slave who successfully filed a civil court case against his owner, Elijah Lovell, who was summoned to court three times without appearing. Though documentation of the case is scant, Brakkee was awarded £400, “an astronomical sum,” says Whitfield, presumably for unpaid wages. “We don’t know for sure, but it’s so tantalizing. In one way it shows this person was held as a slave after 1777 but then it shows that if a black person knew about this and found a friendly court he could not only get his freedom but apparently a lot of money. This is my big overall point -- abolition in Vermont is a process. It takes 30 years.”

What inspired Vermont’s founders to denounce the practice of slavery in principle but not practice, even tacitly approving child slavery? It’s impossible to know, Whitfield says, though there appears to be a mixed bag of motives conveyed both by their actions and inactions. Clearly natural rights philosophy, stated in the constitution, speaks to their call for freedom. And yet, Whitfield argues, these same ideals that have colonists at war against the British crown, with their rhetorical metaphors of political enslavement, fundamentally distanced the founders from people who were actually enslaved.

Whitfield writes that Ethan Allen, “assiduously argued that the American colonies ‘must now sink to slavery, poverty, horror, and bondage, or rise to unconquerable freedom, immense wealth, inexpressible felicity, and immortal fame.’” This thinking is well documented by Whitfield and other historians and led to a “tortured logic” of whites blaming blacks for their own enslavement because they lacked the virtue to resist. “When you have those views of a group of people,” Whitfield says, “how can you ever consider them to merit equal citizenship?”

Looking back to the case of Dinah, before suing Stephen Jacob, the town of Windsor tried to simply run the woman out of town, but she refused to leave. It was only when her care became a liability that her ownership by Jacob became an issue – financial rather than moral. Whitfield surmises that the risk of children becoming a similar public burden may have been the reasoning behind holding them as slaves.

But in this patchwork of attitudes Whitfield notes that religion certainly played a role, possibly influencing the founders and certainly the burgeoning abolitionist movement over time. He cites the 1777 case of Captain Ebenezer Allen, whose scout had captured a black woman and her child with the British on Lake Champlain and formally set the two free, “being conscihentious that it is not Right in the Sight of god to Keep Slaves.”

Racism inevitably played its role -- Whitfield says the underpinnings of abolition, at least for some, may have been the desire to abolish not just slavery but blacks from Vermont. The proposed 1791 Negro and Molatto Act was an attempt to both enforce the return of escaped slaves to their owners and to drastically reduce the rights of free blacks -- the crime of “strolling from town to town” would be punishable by several years of hard labor. While the law failed to pass, 31 percent of legislators supported it, establishing that such attitudes were widely held.

Whitfield acknowledges that the framers of Vermont’s constitution were breaking new ground, that they had no legal models from which to draw. Sharpening the focus reveals largely unsurprising things, that history and humanity are flawed. But Whitfield believes it’s worth looking. “Racism exists in Vermont. I know that’s something that people don’t want to talk about, now or then,” he says. “I’m not saying it’s terrible, but I am saying if we ignore it I don’t think that does us any favors for the future.”