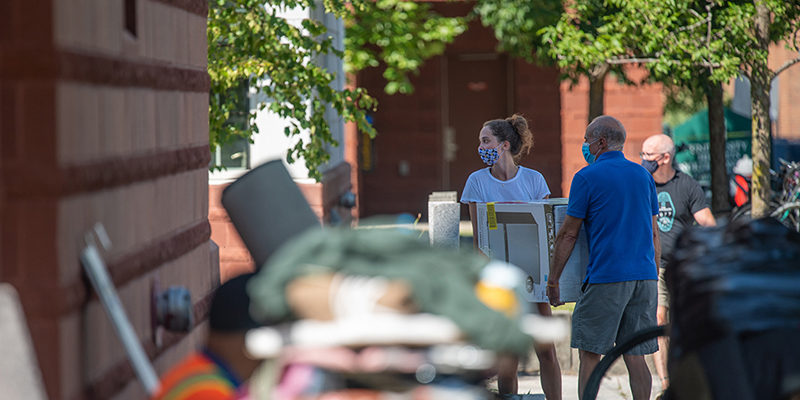 Joyful, tearful—with a tremor of anticipation and/or apprehension here and there — dropping kids off at college is a milestone for parents and new students alike. Children of UVM alumni have grown up with green-and-gold around the house, made visits to Burlington for games or college reunions or skiing. So, even masked in the midst of a pandemic, Vermont feels like a second home to these new students. And to their UVM alumni parents, it's a trip back in time, rich in nostalgia for what was and pride in what awaits. We checked in with a circle of them as they unloaded boxes from their cars and moved into residence halls last week. 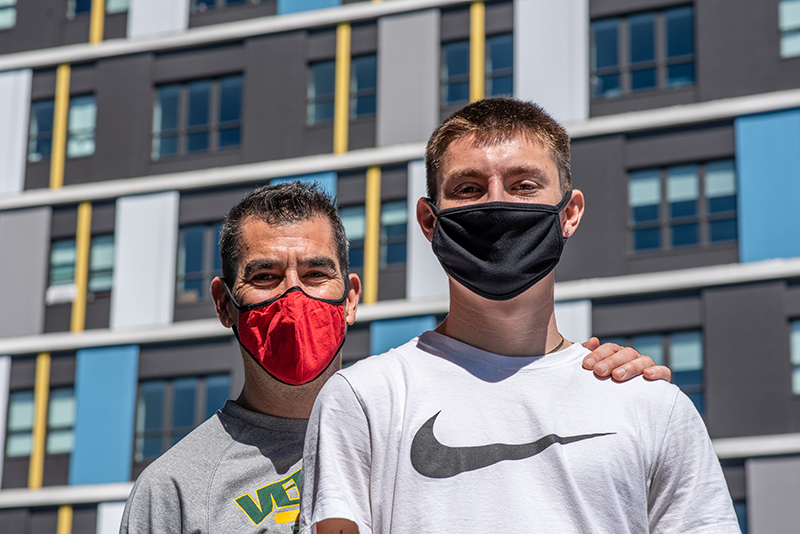 “My dad said, ‘Follow what you want to do,’ but my granddad has been trying to get me to be an engineer,” Alex says. “I went down that road myself, but there’s inspiration there too.”

Alex was born and raised in Stowe, Vermont, and his Uncle Bill, William Curt Reichelt III, is director of UVM’s ski program — so it’s not that surprising that, when Alex is not studying, he loves to ski. “It’s a huge part of what I do,” he says. “Freestyle — jumps and rails.” Alex doesn't race. “He was never interested in red, blue, red, blue, red,” Kurt explains. “He just wanted to go upside-down.”

As for this upside-down historical moment with COVID-19, Alex says. “It’s going to be day-by-day.” Then he points to his mask. “It stinks that we have to move in like this. But we learn a lot under these conditions — about how to manage,” he says. “Just follow the guidelines so everyone stays safe until we get back to life as normal.” Then he adjusts his mask again. “Normalish,” he says. 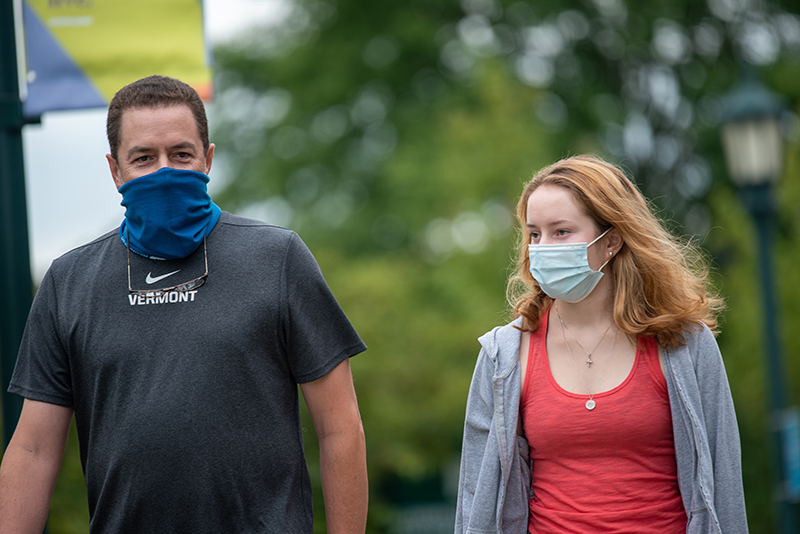 Victoria Gonzalez ’24 (above right) looks out across the quad in front of Wright Hall. “Yes, I’m proud to say I am Latina,” she says. “It took me a while to say: ‘I love listening to Spanish music.’” And then she looks at her dad, Phillip Gonzalez ’91. He helped her—and others at UVM when he was a student here—develop the same pride. Born in Puerto Rico, he moved to Massachusetts at age seven — and started at UVM in 1987.

“As a kid in Boston, I got used to not being around a lot of other Latinos,” he recalls. “But for a lot of other Latino students at UVM, back then, especially those coming from inner city New York and Philadelphia — it was hard.” Which is why he and a friend founded the Alianza Latinx student club on campus.

“At the time there was no Latino club, so we got together with the faculty of the ALANA program and we started working on it sophomore year,” he says. He recalls going with other Hispanic students to Montreal to find familiar food and music — and then he was part of the takeover of the president’s office in Waterman Building in April 1991 to protest racism. “It’s a thrill, almost 30 years later, to see the club still here and thriving,” he says. “We had trouble getting 16 students to a club meeting; now 350 come for our annual fundraiser.”

He’s brought his daughter to Vermont and UVM many times. “I had my first ‘tour’ when I was 12 and I instantly fell in love,” Victoria Gonzalez says. She got into seven other colleges but there wasn't any difficulty in choosing UVM. “The lake, the environmental vibe, the fresh produce, the energy,” she says, listing some of the qualities she likes about the campus and city. She plans to major in a science and go pre-med. “I want to be a doctor,” she says, “and a Spanish minor — a lot of my family speaks Spanish, and I love the language, and hope to be fluent by the time I graduate.” 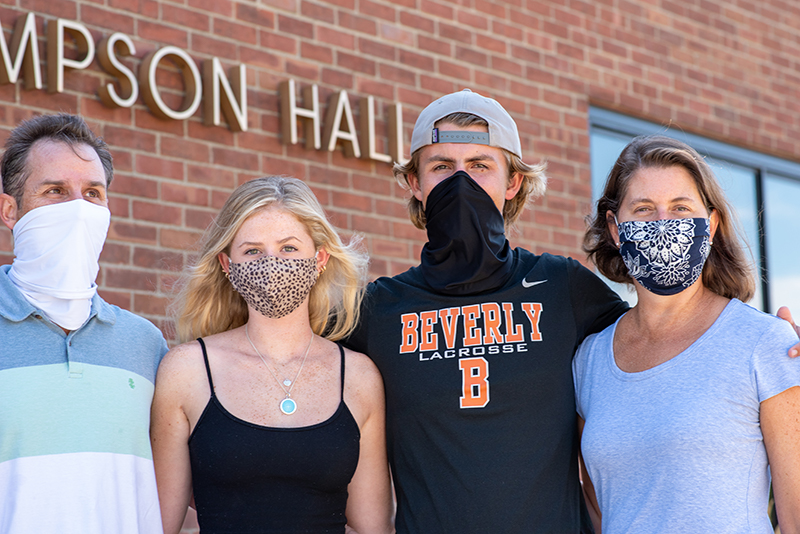 Growing up outside Boston, Corinna Cademartori ’24 (above, second from left) visited Burlington every year — coming to town for UVM basketball games. “One of my earliest memories is seeing the big Catamount mascot,” she recalls.

Her parents, Emilie and Gregg Cademartori, met at UVM and both graduated in 1994. “We met on Halloween, sophomore year,” Gregg recalls. For a week, they only knew each other by their costume names: “Jeannie” from “I Dream of Jeannie,” and “Dieter” from the SNL skit “Sprockets.”

“We became a UVM family and we always kept coming back for basketball games,” says Emilie, “the kids with foam cat paws and face paint.”

Now, Corinna is continuing the family’s BTV connection. She’ll be starting in the UVM nursing program. “I’ve been doing volunteer work to help others my whole life so it’s a good fit,” she says. “I’d like to work in an ER, a fast-paced setting.” She feels the pain and loss of COVID-19. “But it’s getting me ready for the real world in a hospital,” she says. “I almost feel like the pandemic is setting me up to be successful as a nurse because I’m going in at such a hard time.”

Her parents do own up to encouraging Corinna to attend UVM. “I can’t say we didn't have an influence,” says Gregg, laughing, and he’s particularly excited about the opportunities for his daughter to train as a nurse. “Having a clinical setting right outside your dorm door is a great fit, and not something you find at many other schools,” he says.

For Corinna, one of the draws of UVM is Lake Champlain. “We used to drive by the lake as kids — but I’ve never gone swimming in it,” she says. “I can’t wait to get in the water.” 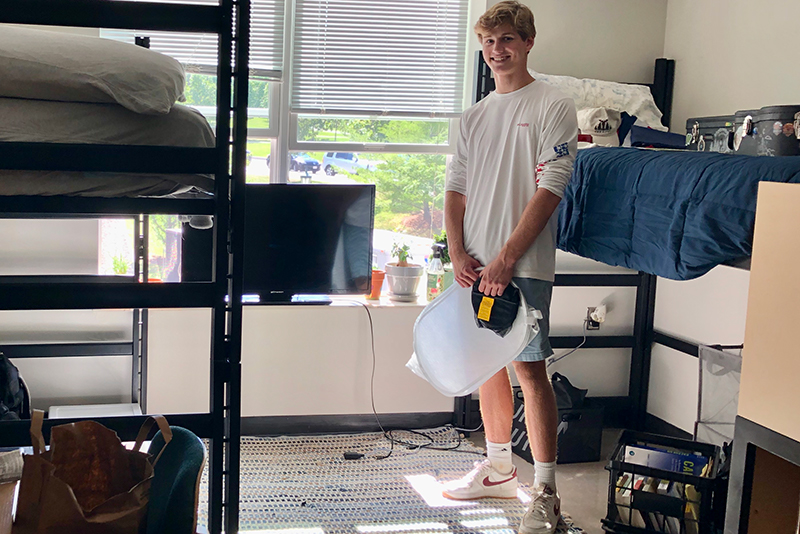 It’s move-in day for many first-years—and Lars Jensen ‘24 (above) is looking for his wallet in the car while he waits for clearance to move his stuff into University Heights North. “That would have been a pretty major thing to have not brought with you,” says his dad, Stew Jensen ’90, cheerfully and being helpful in that way that 18-year-olds find, well, you know.

Still Lars—planning to be a mathematics major—does stand tall and smile at a reporter who interrupts to ask him about his interest in backcountry skiing. “Yep, love it,” he says. “Just getting started.”  Actually, he’s been skiing for years, “at Cochran’s when he was really little, then Bolton, and for the last five years at Sugarbush,” his dad says. It’s in the family to ski: Stew and his wife Lisa Jensen ’89 G’96 — now assistant director of the Vermont Attorney General’s Consumer Assistance Program housed at UVM — met in a ski course Stew was teaching his own freshman year at UVM. The family’s been on the slopes ever since, including through Stew’s work. “My ad agency primarily works with ski resorts,” he explains.

Following some of the same trails as his dad, Lars says, "I am curious about the mathematical side of business and am curious to learn how mathematics can be used to help businesses run more efficiently. I am also planning on getting my MBA at some point after I graduate from UVM."

But Lars has cut new terrain for the family with his backcountry interests. “Last year, he got skins, touring bindings, touring boots — and off he went into the woods,” his dad says. “It’s great for him, but I just love chairlifts. If God had intended us to walk up the mountains, he wouldn’t have invented the chairlifts.”

The reporter had to run to another interview before Lars got the go-ahead to start unloading—or to confirm the location of the wallet. But later pictures, sent along from his proud parents, show a smiling young man, in his new dorm room, who looks ready to find his own way through UVM and the world.

Jay Welsh ’89 enjoys ribbing his son, Patrick Welsh ’24 (middle, above). Dropping him off at Harris Hall, he jokes, “Don't worry, I’ll be back every weekend.” But Pat’s mom, Gail Welsh ‘86, jumps to her son’s defense, laughing. “Oh no you won’t,” she says. “I promise, Pat, I won’t let your dad out of the house unsupervised.”

Still, it’s clear the whole family loves being in Burlington and being on campus. Gail and Jay met at their first job in Hartford, Conn., after graduation from UVM — and they’re excited for what lies ahead for their son. “It feels great to be back here,” says Gail. “The campus looks fantastic,” says Jay, noting the new science complex and central campus residence hall. “There are a lot more buildings.”

One big change for Gail: “The Cat buses,” she says. “We had to walk everywhere. But it’s the same vibe, the same welcoming vibe. It feels like home.” For Pat, his on-campus home is on the first floor of Harris, just down the stairs from where his dad was as a freshman. He plans to major in Business Administration, and he’s not sure what extracurriculars he’ll take up — but he’s clear about how he feels about following his parents’ footsteps at UVM. “I’ve always loved Vermont,” he says. “It didn’t take any convincing to come here.”