At risk: those who watch and frequently cook from scratch 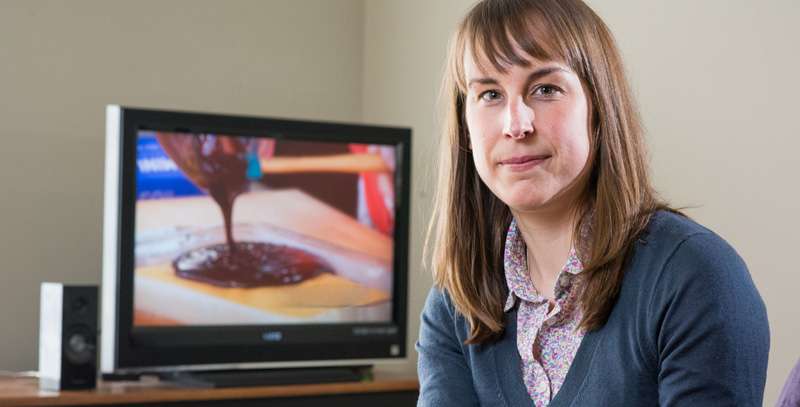 If you’re a fan of food television, it’s fine to be entertained by the programming, but if you take the rich recipes favored by the Food Network, the Cooking Channel and others into your own kitchen, you’re at risk of putting on pounds, according to a study just published online by the journal Appetite.

“The message is clear,” said Lizzy Pope, assistant professor in UVM's Department of Nutrition and Food Science, the study’s lead author. “Food TV should be a viewing experience only, not a cooking experience.”

The study asked 501 women, aged 20 to 35, where they obtained information about new foods, how frequently they cooked from scratch, and what their heights and weights were.

Women who watched food TV and cooked frequently from scratch had a higher body-mass-index, or BMI – weighing on average 11 more pounds – than those who obtained information from sources like family and friends, magazines and newspapers, or cooking classes. Those who frequently cooked from scratch but didn’t watch food TV also did not have higher BMI’s.

Significantly, women who watched food television but didn’t cook from scratch failed to see their viewing habits translate to a higher BMI.

“Those who are watching just for entertainment are fine,” said Pope, who led the study, titled "Viewers Vs. Doers: The Relationship Between Watching Food Television and BMI," as a post-doctoral researcher at Cornell University’s Food and Brand Lab.

The reason: the recipes on food TV “are not the healthiest and allow you to feel like it’s OK to prepare and indulge in either less nutritious food or bigger portions,” said study co-author Brian Wansink, director of the Cornell Food and Brand Lab.

A study of British food TV found that the recipes used were higher in calories and fat than World Health Organization recommendations.

The study also found a correlation between higher BMI and women who obtained information from social media.

The study suggests that there is a clear need for self-examination on the part of the food networks, Pope said.

“If we had more food shows that used healthier recipes and showed how they can look good, taste good, be exciting and be social, which is what these shows illustrate, we could have an impact on public health,” she said. “Food show executives and hosts need to realize they are social role models and have a role to play in battling obesity and health care costs. They can be part of the solution or continue contributing to a major problem.”

The findings also suggest that cooking from scratch, which other studies have found correlates with lower BMI, is not the “be-all end-all for healthy eating,” Pope said. “It definitely can result in healthier food than eating out all the time, but only if you're cooking healthy recipes and healthy food.”