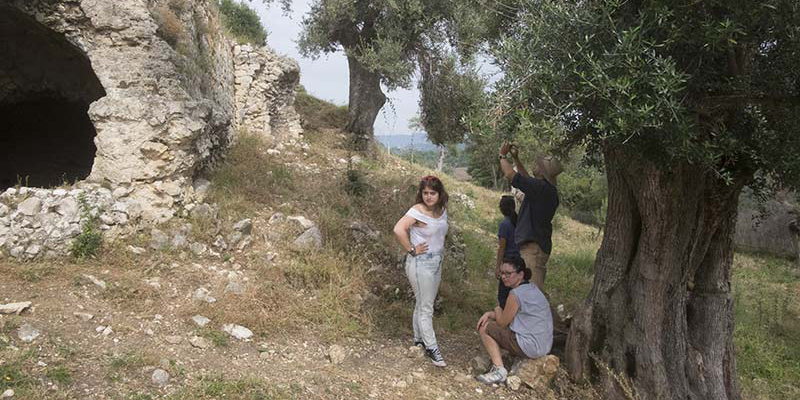 Classics professor Mark Usher was nearing the end of a visiting scholar stint at the American Academy in Rome when he decided to take a break from working on his latest book to hike the nearby Sabine Hills with his wife, staying at a series of “agriturismi” – small farms that host guests, B&B style – along the way.

He was particularly keen on one a UVM colleague had recommended, Le Mole sul Farfa, which boasted personable owners and an archeological dig of an ancient villa.

When he arrived at the dig site near the agriturismo, “My jaw dropped,” Usher says, not only because of the Roman mosaic poking through the grass, which signaled its obvious significance.

“What really got my attention,” he says, “was the grove of ancient olive trees” next to the ruins, huge, gnarled and still producing olives, which he learned later were more than 1,500 years old.

“That was the taste of ancient Rome on those trees,” he says.

By the end of his three-day visit, he knew not only that Le Mole would anchor the chapter on Roman agronomy in his new book, but that he could build a one-of-a-kind multi-disciplinary course around the site, incorporating classical history, food systems and sustainable agriculture, one that  – as a farmer who'd practiced small scale agriculture for 20 years, as well as a classicist  – he was uniquely qualified to teach.

Just two years later Usher’s book, on sustainable systems in antiquity, is nearing publication, and three lucky students have just returned from a beta-test version of the course, launched this summer. 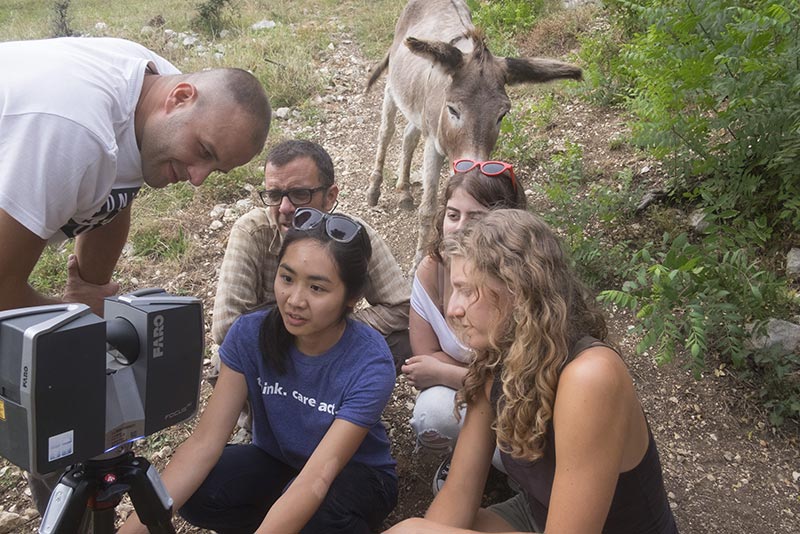 Senior Geology major Melinda Quock and Environmental Studies majors Ariella Mandel and Amanda Brown, both seniors, spent two weeks at Le Mole helping professional archeologists excavate the dig site, a Roman “villa rustica” – a kind of working farm that formed the backbone of productive agriculture in ancient Rome, where elites would relax when they weren’t at their beachside estates on the Bay of Naples.

Students, who had read Usher’s book chapter and discussed it informally during their stay, also helped archeologists produce 3-D images of the site using laser scan technology, created a GPS map of the olive trees, and carbon-dated olive pits retrieved from the dig.

Back to the land, Roman-style

What makes the site so resonant for Usher, for both his book and the evolving class, is what he describes as its continuity and contiguity.

By continuity, he means the relationship between what the ancient Romans were doing 2,000 years ago and the Italian government’s policies today.

“Romans were the original ‘back-to-the-landers’ and were always trying to keep small farmers on their land as part of the ancient Roman ideal,” Usher says.

That’s a “distant echo” of the current Italian government’s program of tax incentives for agriturismi, which also promote farming by allowing owners to put up guests, like Usher and his wife, if at least half the property’s income comes from agriculture.

By contiguity, Usher means the cheek-by-jowl location of the ancient villa rustica and the modern agriturismo, so close that a key point of Usher’s new book and the course – that the sustainability movement, far from springing full blown from contemporary culture, has roots that go back millennia – is inescapable. 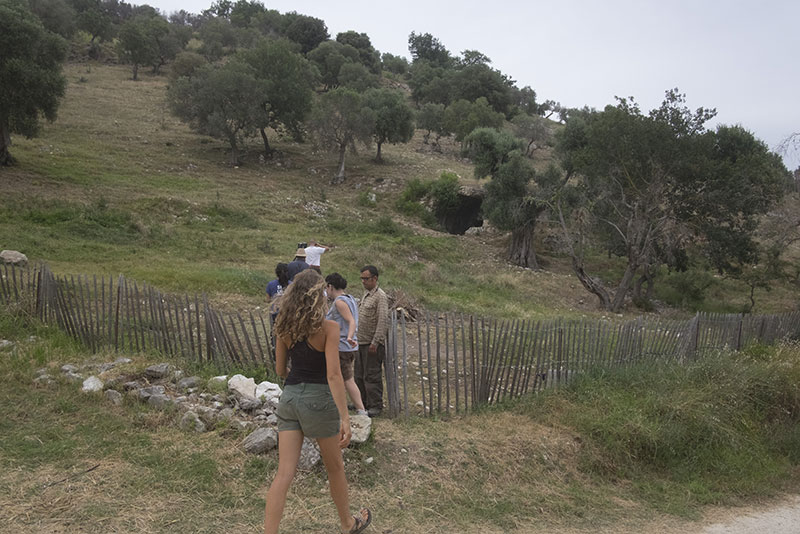 As if the dig site and olive trees weren’t enough to recommend it, Le Mole and its environs have another ace up their sleeve. In Roman times, the villa may well have belonged to the Pompey the Great, one of Rome’s most famous military leaders and statesmen.

The evidence, which Usher finds persuasive, lies in the etymology of the town where Le Mole is located, Mompeo, likely a combination of “mons,” the Latin term for hillside, and the adjective “Pompeianus” – relating to Pompey – and by countless references in a centuries-old registry of local properties to a “fundus,” Latin for farm, “Pompeianus” at the location of the dig.

In addition to giving legs to the fundraising effort to finance the ongoing excavation, the connection to Pompey makes the site even more resonant from an educational perspective by underscoring Usher's theme that the concept of sustainability has ancient roots.

By refusing to buy up and agglomerate small parcels of land, instead contenting himself with carefully farming a smaller lot, Pompey was part of a movement, which might be taking place in the United States today, to slow the growth of “latifundia," Rome’s equivalent of large factory farms.

If the summer course was a beta test, the grades couldn't be better.

"Overall my experience in Mompeo was incredible, filled with a diverse array of opportunities to learn from knowledgeable and engaging teachers,” Brown wrote in her evaluation of the course. 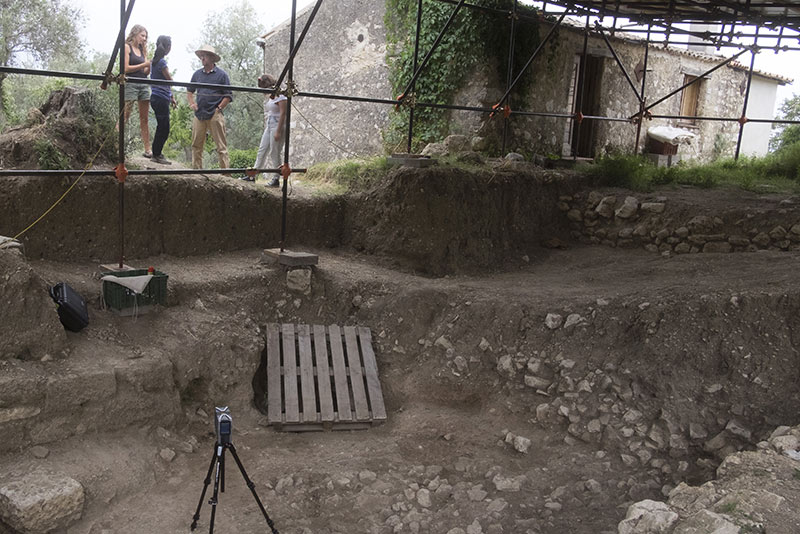 As Environmental Studies majors, Brown and Mandel found the Romans’ commitment to small-holder farming compelling from a food systems perspective and were fascinated by the biodiversity implications of the ancient olives, which are distinct from genetically similar modern varieties. Geology major Quock, was moved by the way of life at the agriturismo and got to exercise her disciplinary chops with the carbon dating project. All were highly engaged in the dig and loved the family atmosphere created by the agriturismo’s energetic owners, husband and wife Stefano Fassone and Elisabeth De Coster.

But what about the eventual course that will combine archeology, food systems and sustainable agriculture with in-depth study of the site’s evocative ancient history, taught by Usher?

“I think you’d have to be pretty lucky to be one of those students who gets to come,” says Brown.

The archeological excavation and development of the course are being funded by the Office for the Vice President for Research, the UVM Humanities Center, the Environmental Program’s Ian Worley Award, the College of Arts and Sciences and by an Engaged Practices Innovation Grant from the Office of the Provost. Usher is the Lyman-Roberts Professor of Classics.