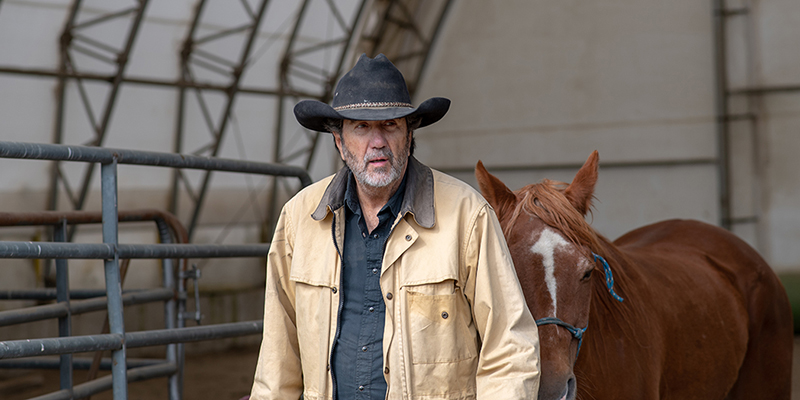 You could call Tim Hayes, Class of 1967, a horse whisperer. After a successful career producing and directing commercials, life pivoted when he climbed on a horse for the first time. Today, he runs a teaching farm in Johnson, Vt., and runs clinics on equine therapy at UVM. (Photo: Josh Brown)

When alumnus Tim Hayes, Class of 1967, climbed on a horse for the first time, at age forty-eight, his life pivoted. The lifelong New Yorker was already at a turning point when, on the heels of a divorce, he traveled out west. Then, at a friend of a friend’s cattle ranch, he saddled up and everything changed. “Something happened,” Hayes says. “I thought, ‘I want this, I need to have this in my life.’” With a laugh, he adds that his next thought was, “I don’t know how. I live in New York.”

Asking Hayes just what it was about that moment feels a bit like asking someone why a sunset is beautiful. But, you know, it must be asked.

For starters, Hayes says, there’s the wonder of having a thousand-pound prey animal trusting you to sit on its back. For that first ride, Hayes had the advantage of a particularly impressive horse, an Idaho state roping champion steed. “It was like the horse could read my mind,” Hayes says. “I was riding and I was realizing that I was going too fast and it was like the horse was saying, ‘Gee, I think I should slow down,’ and the horse slowed down, picked it up from my body language.”

Across the past couple of decades, Hayes has trained himself, and many others, to become fluent in that rare language connecting human and horse. He’s the author of "Riding Home: The Power of Horses to Heal" (St. Martin’s Press), a top seller among books in the niche, and he teaches clinics in Vermont and throughout the nation in the ways of natural horsemanship and equine therapy. You could call him a horse whisperer. In fact, Robert Redford, Hollywood’s horse whisperer himself, wrote the foreword for "Riding Home."

Hayes is tall and lanky, easy-going, wearing a black western shirt as he climbs out of his pick-up at the UVM equine center on Spear Street. He seems a likely horseman now, but was once a very unlikely one. He grew up in Greenwich Village, where his father was an NYC ad man of “Mad Men” vintage. Hayes headed north to Vermont for college, where he majored in psychology and played varsity basketball for the Catamounts. Post-graduation, he took a $125-per-week job splicing film for commercials back in the city, loved it, and soon found his way into other aspects of the business, launching what would become a very successful thirty-five-year career producing and directing commercials. His Alka-Seltzer “I can’t believe I ate the whole thing” and “Try it, you’ll like it” spots have a sure place in seventies pop culture.

Looking back on phase one of his professional life, Hayes says, “Commercials took me all over the world, they paid well, it was fascinating. I had no desire to do anything else until I sat on that horse.” 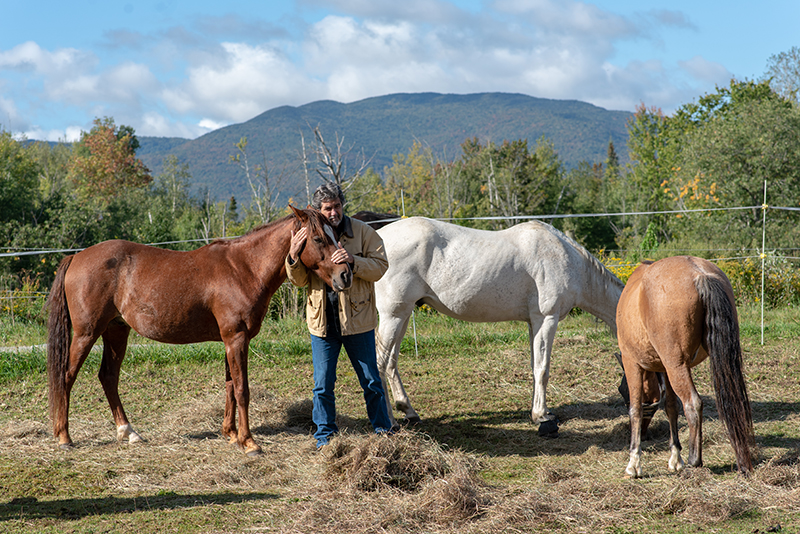 Though he didn’t see it as a second career—“some people like to play golf, I like to hang out with horses”—Hayes kept following the trail around the next bend. When a riding stable opened on 23rd Street in Manhattan, of all places, suddenly he had a place to slip out of his jacket and tie to ride in the evenings after work. In a few years he was giving his finances a hard look and finding a way to live the dream—take Social Security early, rent out his apartment in the city—and live out on Long Island working around horses full time. Hayes built his reputation among horse folk in the Hamptons. Your horse bites you? Ask Tim.

Hayes’s orbit began to tilt back toward Vermont when he met Stephanie Lockhart, also an accomplished horseperson and teacher, eight years ago. They married last year and live in Johnson, Vermont, where they run The Center for America’s First Horse, a seventy-acre teaching farm Lockhart founded to help preserve Spanish mustangs. Just three thousand of the breed remain in the world, and twenty of them live in Johnson under Tim and Stephanie’s care.

Hayes’s return to Vermont also included a return to his alma mater, where he has taught clinics on equine therapy and natural horsemanship in the Department of Animal Sciences. Hayes is self-deprecating about his prowess as a student and expresses some wonder that he’s now in the role of teacher. “I feel so grateful and proud. My years here in college were a very formative time for me of growing up. I loved UVM. I just loved it,” Hayes says. “To come back fifty years later, from a student to a teacher is pretty nuts.”

Hayes is increasingly focused on equine therapy these days, leading clinics for both patients and practitioners. The mind shift that being around horses can produce is similar to what Hayes experienced himself with the epiphany of that ride in Idaho years ago. He describes what the trust and acceptance of a horse can mean to a child with autism, a military veteran dealing with the aftermath of combat, an inmate, or an addict in recovery.

Working with a horse is also revelatory when it comes to highlighting ingrained behaviors or patterns of thinking. Hayes notes that so many mental/emotional issues are rooted in a sense of inadequacy, a lingering sense that we don’t measure up in some way. It’s another way a human could stand to learn something from a horse. “Horses have no ego,” Hayes says. “I never met a horse who thought, ‘I wonder if I’m a good enough horse.’”