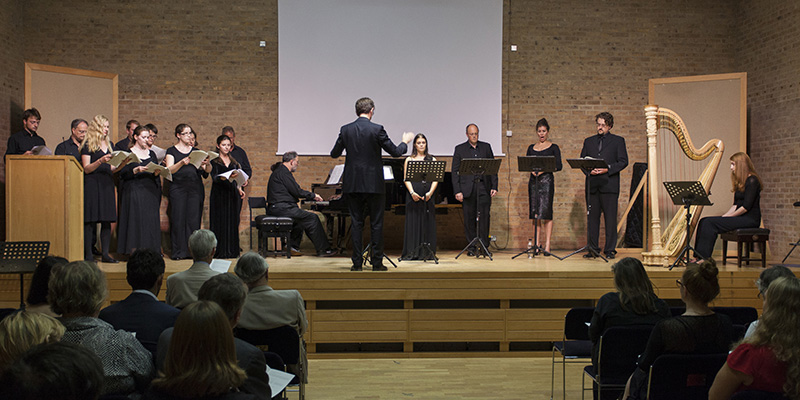 The entirety of the first scene of the opera 'Neron Kaisar,' with libretto by UVM classicist Mark Usher, was performed at Oxford, England Sept. 18. Watch the performance below. (Photo: Allan Staley)

The legend surrounding the Roman emperor Nero is that he neglected his people and his empire, fiddling while the city around him burned. That’s likely largely myth, but what is fact is that Nero was a singer and a kitharode (he played the lyre), whose greatest yearning may have been to be recognized as a talented performer. But Nero’s ambitions translated poorly across the rest of his life, leading him to poison his stepbrother, carry on an incestuous relationship with his mother and later murder her, kick to death his pregnant second wife and eventually commit suicide.

It’s a story that Mark Usher, chair of the Department of Classics, is turning into a poetic opera in ten scenes. The first, “Incipit,” had its premiere at the meeting of the Archive of Performances of Greek & Roman Drama, “Performing Epic into the Twenty-First Century,” in Oxford, England, on Sept. 18. Combining Greek, Latin, and English texts and translations, Neron Kaisar — the Latin transliteration of the spelling of Nero’s name in Greek — is undeniably unique.

“What makes this project different,” says Usher, “is it’s a pastiche form that is a modern application of the very ancient technique of centonizing, or creating a cento — which means a patchwork — so I draw from all sorts of famous poems by ancient authors.” Those include Sappho, Virgil, Archilochus, and Seneca, among many others. The characters sing sections of poems and texts as lines of dramatic plots.

“They’re communicating through actual poems, seeing themselves, as it were, as life imitating art,” Usher says. “You have characters singing to each other famous poems from antiquity in a way that’s believable, given the way the plot is structured.”

The Oxford version of "Incipit" is scored for four solo voices — Nero; Agrippina, his mother; Seneca, the philosopher and Nero’s advisor; and the Sibyl, a prophetess — along with a chorus, and is joined by harp and piano accompaniment. The music was written by John Peel, chair of the Department of Music at Oregon’s Willamette University. Usher writes the libretto first and then Peel composes the music, bearing in mind the articulations and metrical forms of the written word (Usher calls it “complicated music” and adds, “looking at the score will make you want to pass out”). Francie Merrill, a second-year honors college Latin major who studies Greek, taught herself the International Phonetic Alphabet and transcribed the Greek sections so that the singers performing it would use the correct pronunciation. There will eventually be nine more scenes, each one roughly 15 minutes in length and showing an independent vignette. Usher and Peel, both of whom have to fit in Neron Kaisar around full academic schedules, hope to complete the work sometime next year; to date, they’ve written and composed roughly 25 percent of the remainder of the opera, though Usher says the libretto is all written in his head.

“I’ve preselected great poems that I want to put on the lips of Nero at the right moment — when he kills his mother, for instance. I know exactly how that one’s going to go,” he says. For Usher, part of the fun of the writing is the exercise in intertextuality.

“Sappho was not talking to Catullus directly” since the former was Greek and the latter Roman, their lives separated by five centuries, he says, though Catullus did hear things in Sappho that he later reused. Usher, in turn, included both re-workings in an exchange between Nero and his mistress, Poppaea.

“There’s more than meets the eye,” he says of the libretto, noting that it stands on its own literarily. And it’s not just a biographical opera of Nero’s life. Though one scene focuses on a musical competition between Nero and several soloists who take him on, the subtext is a recurring theme throughout the opera: the “glories and pitfalls of poetic and musical ambition.” It’s also a subtle dig at today’s obsession with pop celebrity in the United States, as reflected in shows like American Idol and The Voice. Though Neron Kaisar shows the tragedy of Nero’s life, it also shows him as the “flamboyant, Liberace-like character” he was — someone without full awareness of himself or others, seeking recognition as an entertainer but lacking in innate talent and poetry.

Usher was on hand for the Oxford performance, and gave a preconcert lecture. Afterward, he said “Incipit” was well received, and that he found the entire experience “tremendous, astounding, mind blowing.” In a post-performance discussion with the audience, he realized how the words’ intertextuality contrasted with the music, which was through-composed, developing essentially like a symphony.

“The result is like a quilt,” says Usher. “The text is the patchwork front — detailed, colorful, intricately stitched together — and the music is the back of the quilt, as it were, made out of whole cloth, binding it all together.”

For further information about 'Neron Kaisar,' visit its website
See the program from the Oxford performance, and read the libretto's text. 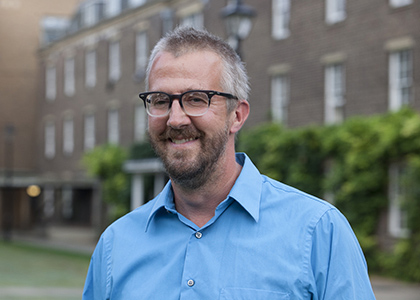 Mark Usher, who was on hand for the Oxford performance, called the experience of seeing his work come to life, "tremendous, astounding, mind blowing," (Photo: Allan Staley)