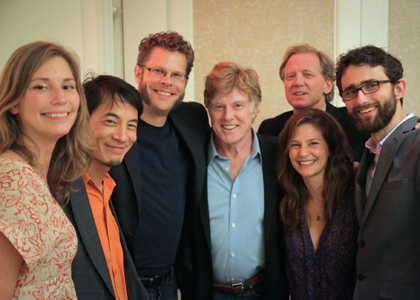 Jill Rosenblum Tidman ’94 keenly remembers the moment her worldview shifted in Professor Stephanie Kaza’s introductory environmental studies class. The alumna had grown up in St. Louis with a solid education and caring parents: “I felt like I kind of understood the world.” Yet, as the discussion in Kaza’s class that particular day homed in on a litany of environmental degradation, the barrage of bad news pushed her to a personal tipping point. “I got mad. I could not believe I didn't know the trajectory we were on. I felt cheated of information,” she recalls. “I thought, ‘If I don’t know this coming from my background, there’s got to be a lot of people who don't understand what is going on with the planet.'”

A philosophy major, Tidman rounded out her classes for an environmental studies minor and made a commitment. “It was very clear to me that there was nothing else for me to do in this life but to try to get the information out there, so that we have a chance of changing course. I felt a responsibility and there was no turning back.”

Post-graduation, that put Tidman’s career on a green course that included business, fundraising, writing, government, event planning and eventually promoting environmental causes through the arts. Her latest effort in that regard is Watershed: Exploring a New Water Ethic for the New West, an hour-long documentary she co-produced with Jamie Redford under the auspices of the Redford Center.

Sweeping views of sinuous river and red rock canyon open Watershed as Robert Redford’s voice, a timbre that in itself evokes the American West, lays out the factual backdrop: “The Colorado is the most dammed, dibbed, and diverted river in the world… a machine supporting the needs of 30 million people.” And, perhaps the saddest fact of all — the Colorado now dries up some 90 miles short of its natural end at the Gulf of California. What’s a filmmaker to do?

“We felt like the best way to approach this was to really focus on the human dimension of the story through people who have a stake in the Colorado River Basin,” says co-producer Jamie Redford (Robert’s son). “Our action item is to return that flow to the Gulf of California and a baseline awareness story that people can connect to on a human level and on an emotional level is the best start to encouraging people to take action.”

Those human stories introduce viewers to a rancher in Durango, Colo., a county commissioner of the Navajo Nation in Shiprock, N.M., and a bike messenger in Los Angeles, among others. While they’re all bound by their dependence on the water supply of the Colorado River Basin, they’re also united by a sense of commitment and personal action. That positive slant, a light in the doom and gloom, is essential to the film’s power as a motivational tool, Jamie Redford believes. “We’re almost at a crossroads where the decision is are we going to throw our hands up and go into acceptance and denial or are we going to continue to do what we can?”

It’s an approach Tidman has pursued in the six years she’s worked on films with the Redford Center — making environmental issues relevant, human, and leaving audiences with both a sense of hope and a path for action. For Robert Redford, who has portrayed the likes of the Sundance Kid, Jay Gatsby, and Bob Woodward, environmental activist may prove to be one of his greatest roles. Film is his natural vehicle as he continues to leverage a movie star’s fame and fortune to create societal change. “He is incredibly supportive and very involved,” Tidman says. “All of this is happening because of who he is, his vision, his advocacy, and his belief that art really can have an impact on people through storytelling.”

Out in the world

At home in San Francisco these days, Jill and Wil Tidman ’95 are a very busy two-career, two-kids (Quincy, two; Stella, ten months) family. Wil, a psychology major and varsity soccer player at UVM, has worked in sports and entertainment marketing with Nike and Red Bull, and now runs media production for GoPro Camera. “It’s a fast-paced situation right now,” Jill Tidman says with a laugh, adding that working at home, working nights, and having relatives happy to visit San Francisco to babysit all help with the juggling act.

Her initial connection to the Redford Center came about through work on climate change in local government with then-mayor of Salt Lake City Rocky Anderson. When Sundance Resort hosted a national mayors’ conference on climate change, Tidman was brought in to brand the event and make it happen. A green poetry slam contest was among the initiatives she initiated that contributed to the conference’s success. And that would lead to her first film project with the Redford Center, an executive producer role in creating Fighting Goliath: Texas Coal Wars.

Now that Watershed is completed and lined up for screenings from Istanbul to Barcelona to Burlington, Tidman enjoys the satisfaction of seeing the work go forth, harboring no regret that she can’t make it to every festival, city, or campus where it’s shown. “For me, it’s much more fulfilling to know this is happening than to be there,” she says. “I like getting it done, making the most of it, figuring out ways to get this film out in the world and in front of people.”

Those who see Watershed will meet a young woman on an Outward Bound rafting trip passing through the hush of Echo Park at the confluence of the Green and Yampa rivers. With a tone that suggests equal parts wonder and betrayal, she says, “I was really shocked that the Colorado River does not reach its delta. I knew that there were dams, but I thought that people made minor changes without interfering with the river as a whole. I had no idea it was all gone before it reached where it should go.”

That sort of revelation is what it’s all about, as Jill Tidman well knows.